About a month ago, Harry Soo returned home to Diamond Bar, Calif., from a trip to Alaska, where he fulfilled the latest in a series of lifelong dreams: To cook a steak under the Northern lights. The steak was from a musk ox and the scenery didn’t disappoint. After judging a competition there and teaching some eager Alaskans the art of cooking American barbecue, the dream came true.

“I got to cook it under the Northern lights at 1:00 a.m. – amazing, amazing, life-changing experience,” he said with a smile that beamed.

Born in Malaysia, Harry Soo is convinced that his life journey has been the result of coincidental and sometimes accidental circumstances that have combined to create dazzling and fulfilling experiences comparable to the beauty of the Northern lights. He owes many of those unforgettable experiences to his involvement in barbecue, but his route to barbecue greatness was anything but typical or predictable.

In the United States and in a growing number of countries, Soo, pitmaster and head cook for his competition team, Slap Yo’ Daddy BBQ, has become famous for his success as an elite competition barbecue cook with the trophies and super-sized checks that represent more than 100 first-place finishes and 30-plus grand championships. He still touts himself as a weekend cook, but his success has allowed him to divest Slap Yo’ Daddy to include a catering business as well as an online store that sells his spices, rubs and sauces and even a cooking school held in his backyard about 20 times per year. He maintains a blog on his website and is constantly posting videos with tips, tricks and promotions on multiple social media platforms. But unlike many of his competition counterparts, Soo has maintained a day job unrelated to food or barbecue since day one, spending the last 31 years working as an information technology program manager with the Metropolitan Water District of Southern California, a role he committed to long ago and never has taken for granted.

Many successful pitmasters started out cooking barbecue as a hobby and after proving their prowess on the competition circuit boldly took what seemed to be the next logical step. Many quit their day jobs to allow them to dive whole hog into full-time competitive cooking, commercial ingredient and sauce manufacturing, opening restaurants, teaching cooking classes or developing their own line of cooking equipment, gear or cookbooks to sell commercially. Soo took the road less traveled and learned the hard way that a solid career could make his hobby more fulfilling and successful.

Long before he ever thought about cooking his first brisket, Soo’s first real job put him at the controls of a 747 jet as a young man, working as a commercial pilot with Singapore Airlines. It was working as a pilot that ultimately brought Soo from Malaysia to the United States, after being a casualty of airline layoffs. Being let go from what he thought, as a young man, was a stable career was a predicament he never saw coming. That hardship taught him a valuable life lesson that would serve him well.

I took a bite of that brisket and I said, ‘my God, what is this amazing, amazing food that I’m eating?’ I never, ever tasted anything so wonderful, amazing, moist and succulent.  — Harry Soo

“When you’re young, you think you’re superhuman,” he said. “You think that you got a career before you, pursuing your passion of flying airplanes and then you literally get dumped like an old sock on the side of the street. It’s a humbling experience.”

This experience fueled his determination to make a career shift that would ensure job security, but it also meant starting over in many regards. After considering different areas of study that would lead to a job in high demand in the United States, Soo decided on computer science, without knowing exactly what that career entailed.

“I had no idea what that was, but it just sounded like something that I could learn,” he said.

So, Soo came to the United States to study computer science at Texas Tech University in Lubbock.

“That’s how I ended up in America,” he said, “totally by accident.”

It was also somewhat serendipitous that during his first week living in Texas a classmate invited him to go out for Texas barbecue. It was then and there that he was hooked.

“I took a bite of that brisket and I said, ‘my God, what is this amazing, amazing food that I’m eating?’ I never, ever tasted anything so wonderful, amazing, moist and succulent.” 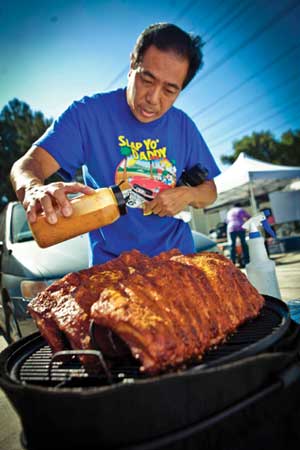 “The most amazing things have happened to me not by choice, but almost by accident,” Soo said.

That week marked the beginning of Soo learning computer science as a new career and cooking barbecue for a new hobby. And as it turned out, he took a basic concept he learned in computer science, an algorithm, and applied it to learning to cook.

“My approach was very simple,” Soo said. “I just took salt and pepper, applied it to a piece of meat and I cooked it and I tasted it and I said, ‘OK, can I make it better?’”

This was the foundation for a spreadsheet that would grow with each ingredient as he added, subtracted and mixed spices.

“I kind of built all these different ideas just like a computer program; that’s what I was trained to do,” Soo said.

He experimented with different formulas, various meats and shared his slow-smoked creations with appreciative friends, neighbors and co-workers for several years.

It was on a dare by a handful of those co-workers that Soo entered his first competition barbecue contest in California, without knowledge of the rules or what was involved. As fate would have it, he won the contest, the first of many more in the years to come.

Soo honed his skills in the next decade-plus by following the guidance of a cookbook written by John Willingham, an iconic championship pitmaster and a hero of Soo’s who he sadly never got to meet before he died in 2013. He did, however, check another bucket list item, when in 2013 Willingham’s family invited him to cook with the team in one of the most prestigious pork cookoffs of the year, the Memphis in May World Championship Barbecue Cooking Contest. With Willingham dying just days before the event, the opportunity to pay homage to him was a great honor for Soo.

He added that this experience epitomized his involvement in the barbecue world.

“My barbecue journey in the past dozen years had been just like that; the most amazing things have happened to me not by choice, but almost by accident.” 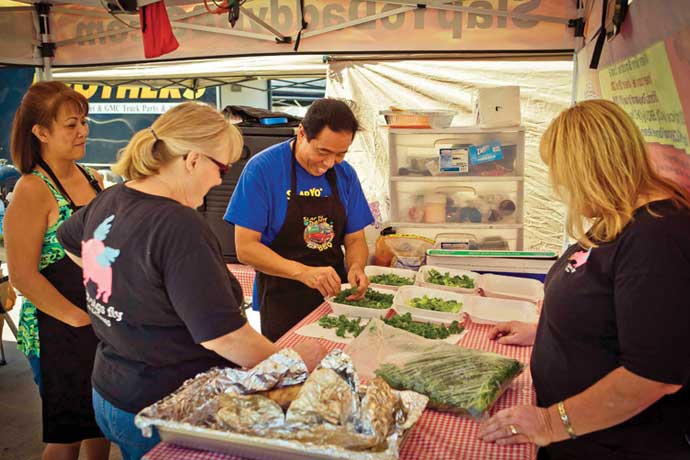 Harry Soo’s Slap Yo’ Daddy BBQ team has finished in first place in over 100 barbecue competitions.

The part of that journey that did the most to put Soo on the map of the barbecue world was an unexpected invitation to appear on a new TV series on TLC in 2009 – “BBQ Pitmasters.” The docu-reality show featured him in barbecue cookoffs across the country alongside some of the biggest names on the competition circuit, including Myron Mixon, Tuffy Stone, Johnny Trigg and Lee Ann Whippen.

“The reason I got on the show was another stroke of luck,” he said.

Producers were looking for an outside-the-box competitor to round out the casting for the show, and a guy who had been winning a lot of contests, named Harry Soo, was recommended by Kansas City Barbeque Society founder, Carolyn Wells. She had met him and was impressed with his success and standout personality. In addition, the fact that he was based in California, was Malaysian, and cooked with a simple pop-up tent and a rudimentary Weber smoker ensured Slap Yo’ Daddy would fulfill the requirement to add an outside-the-box competition team to the TV series.

“I ended up on the show with no audition, no screen test, no nothing,” Soo said. “Just another case of dumb luck.”

In the Season 1 finale, a “rib throwdown” matched seven elite pitmasters against each other with a $3,500 purse. Harry Soo had garnered credibility with his cooking counterparts by that time and he happily won the throwdown and collected the winnings and the notoriety that capped a season-long wave of accolades that he is still riding more than 10 years later.

“On that day, the little engine that could, from California, prevailed,” Soo said.

He added that “BBQ Pitmasters,” which went on to span seven seasons, demonstrated that barbecue is not a one size, color and gender fits all culture, as Soo proved in the very first season. 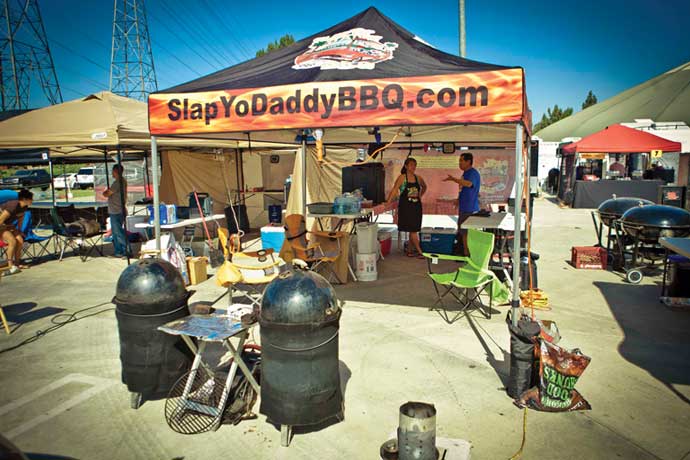 Since growing his following and weekend hobby into somewhat of a barbecue empire, Soo has evolved in his involvement too. He’ll always be a pitmaster, but he’s also philosophic about the significance of barbecue’s culture and he has studied its history, which gave him an appreciation of it. The days of him traveling the country to compete in a contest almost every weekend are behind him as he transitions his efforts to teaching and sharing what he has learned with others, not only about barbecue but about life and the value of achieving goals beyond earning more fame and fortune.

Today, he sees barbecue not as a means to winning another purse or starting a new money-making business venture but more of a privilege to participate and contribute to something that is uniquely American. He said very few culinary trends can trace their roots back to the United States. Barbecue is one.

“We stole the hamburger, we stole the hot dog, we stole pasta from other parts of the world,” Soo said. “But American-style, low-and-slow barbecue is uniquely authentic American and I’m very privileged and honored to be able to cook that.”

Having taught the art of slow cooking and smoking meat around the world, including in New Zealand, Australia, London, Thailand and now, Alaska, Soo has realized the global appeal.

“I’ve seen that fascination with the mystique of American barbecue. Everybody wants to know how to do it, because people who try realize that it’s not easy,” Soo said.

Looking back at the past 15-plus years, one thing has remained constant during Soo’s barbecue journey.

“I have a 50-hour-a-week day job, so my ability and time is limited to nights and weekends,” he said.

From the beginning, he viewed his involvement in barbecue as a way to give back. His philanthropy includes donations from sponsorship support, revenues from sales and classes he teaches, which benefit multiple charities, including a program he started for at-risk youth. He also donates most of what he cooks for online demonstrations to local first responders who look forward to a new episode being posted because it means fresh and delicious meals for the community’s heroes will soon be available.

“I see my role now as more of an ambassador of barbecue,” Soo said.

At this stage of his life, in his 60s, Soo believes in giving away the knowledge and wisdom he has learned up to now. This is why, on his YouTube channel, he demonstrates and posts the exact recipes he has used to win first place in all meat categories.

“I willingly give away all my secrets online. After you hit 60, it’s time to let it all go and let the next generation behind you benefit,” he said.

“That’s what I find priceless about barbecue is the community and friendships that it builds. Because at the end of the day it’s not important how many trophies you won, how many zeros you have in your bank account, it’s basically how many relationships you have built, how much love you have given and received, and how many memories that you have accumulated in your lifetime.”