We use cookies to provide you with a better experience. By continuing to browse the site you are agreeing to our use of cookies in accordance with our Cookie Policy.
Home » Book Review: Camas Davis chronicles her journey into sustainable butchery

Little did Camas Davis know that at the time she lost her job and went to France to do a little studying, exploring and soul searching that she would find her passion and the inspiration for a new career. As a longtime food magazine writer and a person who spent her childhood hunting and fishing, Davis had pondered where food came from more than once. But it wasn’t until she found herself learning butchery from a family of pig farmers and butchers in Gascony, France, that she truly appreciated and connected with the processes that go into getting meat to the center of the plate.

“I wanted an authentic, real experience with food. I wanted to get closer to the processes. I wanted to do them myself and I wanted to find meaning within that,” Davis explains as her reasoning for her quest to learn butchery in France. “On a practical level, I wanted to learn butchery. I chose a subject matter that was highly controversial, highly uncomfortable – something I didn’t know much about even though I was a food writer. I wanted to get into the middle of all of that and figure out what it all meant for me.”

Davis’ newly released memoir, “Killing It: An Education” documents her journey to France to learn butchery as well as the events that led her to establish the Portland Meat Collective, a specialized hands-on meat school in Portland, Oregon, and become the executive director of the Good Meat Project, a group working to “inspire responsible meat production and consumption through experiential education.” The biography chronicles Davis’ passage of self-discovery through honest and genuine prose and striking story telling.

“My initial quest was to learn how to be a butcher. I wanted to learn how does meat become meat – how does an animal get turned into food,” Davis explains. “I knew on a basic level from hunting and fishing and growing up in a semi-farming community – I knew the basics. But I had never been privy to all of the details of all of those processes. I wanted to witness those processes and also take part in them.” 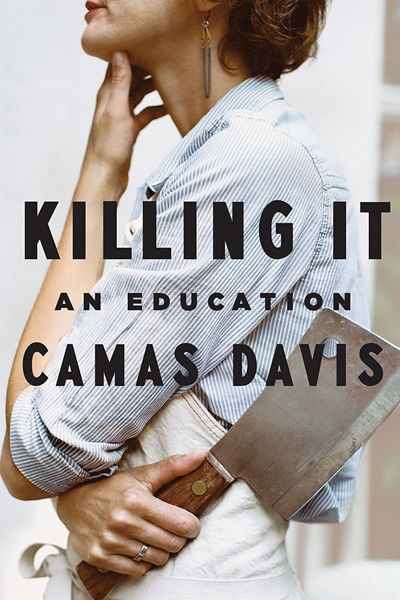 During her 10-year magazine career, Davis moved from New York City back to her home state of Oregon, to work as the food editor and managing editor of a Portland magazine. After finding herself fired from that position she was left at a crossroads. She didn’t want to roll into another magazine writing job to do more of the same, instead she wanted a new challenge. She wanted to learn more about food and particularly, meat. She wanted to learn to become a butcher. Not having any luck being taught by local Portland butchers, she called an old contact from her magazine writing days – Kate Hill, an American cooking teacher and cookbook writer living in France. “Do you know anyone who could teach me to butcher a pig?” she asked her. Hill then invited Davis to join her in Gascony, France. She would help her learn about the French style of raising animals, preparing and eating food by partnering her with a French farming and butchery family she knew. In exchange Davis would help around her house and kitchen during her stay. So, Davis maxed out her credit card, bought a ticket to France and set her new quest in motion.

“This felt like a private moment that I shouldn’t be allowed to witness, these last shudders of life, this battle waged by her [the pig’s] nervous system, but I did not turn away. I was here to learn, after all. I was here to do something hard and real. I wasn’t interested in wasting any more time pretending that what was unfolding in front of me wasn’t really happening. I’d spent the past 10 years of my life doing that, and I was determined never to go down that road again. But words like ‘hard’ and ‘easy’ didn’t seem to apply here. To the people working in this abattoir, to my French mentors raising pigs and butchering them back at the farm, this scene – would they even call it a scene? – was, quite simply, work. Life, death, work. So, I kept watching.”

Further descriptions in the book detail her first experience wielding a knife – including inadvertently hacking into an expensive cut of pork and turning it into chunks of cheap grill meat.

“Eventually, I built up a small mountain of brochette meat on the table and was just about to show Bruno when Marc walked in, looked down at my work, and yelled, ‘Merde!’…I sensed tension, knew it was aimed at me, but had no idea what I’d done wrong, so I continued cutting. Bruno motioned for everyone to be quiet, then moved toward me in slow motion. He put his left hand up gently, to stop what I was doing, placed his other hand over the handle of my knife, and took it away from me as a cop might cautiously take away the gun of a bank robber once she’d surrendered…We stood up together and he moved my right hand toward the pig’s back leg. ‘Jambon,’ he said. ‘Jambon,’ I repeated. ‘Expensive,’ he said… I realized, finally, what I’d done. I’d mistaken the ham for the bottom part of the shoulder and transformed one of their most expensive cuts at the market into cheap skewer meat for the grill.”

While that mistake cost the Chapolards a few Euro in product resale, it was a lesson Davis never had to repeat. As her time and education in France continued, her butchery knowledge grew. However, three months later, as it was time to return to Oregon, she still wouldn’t call herself a butcher. In fact, years after she formed the Portland Meat Collective and started teaching others what she learned in France she still wouldn’t feel comfortable assuming that title.

Deciding what she could do with her new knowledge and skillset was eye opening to Davis after her return to Portland. “At first I thought I could come home and do what my mentors did in France and start a farm and do all the slaughter and butchery myself,” she says. “But I didn’t have three brothers and their wives to get the work done. I realized that dream wasn’t going to happen anytime soon.”

So, what was next? Davis took a job at a restaurant and then at a butcher shop to put some of her new skills to work. But even with the fairly sophisticated “foodie” culture in Portland, she found that her customers were still only buying bacon and pork chops from her at the butcher shop. They seemed to be interested in buying meat that was raised a particular way, but they didn’t have any way to connect with that food. She had been looking for a more transparent meat experience ever since her French adventure and she was convinced she wasn’t the only one on that quest.

Three months after her return from France, Davis formed the Portland Meat Collective in an effort to deliver that sought-after transparency to like-minded Portland consumers. After pooling her resources – finding farmers and chefs and other food experts to help her teach classes – Davis held her first class at her new “transparent, hands-on meat school” in early 2010. Since then the Collective has been teaching a selection of classes about meat cutting, slaughter and preparation all over Portland. The group offers a few classes a month (up to four classes in the summer months). The classes range from the popular pig butchery and sausage and charcuterie making to duck, rabbit, lamb, chicken and turkey butchery. Class participants include everyday consumers interested in experiencing a more hands-on meat experience as well as chefs and farmers who also want to learn more.

“I had originally conceived of the idea just for consumers – but pretty soon it became apparent that they weren’t the only ones interested in this type of class.” Fifty to 60 percent of the attendees are everyday curious consumers. About 25 percent of that group want to get their hands dirty and do all the work themselves, Davis explains, the rest just want to learn about the process. The rest of the people taking the classes are chefs and farmers, many of which don’t get to do whole-animal butchery in their jobs, so they attend to get that opportunity.

In 2014, after the Portland Meat Collective started to get some recognition and attention around the country, Davis started to be approached about starting similar collectives in other cities. Instead of developing a franchise model, Davis raised $30,000 on Kickstarter to set up two test models in Seattle and Olympia, Washington. The remaining money was used to establish the Good Meat Project, which now helps set up experiential, hands-on meat classes around the country.

“We’ve developed a style of education, which is very transparent, very hands-on, very much about every part of the process. That style of education, when more specifically applied to different audiences can affect change in various sectors – consumers and their buying habits, chefs and their cooking habits, how they formulate their menus, who they source their animals from and how much of their animals they’re willing to use,” Davis explains. “Over time we’ve developed a style of education that can be applied all over the country for those audiences.”

As Davis continues to teach classes for the Portland Meat Collective and to help lead the Good Meat Project, now as the executive director of its board, her mission to shift social attitudes about food and to satisfy the consumer’s hunger for a connection with the meat they’re eating is ongoing.

The final chapter of her book reads: “Before I held my first Portland Meat Collective class, Jo had asked me what my long-term goals for the project were. I told her that I hoped someday the Portland Meat Collective wouldn’t even have to exist, because everyone would already possess the knowledge that our classes offered. ‘That’s a long game you’re playing,’ she said. It was indeed. It still is…It has been nine years since I first went to France to learn how to turn a pig into pork chops and a pig head into pâté. My classes still sell out. I have competitors now, other people who see the need for such education, which means that the long game hasn’t gotten any shorter.”