We use cookies to provide you with a better experience. By continuing to browse the site you are agreeing to our use of cookies in accordance with our Cookie Policy.
Home » Views from the summit

Views from the summit

Consumers and the courts were key topics discussed during the 2022 Stakeholders Summit in Kansas City, Mo. Organized by the Animal Agriculture Alliance, the event was an opportunity bring together constituents of the farm and food communities to gain insights on how to seize opportunities in the face of challenges such as keeping meat relevant to consumers transformed by the COVID-19 pandemic and animal welfare activists adjusting strategies to pass ever-tighter restrictions on animal agriculture.

So how do stakeholders in the meat production chain decipher the consumer behavior of today and what information do consumers search for to inform their purchasing decisions? Danette Amstein, managing principal at Midan Marketing, started with the hard economics of buying meat in a time of the highest rates of inflation since the 1970s.

“We have a lot of concerns that we need to be attentive to as we move forward,” Amstein said. “What this translates to is about a third of consumers saying, ‘I’m purchasing less meat’; and when we asked them why they did that in the last month, 78% say ‘I can’t afford it; I’m just priced out of it right now.’”

Industry can help consumers weather these difficult times by providing stability in what’s going into grocery store meat cases and explaining the value of the product even though it costs more. Stability can come in other forms and actions, such as relating to consumers’ values, Amstein said.

One positive outcome to out of the pandemic so far is that consumers made more meals at home, Amstein said, and gained confidence and enjoyment from cooking. Market research firm IRI estimates that 80% of meals are still being cooked at home. Pre-pandemic, that number was 50%.

“So, as inflation has impacted our product and what consumers are paying for it, if we can inspire them; if we can educate them on how to stretch that meal; if we can keep their confidence up in providing a meal to their family and giving them the opportunity to understand that there’s value in our product even though it’s more expensive, then we will continue to win at the meat case and with consumers,” Amstein said.

But what the industry doesn’t want is consumers “trading out” of the category.

Much has been written about the meteoric rise (and head-scratching drop) of plant-based protein alternatives in the market. A survey conducted by Co.next found that less than 20% of consumers have any real concern about what plant-based proteins are compared to 40.2% of consumers surveyed in 2019. Maeve Webster, president, Menu Matters, attributed the category’s success to the major players’ focus on foodservice.

“These brands, particularly Impossible followed by Beyond, were very smart to focus on getting these products into restaurants first,” Webster said, “because if brands that consumers trust, like McDonald’s and Burger King and a host of other restaurants, essentially put their stamp on it and say ‘we feel confident enough to put this on the menu’, then consumers will think ‘this can’t possibly hurt me, so I’m willing to try it.’ That helped in really changing the concerns around these new… processed alternatives that are emerging now.”

Although plant-based proteins aren’t “as scary anymore” to consumers, Webster noted mounting concerns about what these products are and what will they mean to consumers’ wellbeing in the long term.

Consumers are voicing concerns about long-term health, that the alternatives won’t be as healthy as meat, and concerns that food and beverages will become completely processed.

“Some of these products have been called out by regulators for having ingredients that we weren’t really sure what was in there and were they safe.”

Consumers are looking for a balance, and one way industry can help them find it is through blended products.

“You’re not at war with plant-based; consumers are not going to give up your products,” Webster said. “It’s about trying to find a balance; it’s trying to find an alliance with plants. How can both work together in order to create an even stronger solution consumers will get behind and really understand and embrace?” 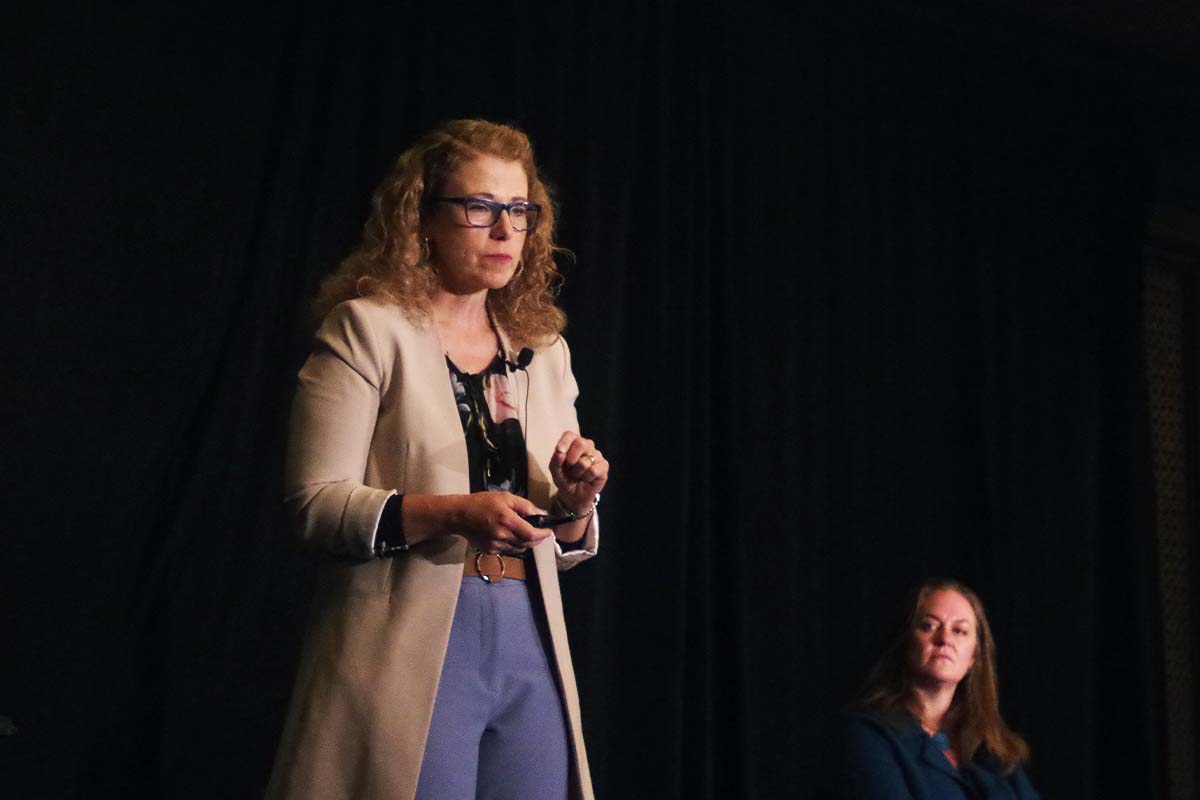 Animal proteins aren’t going away, and consumers want to feel good about what they’re buying. But consumers’ desire to do the right thing by themselves and the planet has made industry vulnerable to significant and costly regulations. John Dillard, principal, OFW Law and Brianna Schroeder, partner, Jantzen Schroeder Agricultural Law, provided a picture of the legal landscape in agriculture.

An important development in the legal saga surrounding California’s Proposition 12 animal confinement law is the US Supreme Court’s decision to hear oral arguments in the case. Proposition 12, or Prop 12, sets minimum space requirements for veal calves, laying hens and sows and prohibits the sale of pork, eggs and veal sourced from animals confined in spaces that do not comply with Prop. 12 standards regardless of their origin. The high court is taking the case on appeal from the US Court of Appeals for the 9th Circuit, which in July 2021 upheld a lower court ruling against a lawsuit filed by the National Pork Producers Council (NPPC) and the American Farm Bureau Federation (AFBF).

In June, the North American Meat Institute (NAMI) filed an amicus brief with the high court arguing, in part, that the “…Constitution denies California the authority to dictate the conditions under which farm animals must be housed outside California’s borders. Nor may California erect trade barriers whose purpose and effect are to regulate commerce outside the State.”

Dillard summarized the opposing arguments – that the effects of Prop 12 are largely going to extend outside of California, and producers and consumers are going to be burdened by it – consumers in other states will pay higher prices for pork because of California’s law. However, California is arguing that pork produced in the state and elsewhere is being treated the same and the indirect impacts are permissible under current law.

Dillard said the high court is being asked to determine if the burden on out-of-state pork producers is excessive in relation to the local interest the state of California is claiming.

“In terms of local interests that have been accepted as valid local interests [includes] health or safety, environmental protection is another item and consumer protection,” Dillard said. “Oftentimes, courts are reluctant to wade in if there is some type of stated local interest deemed legitimate.”

What the Prop 12 case demonstrates is how state laws governing sales, inspection requirements, labeling and processing can have national impact.

Schroeder gave as examples Colorado Initiative 16, a proposed law that would amend the state’s animal cruelty laws to criminalize breeding practices used in agriculture. Initiative 16 established a lifespan of an animal and mandated the animal couldn’t be slaughtered until it had lived 25% of that lifespan. This meant, for example, that cattle couldn’t be slaughtered until age 5 or 6.

“It would have ended animal agriculture, hunting, fishing, rodeos, dog shows, all of those things,” Schroeder said. The Colorado Supreme Court struck down Initiative 16 as too broad.

Animal agriculture has been challenged in states considered friendly to the industry. Iowa House File 2305 prohibited construction of new concentrated animal feeding operations (CAFOs) in addition to expansion of existing CAFOs and would have made integrators joint owners of CAFOs. That proposed legislation died in committee.