We use cookies to provide you with a better experience. By continuing to browse the site you are agreeing to our use of cookies in accordance with our Cookie Policy.
Home » New facility, same mission at Porter Road

Chris Carter, chief executive officer and co-founder, and James Peisker, co-founder, started Porter Road Butcher Shop in Nashville, Tenn., in 2011. Both with culinary backgrounds working to open their own restaurant, they struggled to find a steady supply of meat that met the standards they were looking for, which included pasture raised, no antibiotics and no hormones.

“There were plenty of farmers that were making the effort to raise animals the right way, but then just feeding into the commodity system for the most part,” Carter said.

Carter and Peisker used the shop to provide farmers raising animals to certain standards an outlet outside the commodity markets, as well as give their community and the Nashville area access to that high-quality meat. The business grew for five years, and in 2015, Carter and Peisker decided they wanted more control over the entire process of working directly with the farmers and getting the animals from farm to the shop and ready for sale.

“We went out and purchased our own harvesting house in Western Kentucky, giving us the ability to be fully transparent, look our customers in the eyes and tell them exactly every minute of that process,” Carter said.

In 2017, Porter Road began selling to the restaurant and foodservice industry through a wholesale business. The following year, after raising some venture capital, Porter Road Butcher Shop began to offer its products to anyone in the country through porterroad.com.

“Our mission stays the same today,” Carter said. “We want to continue to grow and be able to bring more farmers into our system, paying them a higher than market wage for the livestock that they’re raising, treat the animals as good as we possibly can, and then dry age and butcher with a skill that brings a whole different level to the meat industry that’s been missing for quite some time.”

In July of this year, Porter Road moved to a new slaughtering facility just a mile-and-a-half down the road from its original plant. The Princeton, Ky., processing plant quadrupled Porter Road’s plant area to 28,000 square feet and includes expanded packaging space, shipping area, refrigeration and a larger cutting room.

Originally the facility was two separate buildings, one a former bowling alley and the other an old grocery store. In the 1980s the two were joined together and turned into a sock factory. Porter Road processes in what it calls the south building and the north building houses shipping, storage and refrigeration. But in the beginning, Carter and Peisker were trying to address a different issue.

At the beginning of the COVID-19 closings, cardboard recycling at Porter Road had stopped. It piled up at the facility and because there was no way to recycle, the company had to pay the city dump for disposal. Carter sat down with a city planner and the mayor to talk about the ways Porter Road had benefitted the community and the ways it planned to do so in the future, including expansion.

“The conversation started with cardboard recycling and then ended up getting into the industrial development authority purchasing the building on our behalf, through the city,” Carter said. “We in turn purchased the building from the city for $150. So, it was a little bit of timing, a lot of luck and just constantly knowing that we wanted to move, and we needed to move into a larger facility. Luckily for us, we were just in a community that supported us greatly.”

Porter Road took the new building and built what Carter called a “box in box” scenario. They completely gutted the building, trenched out the center and installed the necessary drains, built new walls inside the structure, added refrigeration and French drains and resealed the floors.

“The place looks like a surgical room it’s so clean,” Carter said. 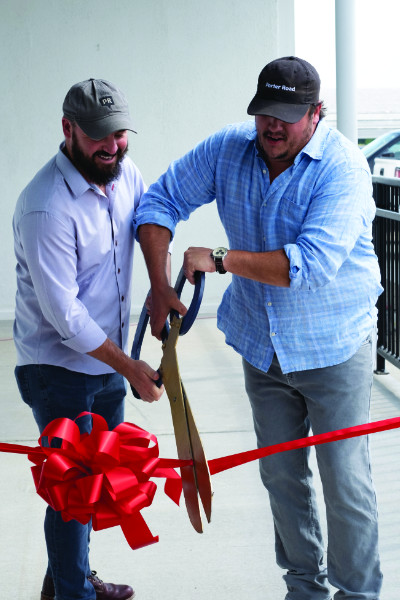 James Peisker (left) and Chris Carter, co-owners of Porter Road, cut the ribbon on the new Princeton, Ky., processing facility.  New technology includes a 34-foot rollstock former and a 12-foot rollstock former. The 12-foot unit is primarily used for grind and sausage while the larger unit runs almost non-stop with whole muscle cuts. When it comes to processes, Porter Road has remained flexible since the beginning.

In the new facility, employees break down carcasses with band saws rather than handsaws as they did in the past. The company also installed a conveyor for cutting, something it hadn’t used in the past.

“We also took a lot of the hardships that our crew has been dealing with,” Carter said. “Where we have one butcher who is 6’5” and another who is 5’6” and they shouldn’t be working on the same table at the same height, so all of our tables are adjustable to each one of those particular butchers’ needs.”

The new facility has also given Porter Road the chance to streamline and automate many tasks outside of the harvest and skilled butchering, things like building shipping boxes and taping them.

At present, Porter Road’s overall business consists of three outlets for product, the Nashville retail store, foodservice wholesale and online consumer sales shipped via FedEx. The online sales make up about 80% of total business, wholesale provides 12%, and the remaining 8% of total sales goes through the retail shop.

“COVID really put a big focus on our direct-to-consumer business, it’s something that we were working towards and putting most of our efforts towards, it’s the growth engine of the business,” Carter said. “And it’s the way we plan to continue to grow the business. We will have other opportunities and other channels as we continue to scale.”

Porter Road’s ultimate goal remains to change the industry by providing customers and consumers with meat from humanely 100% pasture raised animals containing no antibiotics and no hormones, but there’s more to it than that. Carter and Peisker want the farmers who raise those animals compensated for their efforts and paid more for the extra time and money that goes into raising them.

Another piece to the mission involves not transporting animals across the country to centralized feeding and slaughter operations. Animals will stay healthier and happier being transported much shorter distances, but this takes a lot of planning and communication with their partner farmers.

“The farmers are putting in an equal amount of investment into their property, their land, their teams, purchasing livestock when necessary, ramping up and growing,” Carter said. “It takes a lot of time to do correctly and that’s one of the biggest things for us is we don’t want to lose focus on that mission as we continue to grow.”

The new facility is another step toward what Carter and Peisker call the Porter Road “playbook,” local farms raising animals to the necessary standard, processing facility and retail and or shipping capabilities, all in close proximity. This is the model they’d like to place in different areas throughout the country.

“Currently our animals do not travel more than 45 minutes to an hour,” Carter said. “Is that going to be the way forever? I don’t know. But to grow those farms and be able to find the right farmers, and this has never been discussed either so this is shooting from the hip, I would say maybe 100 miles or something like that would be a fair radius for one facility.”

Building more facilities to operate with local farmers not only eliminates long animal transport, and rewards local farmers for raising their animals right, it also builds communities and provides jobs.

“There are a lot of things outside of just raising animals correctly that we are trying to accomplish with this process,” Carter said.