While public health strategies to support better-for-you eating through the Dietary Guidelines and the National School Lunch Program had been put on the back burner during the Trump administration, the food industry can expect that as soon as possible, President-elect Joe Biden’s team will make it a priority. This includes, once again, putting sodium reduction in the spotlight, especially on school meals.

At press time, the Trump administration was trying to reduce nutrition requirements for school meals, seeking to undo changes initiated by the Obama administration a decade ago. The US Department of Agriculture stated that it wants to allow school districts to be more “flexible” with rules, including previously mandated reductions in sodium levels. The plan is to simply do away with sodium-reduction targets for 2021.

Even if successful, schools will still need to follow the Dietary Guidelines for Americans, which currently advise that it is best to consume less than 2,300 milligrams per day of sodium. While the 2020 Dietary Guidelines Advisory Committee (DGAC) did not issue specific recommendations on sodium intake for the soon-to-be issued 2020-2025 Dietary Guidelines, the DGAC noted sodium is overconsumed, except by infants, with the average American consuming 3,393 milligrams of sodium per day. The new Guidelines are expected to maintain the current limit, which was also the sodium advice in a 2019 report from the National Academies of Science, Engineering and Medicine.

Excessive consumption of sodium is shown to raise blood pressure, a condition known as hypertension and a leading contributor to cardiovascular disease and strokes. Processed foods, particularly prepared meat and poultry products, are known to be concentrated sources of sodium. 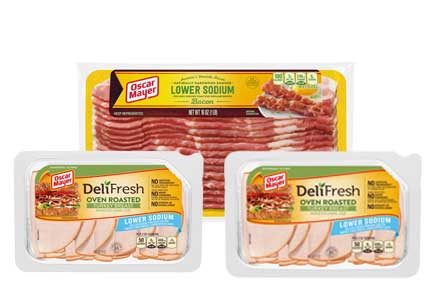 In efforts to reduce total sodium content of meat and poultry, processors often adjust multiple ingredients in a formula, as sodium may be found in batters, binders, breadings, brines, curing agents, emulsifiers, marinades and more. These ingredients provide functionality to meat systems, so reduction or replacement may impact more than just taste.

Regardless of the application, the primary source of sodium is sodium chloride, or simply salt. Sodium is also a component of other key ingredients used in meat and poultry, such as sodium nitrite and sodium nitrate (curing agents), sodium bicarbonate (chemical leavener in breadings) and sodium lactate (antimicrobial).

To reduce sodium content, sometimes a formulator may simply cut back on the sodium-containing ingredient. Other times they may swap the sodium salt with a potassium salt. The reformulated product may require the addition of a flavor potentiator to deliver on taste, or the addition of food safety ingredients to maintain shelf life. Salt is a multi-functional ingredient, and all those functions must be addressed when reducing sodium content.

Tate & Lyle, Hoffman Estates, Ill., offers a sodium-reduction technology that consists of tiny hollow microspheres of salt. The hollow microsphere structure of the salt crystals maximizes the contact surface area relative to the weight, allowing for a much better distribution of sodium throughout the food product. This makes it possible to deliver the same product attributes such as salty taste, texture and other functionalities with lower levels of sodium. The hollow microspheres, which are labeled as salt or sea salt, work well in breadings and low-moisture meats.

“Through extensive research, we’ve discovered that one of the best sodium-reduction solutions is potassium chloride. In meat applications, it effectively upholds flavor and functionality, while enabling significant reduction in sodium,” Johnson said. “Our proprietary research finds it is also well received by consumers, especially when paired with sea salt.”

Up until Dec. 17, 2020, potassium chloride had to be labeled on ingredient statements. In response to an industry petition for a more consumer-friendly alternative name, the US Food and Drug Administration now allows the ingredient to be declared as potassium salt. 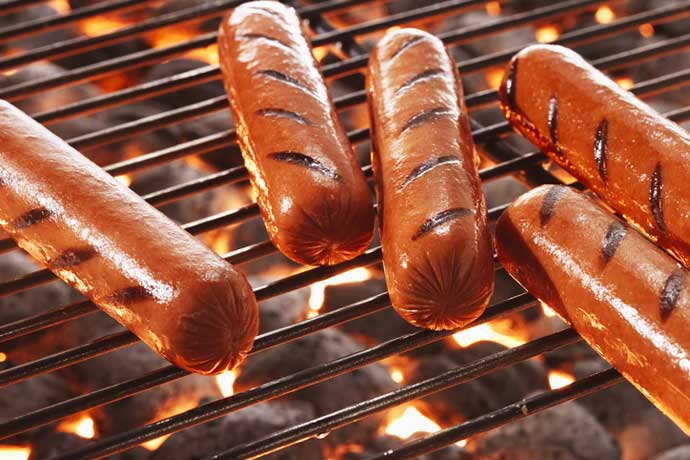 Wixon, St. Francis, Wis., created a reduced-sodium system specifically designed for the meat and poultry industry that functions as both a sodium replacer and flavor modifier. This system can be customized to any meat species or application where sodium currently provides both flavor and functionality. The system is labeled as “potassium chloride, natural flavor.”

“This reduced-sodium system positively impacts flavor naturally without compromising functionality and can support up to a 50% reduction in sodium,” said Ron Ratz, senior vice president of Wixon. “It is used in exactly the same manner as standard salt.”

Hoffman Estates, Ill.-based Sensient Flavors, markets a range of natural flavors to assist with sodium reduction. One product line boosts savory notes, including saltiness perception. It is often used in blended products and meat alternatives to provide juiciness and mouthfeel.

“We also have a flavor system that can offer up to 40% sodium reduction depending on application,” said Roger Lane, senior marketing manager of Sensient. “It comes in dry and liquid formats for ease of use.”

A range of other food ingredients may assist with sodium reduction. Some are specific to application, while others may be used in all types of products.

Yeast extracts, for example, are recognized for their ability to provide umami flavor. Some yeast-based taste enhancers provide an additional dimension of flavor through the contribution of roasted flavor notes.

Yeast extracts are used in a similar way as sodium chloride and are declared on ingredient decks simply as yeast extract. They do not produce any of the bitterness or chemical notes that can sometimes be a byproduct of the sodium reduction process.

“We harness the power of plants to provide a natural and clean-label sodium reduction ingredient,” said David Hart, business unit director, Salt of the Earth, Israel. “Plant extracts and concentrates that are rich in umami flavor compounds are used to create an ingredient that can reduce sodium by up to 45% across a wide variety of products. In addition to sodium reduction, our ingredient can be used for flavor enhancement, especially when looking for a natural and clean-label alternative to monosodium glutamate and yeast extracts.” 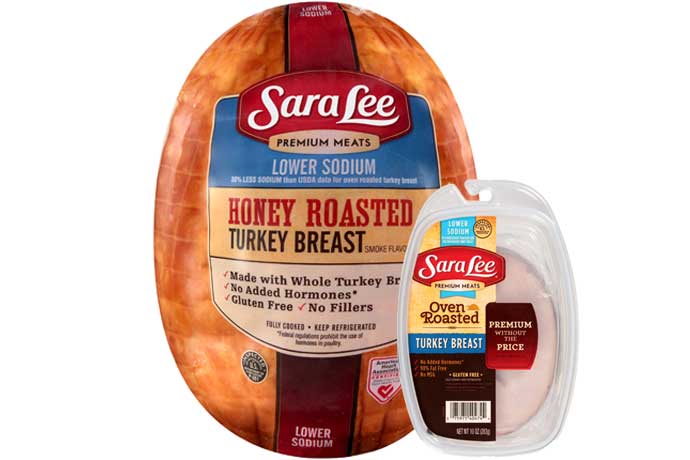 The liquid ingredient is labeled as “natural flavor, water, sea salt.” A usage level between 0.3% and 0.8% of the formula may reduce total sodium by as much as 35%.

“In meat systems, permeate can be used to reduce the amount of sodium, enhance browning, protect color, mask bitter flavors and improve structure formation,” said Susan Larson, associate researcher, University of Wisconsin-Madison, for the US Dairy Export Council, Arlington, Va. “The lactose in permeate also provides a carbohydrate that could replace a portion of the sugar in a fermented sausage.”

Permeate is most widely utilized in the dried form, which requires no special handling from distribution through storage. The dried powder flows readily and is easy to mix in with the other ingredients in the formulation.

“Permeate also readily dissolves in water,” Larson said. “Permeate can be added to meat and poultry formulas the same way salt is currently used. It can be blended with other ingredients, mixed with water or broth for use in a brine, or added directly to a blender. It is a natural and label-friendly milk-based ingredient with a mild flavor that will not overpower other flavors in meat products.”

“We offer a propionic acid-based antimicrobial solution that has been shown to extend product shelf life more consistently in comparison to traditional lactate-based products and can therefore be used as an alternative to sodium lactate and diacetate-based solutions,” said Courtney Schwartz, marketing director. “Because it is used at 10-times less the application rate, it can reduce sodium content dramatically. There’s also an option buffered with potassium, therefore contributing zero sodium to the overall formulation.”

Corbion, Lenexa, Kan., offers potassium lactate, the potassium salt of natural lactic acid. It is produced by fermentation of sugar and has good antimicrobial properties.

“It is an example of an ingredient solution where we offer 99% less sodium than the alternative,” said Rob Ames, senior business development manager. “Something we’re particularly proud of is that our research and development team is able to minimize flavor impacts from the sodium removal. In certain ferments the ingredient actually provides a functional and flavor offset to salt.”

Deli meats and the growing range of meat snacks often rely on buffered vinegar as a clean-label alternative to traditional preservatives for inhibiting mold growth and maintaining freshness.

“Acetic acid is the key active ingredient in buffered vinegar,” Schwartz said. “It is available bound to either sodium or potassium.”

Ames added, “Where sodium-buffered vinegars can add upwards of 240 milligrams of sodium per serving, our potassium-buffered ingredient contributes less than 2 milligrams and still has a great taste.

“Meat snacks is a category where consumers really appreciate a salt flavor and that manufacturers need the yield and shelf life from the salt. Our ingredient covers all the needs because the ferment is a real workhorse in binding water.”

Johnson concluded, “It’s worth noting that the majority of Americans do not consume enough potassium. By using potassium-based ingredients as part of a sodium-reduction solution, processors help consumers decrease sodium intake and increase potassium intake.”