Bacon at the head of the class

This work the two meat scientists are doing is part of a study using commercially processed bacon that is being carried out at the University of Illinois. This research into bacon and how it can be improved for foodservice and retail sales, is being carried out by these two academic researchers.

“I’m about two or three years out from my PhD,” Harsh said.

They both teach and do research. People are surprised, though, when they find out a lot of Dilger and Harsh’s research centers on bacon.

“Yes, it is a little surprising to people,” they said, laughing.

Their research focuses on several areas when it comes to bacon, including pork bellies, animal feed for pigs and genetic lines for pig breeding. These three factors, they believe, lead to healthy animals that produce good pork, especially bacon. The research they carry out helps the large commercial processing industry that makes bacon on a big scale, as well as small meat processors, who produce bacon on a more local level.

“So, we work with big bacon producers. But we also are involved in Extension when we can be, and we work with the Illinois Association of Meat Processors (the state meat processors’ trade association), Illinois pork producers and beef producers,” Harsh said. 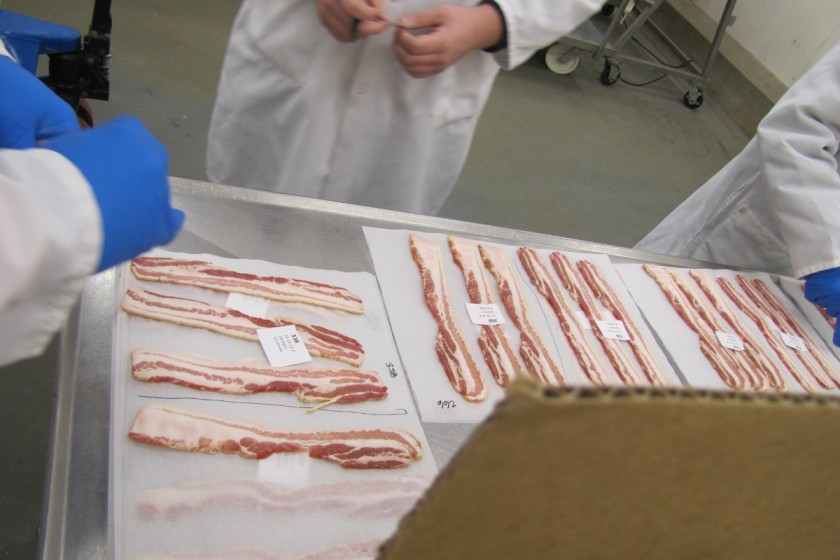 Rather than focusing on pig breeds, they concentrate on genetic lines, sow and sire lines, which play more of a role in the large pork industry, including improving the manufacturing of bacon by big processors. Individual breeds are a more important factor for small processor bacon production. They also work with genetic companies.

“We’re one of the places that is important to the pork and bacon industry, both large and small, because we can measure the quality of meat in pigs,” Dilger said. A major part of the research they do centers on pork bellies, because the bellies are where much pork bacon comes from, although not all.

“Cottage bacon comes from the shoulder and there is back bacon,” Dilger said. “They are very lean bacons, where bacon from the belly is much fattier.”

One area of research Harsh and Dilger carry out consists of measuring pig bellies, and whether the belly “flops” or not.

“We’ll take a belly and flop it over a bar. You want it to be flat. If it flops too easily, if it slices very thin, that makes it harder to slice. That is not good,” Dilger said.

“We learn a lot from consumers, who say they want lean bacon, but the truth is, fat content makes the taste,” Harsh explained.

According to Harsh, fat content in a belly is very important, and crispy fat gives good bacon its “bacon” taste.

“In general, you need pigs to be fat, if you’re going to have good bacon. The animals need to grow fast, they need to be fat and you need good meat quality at the end. So, you have to do all these things.”

A major part of Dilger and Harsh’s research focuses on bellies, because so much of bacon quality focuses on the bellies bacon is made from.

Dilger says their research also focuses on the things that are happening in the lives of the animals, how the pigs live. “If their lives are good, then the quality of the bacon is greatly improved.”

The diet of pigs is an extremely important part of good bacon production. An urban legend from long ago describes how pigs in Northern New Jersey, not far from New York City, were fed garbage.

“Fifteen or 20 years ago, ethanol byproducts were fed to pigs. Today, pigs are fed very well, that can include vegetarian diets. Over the last 10 years, the diet of pigs has improved greatly, and it has improved bacon quality, as well,” Harsh said.

Since the University of Illinois is a land grant university, Harsh and Dilger have an operating small meat plant as part of their meat laboratory. The plant, under USDA inspection, has two purposes. It is the site of some, but not all, of the research the two meat scientists conduct. Other research is done at meat plants and at nutrition companies.

The other purpose is to train University of Illinois Animal Science students. The students staff the plant and do much of the work there, with the assistance of a meat judge and coach, and the meat lab manager. The plant has been operated for decades, and the meat is sold to the public.

“People who live around the Urbana/Champaign area love having our meat plant here,” Harsh said.