We use cookies to provide you with a better experience. By continuing to browse the site you are agreeing to our use of cookies in accordance with our Cookie Policy.
Home » Creating a chorus

Just as a great chorus blends together a group of voices to produce a brilliant, melodic sound, great salumi blends quality meats and specialty ingredients to create a flavorful, satisfying product. With that end goal in mind, Martinique Grigg and Clara Veniard took the long-time Seattle iconic brand Salumi and redeveloped it into the new charcuterie brand, Coro. With a deli still operating in downtown Seattle, and a new charcuterie production facility operating a few miles away in Kent, Wash., Salumi Artisan Cured Meats LLC (doing business now as Coro Foods) is offering customers a “chorus” of charcuterie flavors mixing Old World techniques with modern seasonings and flavor combinations.

“We chose to rename the brand Coro, because it’s the Italian word for chorus,” Grigg said. “It really reflects our mission and what we’re trying to do with our products. It’s not just the chorus of unique flavors that we offer, that are really different from other salamis out there, but also it’s this idea of a chorus of people, contributing to this art form, over time.”

Many meat-eating residents of Seattle are probably already familiar with the Salumi name – it’s been a Seattle institution for more than 20 years. The cured meat producer and deli sandwich shop was opened in the Pioneer Square neighborhood by Armandino Batali (father of renowned chef, Mario Batali) following his retirement from Boeing. With diners often lined up down the street, the sandwich shop created a loyal following of customers anxious to take home one of its signature meatball, porchetta or salami sandwiches – all made in-house with charcuterie handmade in the back of the shop since the day the deli opened its doors.

After building the business and its well-known reputation in and beyond Seattle, Armandino passed the reins to his daughter Gina and her husband, Brian D’Amato. The two, still under Armandino’s watchful eye, continued with the philosophy that great salumi – like the flavors it features – needs to develop and evolve over time.

“There are some salami and salumi producers that are really into following that Old World tradition, but the Batalis have always had the philosophy that salumi is actually an evolving tradition,” Grigg said. “Part of the fun is actually seeing how you can evolve flavors to follow what the modern palate wants.”

It was this philosophy, combined with their love of food and an entrepreneurial spirit, that brought Grigg and Veniard to the Batalis doorstep in search of a new business venture. 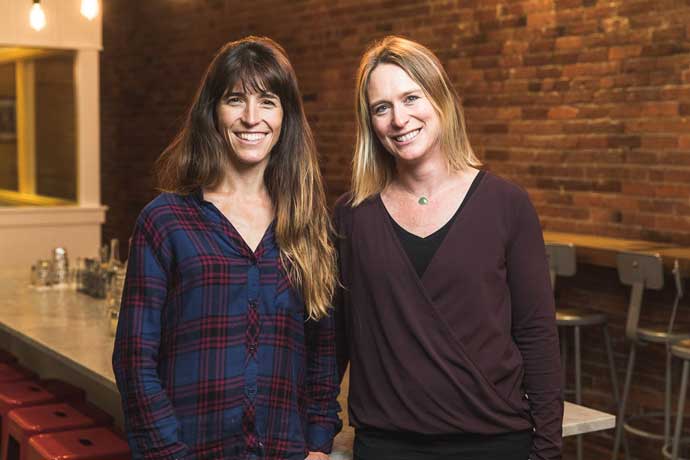 Veniard’s family was in the food business, as the owner of a large confection company. Earlier in her career, she apprenticed with James Beard Award winner Joan Nathan and worked in fine dining. Her other passions included international affairs and business, which led her to time served in the Peace Corps, work in international finance at The Gates Foundation and four years working for Amazon.

Grigg was chief executive officer of the non-profit outdoor organization, The Mountaineers.

Although the two both attended Dartmouth College at the same time, they never met until a ski trip years later. A friendship and business partnership developed soon after. They formed Grant Peak Capital in April 2016 and started looking for Seattle businesses to invest in.

“We were looking in the area and were introduced to the Batalis. Gina was looking to retire, so it was the perfect opportunity for us,” Grigg said.

In October 2017, the duo started immersing themselves in the world of charcuterie – learning all they could about the craft and the business from the Batalis.

“We spent almost two years just learning everything about the business. We learned all about salumi making,” Grigg said. “It was wonderful getting to learn from them – to really learn the craft. And then, they handed the reins over to us completely.”

Veniard and Grigg have been running the company for almost two years.

“When Clara and I started, we knew very little about salami making, but now four years in, we might be in the top 0.5% of people in our knowledge of salumi and charcuterie,” Grigg added.

One of the first changes Grigg and Veniard brought to the company after taking over in 2017, was relocating the deli to a new location around the corner in December 2018. Then, the year following, they opened a new production facility in Kent, Wash., about 20 miles away. Originally, production of the charcuterie was done in the back room of the small deli shop in approximately 2,000 square feet of space. With the new facility, there is now five times more space for production. 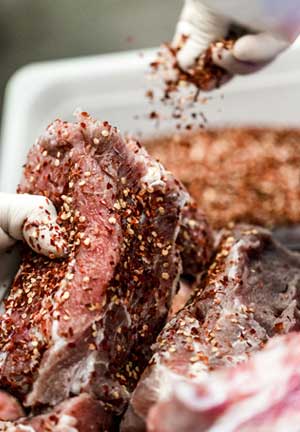 However, even with the growth, the company is still focused on small-batch production.

“What’s been so exciting about our new production plant is how we’ve been able to create a facility that ensures consistency and allows us to make the highest quality salami that you can get,” Veniard said. “And at the same time, we’re maintaining our small-batch production process. It’s still a very handcrafted process.”

The new facility features new aging and curing rooms to mimic those found in Europe.

“These are state-of-the-art rooms with huge pieces of equipment that they use in Europe to cure salami and other meats,” Veniard said. “The equipment helps ensure vigorous airflow. It ensures the temperature is maintained, that humidity is maintained. It gives us more consistent high-quality product.”

In addition, a few months ago, the company achieved an excellent rating in its SQF certification from the Safe Quality Food Institute.

Coro employs 22 people – three at the Salumi deli and the rest in the production facility. The plant is open from 7 a.m. to 3 p.m., five days a week, but only produces product two days a week. The other days are devoted to cleaning, packaging, shipping and R&D.

“Part of the challenge with our new facility was figuring out how to incorporate our proprietary process and preserve our artisan small-batch process at the same time,” Veniard said. “We use a slow-aging and fermenting technique, which is why we don’t make product every day.”

After pork is cut in the first step of the production process, it is ground and mixed with spices. Then it is put into casings and placed in a fermenting chamber. Depending on the product, it could remain in the chamber for 24 to 48 hours. After that, it’s moved to the aging room. Some of the company’s whole-muscle products like coppa, culatello, guanciale and pancetta age from two to nine months.

“We’re one of the few companies in the nation that make a culatello, which is like the heart of the prosciutto that gets aged for almost eight to nine months,” Grigg said.

The production facility wasn’t the only thing that got a makeover when Grigg and Veniard took over – the name, branding and packaging was revamped as well. The deli still operates under the name the people of Seattle are familiar with – Salumi. But, as the company added more retail and wholesale products, the new owners decided to choose a name that would highlight their ongoing mission – Coro.

The company explains its decision on the company website: “As members of a broader community of cured meat artisans, we cannot presume to own the word Salumi, which is the Italian word for cured meats. We are one of many around the world that make salumi and dedicate ourselves to this craft. Not only should others be able to share in the celebrated word, we also believe it should be easy for our customers to find the product they love. Why Coro? The Italian word for chorus, it is a celebration of the chorus of unique and non-traditional flavors we create in our cured meats and the chorus of voices at Salumi that come together to make it loved.”

Music not only inspired the company’s new brand name, but its packaging as well. Each salami is wrapped in brightly colored paper designed to resemble jazz albums from the ‘50s.

“Jazz is the inspiration for our packaging because I like to say we’re kind of like the jazz of cured meats. Jazz was influenced by music in Europe, but it was also influenced by all these new world musical traditions. Jazz became so transformational that it ultimately transformed music back in Europe as well,” Veniard said. “We’re kind of like that for cured meats. We were inspired by European cured meats, but we’re also influenced by all of the wonderful culinary traditions that we have in the US. Ultimately, we hope to take cured meats to the next level and, like jazz, maybe transform cured meats in Europe as well. We wanted the name of the brand and our packaging to reflect that.”

Salami varieties are sold in 5-oz piccolos and 2-lb deli sticks. In addition to selling the products online, at corofoods.com, the salamis are available at various retail locations around the country including Eataly retail locations nationwide and soon in William Sonoma and Whole Foods.

“And many people like to gift our salami, because it’s so unique,” Veniard said.

The flavor combinations are what makes Coro salamis “unique.” The Classic variety adds its own spin with garlic and a hint of ginger. Agrumi salami is made with cardamom, orange peel and red chili flakes. Finocchiona uses traditional black pepper and fennel, with a touch of curry. And one of the brands most popular varieties – Molé – is inspired by the cocoa, cinnamon and chipotle flavors of Mexico.

In addition, a new Thai-inspired lemongrass salami will be offered this fall, as well as a winter peppercorn variety later in the year. Coro plans to rotate in unique seasonal flavors throughout the year.

“For now, our plans are to continue growing our brand and our production,” Veniard said. “We’ll definitely continue doing seasonal flavors and bringing out new flavors – that’s at the core of what we do and what we’re known for.”