We use cookies to provide you with a better experience. By continuing to browse the site you are agreeing to our use of cookies in accordance with our Cookie Policy.
Home » Processor Profile: HeartBrand Beef still beating

The coronavirus (COVID-19) pandemic has left no corner of the US food industry untouched. Jordan Beeman, president of Flatonia, Texas-based HeartBrand Beef, said trying to sell high-end specialty Akaushi beef during the pandemic presents challenges not faced by most commodity-based processors. He said the ride his business has taken the past few months is “like living on a wave” with plenty of ups and downs – and opportunities to sell more beef.

HeartBrand Beef is led by Bill Fielding, chief executive officer of HeartBrand. Fielding is a veteran of the meat and food industry. He spent years working for some high-profile companies including 27 spent working for Cargill. That was in 2016 and Fielding already had spent seven years developing a niche beef product sourced from Akaushi cattle.

American Akaushi cattle are direct descendants of the Mount Aso region’s revered Akaushi herds in Japan with a lineage that can be traced back more than 30 generations to the origins of the breed. The US herd is the largest purebred group of Wagyu-type cattle outside of Japan.

HeartBrand Beef is the exclusive breeder and processor of Akaushi beef in the United States. Akaushi (which means “red cow” in Japanese) cattle raised by HeartBrand graze on a special mix of grasses in the open air and later move on to a grain formula. This combination results in highly marbled beef but with a fatty acid composition that has a positive ratio of monounsaturated to saturated fat and is a significant source of oleic acid, the same monounsaturated fat in olive oil. 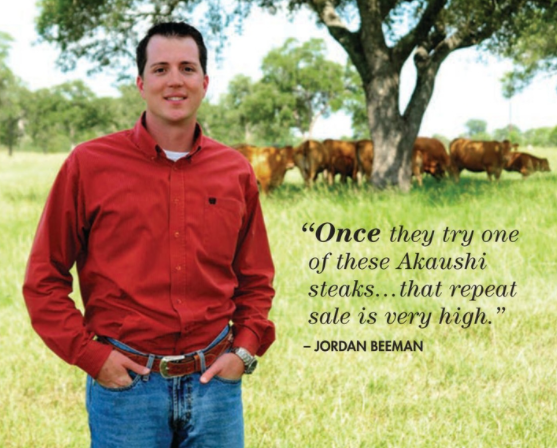 In 2016, the US Akaushi herd numbered roughly 3,000 head. Currently, HeartBrand boasts a herd of 17,000 head which includes animals that are cross breeds.

“So, we’ve just been trying to continue to grow the herd and continue to grow beef sales,” Beeman said. “We’ve had some pretty good growth over the last few years, and we’re really poised for quite a bit of growth in 2020. So, that’s been our main focus – just trying to get more Akaushi bulls out to more commercial cattle producers, so we can continue to grow our program.”

HeartBrand, which mainly serves foodservice customers added new product lines and ventured more into processed meats. The company started offering a cube steak or, as it’s known in Texas, a chicken fried steak or cutlet. Sausage and jerky also were added to the mix as HeartBrand explored new ways to add as much value as possible to each individual carcass.

Heading into March, HeartBrand’s business was doing well. And then came the global pandemic. That is when the ups and downs of doing business during a global public health crisis became apparent to Beeman.

“What’s really unique about us is that we already own the cattle,” he explained. “So, even before March when we realized all this was happening, we already had the cattle allocated; so, the growth was going to be there.”

But, by the second week of April, the outlook for HeartBrand’s growth story looked bleak, as foodservice operations across the United States shut down to slow the virus spread, Beeman said.

A survey of 6,500 restaurants fielded by the National Restaurant Association found that restaurants lost $30 billion in March and were on track to lose $50 billion in April. The NRA estimated COVID-19-related losses of more than $240 billion nationwide by the end of 2020.

With few options for growing its foodservice business, HeartBrand Beef, which historically has been more foodservice focused with a little retail, needed other options for revenue.

Retail became the best bet. Market research firm IRI, citing the most recent figures, found the meat category generated dollar sales 22% above 2019 dollar sales and 11% above volume sales. Beef was among the top-performing animal proteins with dollar sales coming in 27.5% higher compared with 2019. So, the foodservice-to-retail ratio changed for HeartBrand Beef after the negative impacts of COVID-19 hit the foodservice industry.

“We found some good retail customers,” Beeman said. “Luckily, my dad’s been in the meat business for – he says his entire adult life – I guess it’s 40-something years, so he’s had some good contacts with retail people.

“We put a lot more emphasis on our retail business, and with less people eating out and, in general, people having less to do we found that people are wanting to spend more time cooking – people are looking for something to pass their time.”

“I had more of my friends reach out to me wanting something unique or something fun to cook or to cook it on their actual charcoal grill where before they just used a gas grill because that heated up in 15 minutes,” he said. “But now they have enough time to use their charcoal grill and take an hour to heat it. So, I think that’s been a pretty big change – how they’re cooking and just kind of going back to a slower way of life.”

“It does take a little bit to get someone to try it, because it takes time to get people to spend more money for something that is still slightly similar – we’re still selling beef here,” Beeman said. “It’s not like we’re selling something completely different. So, they do have options. But once they try one of these Akaushi steaks…that repeat sale is very high.”

Despite the uncertainty driven by the pandemic, the beef industry overall recovered well from the plant closures and slowed line speeds that challenged processors. By June, the US Department of Agriculture reported, cattle, swine and broiler processing facilities were operating at more than 95% of their average capacity compared to the same time a year ago. Beef facilities were operating at 98% capacity compared to the same time in 2019. While the industry was not best served by a backlog of cattle to harvest, Beeman said that, ultimately, more premium cuts of beef were moving to grocery store shelves and into consumers’ kitchens.

“I look at the US beef supply and I really think what’s happened with it over the last five years with the Prime grade going from, you know, whatever number you want to pick – 2%, 4% to 6% or 8% somewhere in there – I just think that is a huge plus for the US beef supply.”

“Bill Fielding says it as well as anybody – that if we could get everybody in America eating a Choice or better steak instead of a Select or a Standard, we’re going to sell more meat,” Beeman said.