Gary Malenke, senior vice president of pork operations at Perdue Premium Meat Co., Sioux Center, Iowa, grew up in the northwest corner of Iowa and developed the kind of work ethic necessary to farm and work in agriculture. As a child, when the neighbor cut his hay, Malenke hoped he would get the call to work up on the hay rack.

“I was always very motivated to do something,” Malenke said of his youth in rural Iowa.

MEAT+POULTRY’s 2020 Operations Executive of the Year recipient not only grew up in the northwest corner of Iowa, he went to college there and has spent his entire 35-year career there, with a vast majority of it spent working to use innovation and business acumen to improve the plant he still works at today.

At 16 years old, Malenke mowed the lawn at the Sioux Preme Packing Co. plant, acquired by Perdue Farms in 2015 and renamed Perdue Premium Meat Co. His father, a maintenance man at the plant, provided Malenke access. He graduated high school and began his agribusiness studies at Northwest Iowa Community College in Sheldon, Iowa, but the hog plant in Sioux Center remained a part of his life.

“I mowed the lawn for a couple of years,” Malenke said. “Then, while I was going to college in Sheldon, I was loading out carcasses at night, carrying carcass halves into trucks at Sioux Preme. I did that for two years.”

After he completed the agribusiness program, Malenke started his career in Hospers, Iowa. For one year he drove a feed truck making deliveries to farmers all over the Sioux County area. It would be the only year he did not work in the hog industry. 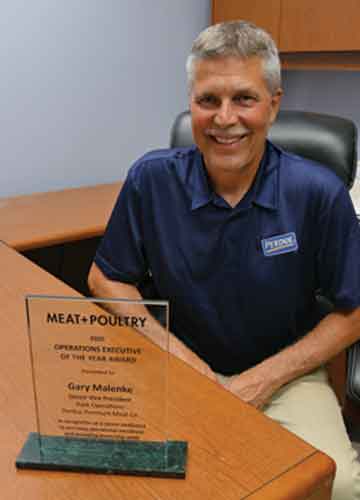 A Swift and Co. hog-buying station operated across the road from the feed company Malenke drove for. The station caught his attention, so he pursued a hog procurement position there. The Swift buying station did not have any jobs available, so he went back to the place he worked in high school and college, Sioux Preme.

“They didn’t have any openings either, but recommended I talk to this guy at IBP,” he said. “I landed an interview and position at IBP back in the late ‘80s.”

Malenke spent most of his time at IBP, Storm Lake, Iowa, as a hog buyer trainee. He sorted livestock and weighed, tattooed and penned pigs. From there, a trainee typically became a relief buyer, filling in when a buyer was out or went on vacation. Eventually, trainees and relief buyers would get their own buying station, but Malenke left IBP before that happened.

“That’s when I really started my career in the meat business, it was 1987,” Malenke said.

Malenke’s service in procurement for Sioux Preme lasted about eight years, the last three as head of hog procurement.

“I started out as a hog buyer in procurement,” he said. “About four or five years into that stint, my supervisor left the company and I became head of hog procurement.”

From the head of hog procurement, Malenke took a sales position for another eight years before settling into operations as vice president of Sioux Preme in the late 1990s. Then in 2002, Sioux Preme named him president of the company. Equity firms invested through the years, and then Perdue Farms acquired Sioux Preme in 2015 and the name changed to Perdue Premium Meat Co.

“We went through some acquisitions over the course of time from private equity folks, but Perdue was the right fit and had stability that carried us into the future,” Malenke said. “I was glad to have a bigger team to work, grow and learn from.”

The steps Malenke took on his way to operations gave him the skills he needed to make sure the facility ran efficiently and profitably. He said the chronological order of the positions he worked gave him the appropriate perspective to succeed in operations.

“Understanding exactly where the livestock was coming from, what it took to procure pigs, what it takes to sell all the products we produce from a carcass, and then to really pull in operationally what it takes to identify costs and yields, working with USDA and food safety issues, customer trends and really looking at how to grow the business, that was a great order of worship for me,” Malenke said.

In 1995, Sioux Preme began fabricating its own pigs after a joint venture with Farmland Foods ended. Malenke had just started in his sales role and remembers it as a tough time for the processor. The market conditions in 1996 and 1997 were challenging for processors. Malenke said that challenge began a change from commodity pork to something more specialized.

“I think that’s really when the realization came to us as a company that we’re not going to be able to compete with all the big meat packing companies,” Malenke said. “We needed to figure out how to do something different than what they were doing, but something that’s going to be meaningful to a customer base.”

At that point, Sioux Preme made the decision to look to the niche market. To succeed in niche marketing with pork, everyone involved needed to believe customers would recognize a premium pork product rather than continuing to view all pork as pork. Malenke said looking at the decision to move to a niche product and marketplace in retrospect might appear to be a calculated move based on foresight but came just as much out of the necessity to survive.

“In 1998, we really got into the custom processing side in a meaningful way,” he said. “We had tipped our toe into it a little bit before that, but it was really about that time in the season of the company that we said ‘hey, we’ve got to do something different.’”

No doubt God has blessed my work, and Laura my wife of more than 33 years has supported me through thick and thin, I wouldn’t be where I am without her. — Gary Malenke

This time period also marked Malenke’s second move from sales to operations. Through the late ‘90s and early 2000s he worked in operations and with the rest of the executive staff to establish Sioux Preme as a staple in the premium pork processing arena, and in 2002, the company named Malenke president of Sioux Preme Packing Co.

Because Malenke progressed first through procurement and then through sales and into operations, when the time came for Sioux Preme to pivot its business model, he possessed the experience and understanding of the pork business to not only survive the change but develop the business and thrive.

“I was selling commodity meat and managing custom processing customers,” Malenke said. “Not selling a product but a service, while managing the operational side of what we could do for that customer. We asked questions like, ‘How do you charge for your services and how do you make sure that you’re getting fairly compensated? How do you make sure you’re keeping your customers competitive in the business and growing together?’”

Malenke and Sioux Preme jumped into the niche business head-first and didn’t look back.

Malenke and his staff at Sioux Preme listened to their customers with intent and knew the animal welfare piece of niche processing and marketing would matter greatly down the road, so they committed to it.

“We made some major investments in our livestock lairage facility and we were one of the early pioneers to put C02 stunning into our facility in 2007,” Malenke said.

People and the process

The change from commodity products to niche products took some time to establish. Sioux Preme’s previous custom processing ventures helped, but as with any change, the company needed to adjust as it went. 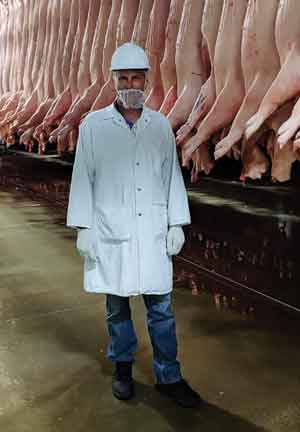 “It probably took us five years to really get refined,” Malenke said. “Determining the type of cuts and having packaging capabilities were first steps. Early on when we started in the business, using Cryovac packaging was kind of new. It was cutting edge to put something in a vacuum-packed bag given we had a lot of product that was going out paper wrapped. When you’re going into specialty and niche markets, a paper wrapped product isn’t going to work. So, for us it was an evolution of identifying not only the final products, but packaging to move ourselves forward.”

As the business increased efficiency, Malenke and his team developed an ability to discern whether a potential customer’s plan had the potential to succeed. With Malenke in charge of operations and the company’s long history of processing, the team could sense whether a customer was likely to succeed in the niche market.

“We didn’t want to invest time and energy into something that wasn’t going to materialize,” Malenke said. “I’ve been really fortunate to have a really solid team around me throughout the company,” he said, “just great teachers that have been very, very meaningful.”

Also, Malenke cites his early involvement with the North American Meat Processors Association (NAMP), serving as chair of the executive committee and president for a year, as one of his great experiences and a networking source for some of the best people in the industry.

Stan Lammers, a co-founder of Sioux Preme Packing Co. holds the No. 1 spot on Malenke’s list of mentors. Lammers’ insight into the pork business stands out still today. Malenke credits Lammers and his knowledge as the main forces that taught him the meat business. Lammers has been gone for almost 20 years now, but Malenke still speaks fondly of him.

“Some of my very first sales calls I went on with Stan Lammers,” he said. “I still remember them to this day.”

Throughout his career at the plant, Malenke has hit many milestones. The change from commodity-based products to niche, working his way up through the ranks of different departments to president of the company, adding fabrication to harvest capabilities, multiple carcass cooler expansions to handle new and increased capacity, he even bought into the company in 1998.

“I was a 32-year-old kid at the time and didn’t know what I was really doing,” Malenke said. “But I went to the bank and got a second mortgage against my house, which my wife thought was crazy. I kind of thought it was too, but when you put your own skin in the game, you think a lot harder.”

But the greatest milestone to date has been the recent completion of a $29 million expansion. During the talks that led to Perdue purchasing Sioux Preme, Malenke expressed the need for capital investment to continue the growth of the business. Once Perdue Farms acquired Sioux Preme in 2015, the parent company supported Malenke and his longtime plans to increase efficiency, but the greatest support came from home.

“No doubt God has blessed my work, and Laura my wife of more than 33 years has supported me through thick and thin, I wouldn’t be where I am without her.”

Perdue Farms provided, and continues to provide, support to the facility during this year’s coronavirus (COVID-19) pandemic Perdue Premium Meat Co. had the advantage of Perdue Farms’ East Coast locations dealing with COVID-19 before the virus made its way to the Midwest.

“We actually had some good opportunities to learn from what they were doing,” Malenke said. “We helped ourselves a bunch by taking some of their learnings and being proactive.”

The early precautions and the wherewithal to use Perdue Farms’ experience have Perdue Premium back to 100% capacity.