We use cookies to provide you with a better experience. By continuing to browse the site you are agreeing to our use of cookies in accordance with our Cookie Policy.
Home » 210 Analytics: In times of crisis, meat matters

KANSAS CITY, MO. – Any concerns consumers harbor about the healthfulness of meat have been outweighed by the fear of the unknown brought on by the coronavirus (COVID-19) outbreak. New data from San Antonio-based 210 Analytics and market research firm IRI show that sales of meat and poultry are accelerating as the outbreak continues.

“In the midst of these unprecedented times, shoppers are returning to the familiar — putting meat back at the center of plate,” said Anne-Marie Roerink, principal at 210 Analytics. “Retailers are working hard to keep their stores stocked, processing plants are ramping up capacity to attempt to keep up with the orders flooding their systems and distributors are trying to divert supply from foodservice to food retail.”

Fresh chicken gained 6.1%, or more than $16 million, over the week of March 8 versus the comparable week in 2019, IRI said. Chicken breasts sold an extra $6.2 million, or 4.5%, generating more than half of total chicken sales. Consumers also flocked toward recipe-ready chicken driving gains of more than $1.5 million in the one week, up 8.7%. Chicken thighs gained more than $3.7 million (up 12.5%) and chicken legs increased nearly $1.2 million, up 6.5%.

Fresh pork made gains as well, up 8.6% for the week ended March 8, IRI data showed. Units and volume turned from losses in the longer-term view to increases in unit and volume in the one-week view, gaining 5% for units and 3.9% for volume. 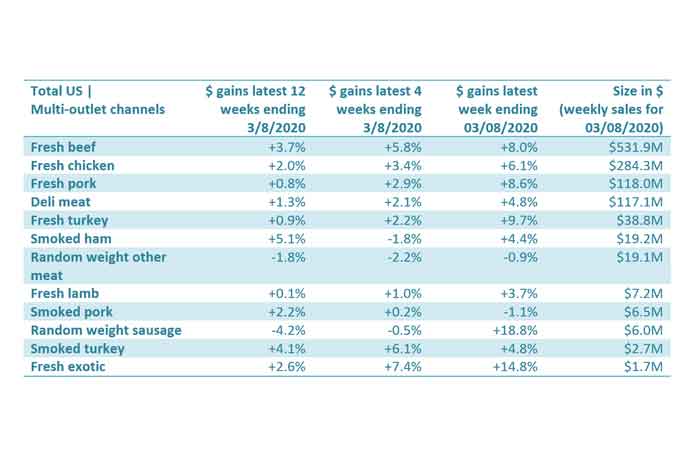 She added, “Ground is big and one of the first things that sells out. Whether beef, turkey, chicken or pork, grind sales are gaining very quickly as versatile and easy-to-prepare items.”

Sales of deli meat generated more than $117 million in sales the week of March 8, which represents an increase of 4.8% over the comparable year-ago period, according to IRI data. Deli ham and turkey each generated an additional $2 million in sales, up 6.2% and 5.9%, respectively.

Roerink said that while the number of school closures, social distancing guidelines and other COVID-19 related measures introduced the week of March 15 led to further sales surges, more time spent at home has inspired consumers to try new cuts and kinds of meat. Convincing consumers to leave their meat cuts comfort zone has challenged retailers.

Anecdotally speaking, Roerink said during a recent visit she made to the meat departments at Winn-Dixie, Publix and Walmart she saw mostly empty shelves. The remaining items often were products with low household penetration such as chicken hearts, beef tripe and plant-based meat alternatives.

“At one of the Publix stores I met Melanie Johnson, a millennial shopper who added a pork and beef roast to her cart,” Roerink said. “She said, ‘I don’t even know how to cook these, but now is the time for my family to eat nutritious foods and build our immune systems. My mom said to also look for dry beans as a backup in case the food supply gets low. Not that I know how to cook dry beans, but I guess I’m going to finally learn how to cook.’”