Flexibility for the future

There likely aren’t many people in Perham, Minn., who don’t know about Tuffy’s Pet Foods and KLN Family Brands. And most likely consider the Nelson family a household name. After all, it was almost 60 years ago when Darrell “Tuffy” Nelson started Tuffy’s Pet Foods with just 13 employees in the Minnesota lake country community.

The legacy business that has been passed on to a second and now a third generation of Nelsons has evolved from offerings of pet food to sweet and salty snacks, and back again. The family brand that has exerted its corporate and community influence on the city of Perham is now making its mark just three hours south, outside the Twin Cities, in the city of Delano.

Just shy of three years ago, the company broke ground on its 173,500-square-foot pet treat plant and since then, operations have been in full force. With the pet treat production barely at full operational capacity, the company has already adjusted its original production plans and branched out into the uncharted territory of canned pet food production.

None of this would have been possible if the Delano facility had not been built with flexibility at the forefront of its design. Flexibility has been the name of the game from Day 1 at Tuffy’s Treat Co.

“What we planned to do with this facility and what we did are totally different,” said Mark Sailer, engineering director, KLN Family Brands. “Flexibility in the plant was key. Putting canning in a treat facility, when it wasn’t the original plan, would never have been possible without built-in flexibility.”

Flexibility has been part of the Nelson family’s mantra long before the move to Delano. The family adjusted its business plans year after year following its start in 1964.

After starting his pet food business in the ‘60s, Darrell “Tuffy” Nelson added salty and sweet snacks to his repertoire when he opened Barrel O’ Fun Snack Food in 1973. By 1987, he added candy to the lineup with the formation of Kenny’s Candy & Confection (named after his son, Kenny, who later served as chief executive officer of the family business). KLN Enterprises was created in 1995 and Tuffy’s Pet Food, Kenny’s Candy & Confection and Barrel O’ Fun all became separate operating divisions.

The Nelsons moved away from the pet food game in the ‘70s after selling Tuffy’s to new owners. After changing ownership several times through the years, Tuffy’s Pet Foods was on the cusp of shuttering in 2001, when the owners at the time threatened to close the plant in Perham, Minn. At the time, Tuffy’s son Kenny was running the salty snack and candy business in Perham. Not wanting to see the pet food facility close and having around 150 employees in the community out of work, Kenny bought back the company and Tuffy’s Pet Food lived on.

Around the same time, Kenny’s son Charlie — the third generation of the Nelson family — joined KLN Family Brands and started to work on the pet food side of the business. One of his earliest accomplishments was helping to develop the company’s flagship brand, NutriSource.

Tuffy’s Pet Food Inc., is now part of a 16-acre campus in Perham, featuring a 600,000-square-foot processing, packaging and warehousing facility, which now manufactures NutriSource, PureVita and Natural Planet products for independent pet specialty retail stores and Supreme, Tuffy’s and Tuffy’s Gold brands, primarily for grocery stores. The six branded lines feature dry, wet and baked foods, jerky and semi-moist and freeze-dried treats for dogs and cats. Sixty percent of the production at the Perham plant is for company-owned brands; the rest is co-manufacturing for national brands.

In 2015, Tuffy’s opened a new $70 million, 180,000-square-foot dry pet food manufacturing facility. Since then, the company has also added an $8 million meat processing operation and a $35 million mill expansion and renovation. The Tuffy’s name and its massive manufacturing campus is a prominent mainstay in Perham. The complex spans more than six city blocks in downtown Perham and runs parallel to the railroad tracks that run through town.

In 2019, when the company set out to expand into the pet treat side of the business and plans for expansion surfaced again, the company opted away from continuing to build onto the Perham plant. Employing almost 300 people already and producing more than 150,000 tons of dry pet food annually, the Perham facility was maxed out — and the town of 3,000 residents had likely reached its capacity for an available employee pool. So, the company began searching beyond its homebase to find a home for its newest endeavor — the Tuffy’s Treat Company plant. 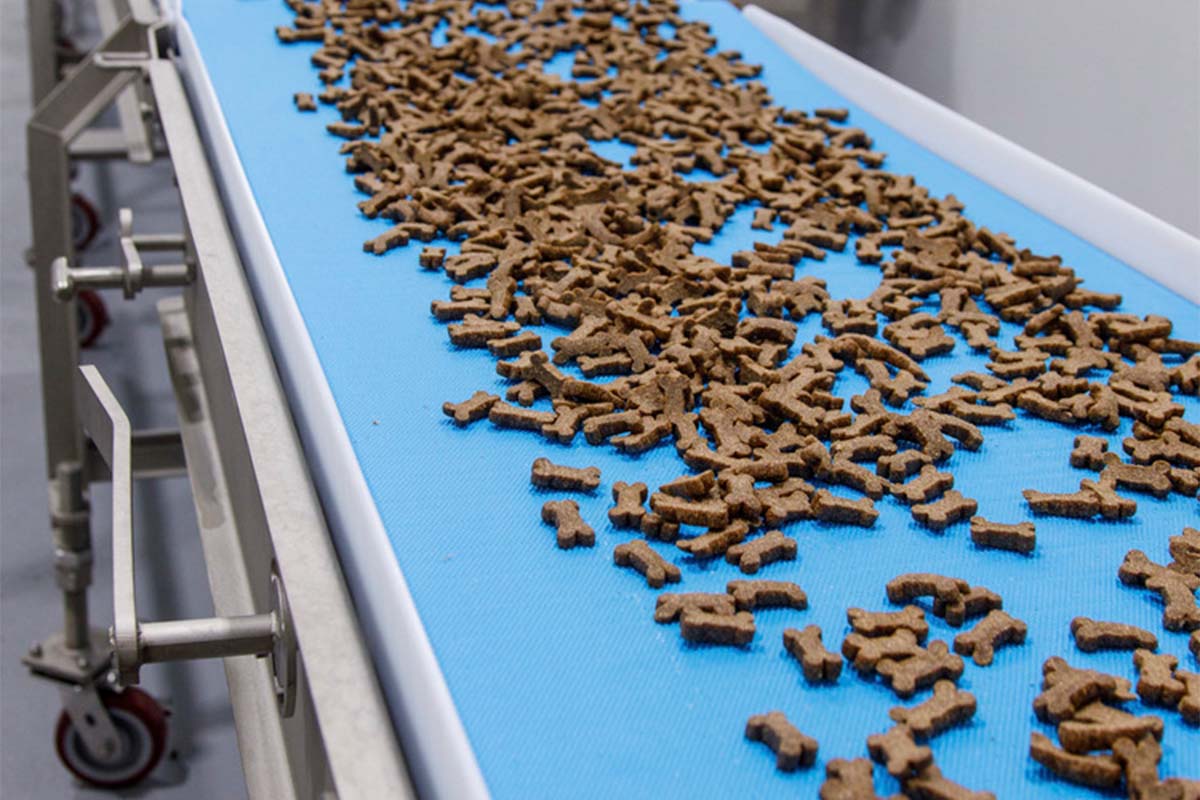 From ground-breaking to operation, the new Delano pet treat plant was up and running in 14 months. The $65 million project was on time and on budget. The plant started running one shift, producing salable product, in October 2020.

“At this time, we were a semi-moist treats facility with infrastructure to grow,” Sailer said. “Food safety and flexibility were the key priorities in the new plant.”

Three months later, a second 12-hour shift was added and by nine months after startup, three 8-hour shifts were operating.

Most of the pet treat production is co-manufacturing or private label.

“Every contract and relationship are unique,” Sailer said. “Some are very long term and detailed. We work with some of the biggest manufacturers in the world and we also work with ‘Suzy’ who is ramping up what she was cooking in her oven 6 months ago and now we’re producing it and putting it in a bag for her to make it a bit more efficient than what she used to do on her own.”

The pet treat capabilities at Tuffy’s are almost limitless. The flexibility that was built into the Delano plant allows Tuffy’s to take on new projects and products. Food safety standards that were also built into the facility provide the opportunity to offer high quality products to all their partners.

When their design-build partner, Kansas City, Mo.-based CRB, took on the assignment of designing the greenfield facility, the company was tasked with building a plant that could maintain segregation, cleanability and sanitation without risking efficiency.

Supervisors who need to interact with both areas of the plant can do so through computer controls and cameras instead of crossing over from one side of the plant to the other.

Raw ingredients, most of which are pre-blended, are brought in super sacks into the pre-batch room. Dry blending is completed and then liquid ingredients, stored in totes, barrels and drums, are mixed in.

Tuffy’s starts with 50-lb frozen meat blocks to create its own meat slurry recipes. The company incorporated a separate meat processing room into their facility so they could manage the product and keep it separate until it’s ground, mixed and incorporated into the recipes. The operation features an automated system to add liquids to the meat slurry. Flow meters and automated load cells allow the addition of up to eight different liquids to the meat slurry, automatically.

Product mixtures then move to one of the two extrusion lines. The plant was originally built to have room for four separate extrusion lines, but some of the space was taken in the short-term to incorporate the new canning line. Currently, there is one single and one twin extruder running pet treat products, usually for different companies, on a daily basis. Each line can produce 9,000 lbs of semi-moist pet treats each hour. After extrusion, grilling and cooling, the product is sent directly to packaging.

In order to stay flexible and allow for product runs of all sizes to go through the facility, Tuffy’s opted to incorporate six packaging positions into the new plant – three of which are designed for smaller batches and quick turnover. The company is currently running five of the lines and will soon add the sixth. The packaging bins feed, separate and weigh product before they are fed directly into pre-made, standup, resealable pouches or into one of two rollstock machines.

Packages are filled, weighed, inspected and put into cases before fulfillment. The packaging side of the plant is the most labor-intensive — 90% of the plant employees are involved in some aspect of the packaging process.

Canning is set up as a separate production and packaging line, with finished product stored at an off-site warehouse for fulfillment. All eight SKUs currently produced at the plant are Tuffy’s branded Nutri-Source products — 5 ½-oz and 13-oz cans for dogs and cats.

“With the addition of our canning line, we can now offer our customers a full repertoire of the brands they trust,” Sailer said. “We now have representation and space in all sides of the market — pet treats, canned meals and pet food. We’re also getting into broths, toppers and jerkies using some third-party co-manufacturers. We want to have our brand stamp on all the subcategories in pet.”