While Richard Fergola was spending most of his adult life as a special education teacher and a wrestling coach, he likely never envisioned an encore career competing and coaching in outdoor venues, where science, math and technique all meld together with smoke billowing in the background and all eyes trained on the coveted meat cooking low-and-slow inside a pit. Likewise, he and his wife probably never dreamed of quitting their jobs to spend almost every weekend of the year traveling the country to barbecue competitions and leading cooking demonstrations throughout the United States and across the world. Fergola’s career path, while unconventional, is a natural progression that makes perfect sense in many ways. Since entering his first barbecue competition about 10 years ago, Fergola’s success in the competition barbecue world has been anything but low and slow, and he is confident the best is yet to come.

As a child growing up in Topeka, Kan., about an hour west of a Mecca for barbecue, Richard Fergola remembers his parents would bring the family to Kansas City, Mo., fairly often. But those trips almost never included eating out at one of the area’s many barbecue restaurants. He did grow up in a home where cooking, usually Italian cuisine, was prominent. His mother and grandmother left a long-lasting impression on him and sparked his interest in food.

Fergola, founder and pitmaster of Fergolicious BBQ, based in Gardner, Kan., said compared to many of his contemporaries in the competition barbecue circuit today, he was a late bloomer.

“The barbecue thing didn’t really hit me until my adult life,” he said.

It was around 2005 that Fergola and his wife became ardent followers of celebrity chefs.

“The grilling thing really started to hit me probably around the mid-2000s, when food shows really started to pick up and the wife and I really got into watching those,” he said, with some of their favorites including competitive cooking reality-type shows, such as “BBQ Pitmasters,” and later, the Food Network’s “Chopped.”

Fueled by fandom, he began cooking in his backyard, albeit not very successfully. Eventually, he had the opportunity to become a Certified Barbecue Judge, by taking a class offered by the Kansas City Barbeque Society (KCBS), learning some of the finer points of what it takes to be a high-scoring barbecue cook. After judging about five contests, he took the plunge and entered his first barbecue contest in 2012 as Fergolicious BBQ, in the town where he grew up, Topeka, Kan.

“I think there were about 50 teams competing and we finished about 19th and got third place in brisket,” he said. “So, we were immediately addicted, hooked.”

Back then, the Fergolicious team was a patchwork of about seven other people, participating in the competitions as a way to decompress, relax and hang out with friends. After a handful of competitions, that group steadily diminished, leaving Fergola and his friend Jeremy Williams.

Continuing to participate in competitions for the next year or so, Fergola learned that one of his favorite cooking shows at the time, “BBQ Pitmasters,” was accepting applications from cooks for future seasons of the popular show. Shortly thereafter producers contacted Fergola about taking the next step. 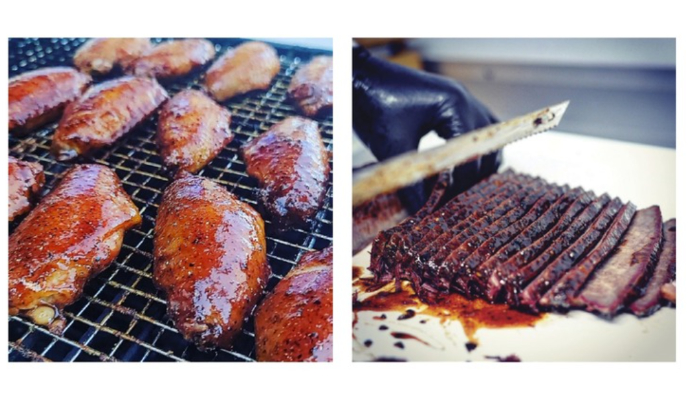 On New Year’s Eve of 2013, the casting director called Fergola and asked that he and his then-competition partner come film an upcoming episode of “BBQ Pitmasters.” Within a month, the somewhat green cooking duo was in Tampa, Fla., being filmed for the show, which was broadcast in April 2014, as part of the show’s fifth season.

“Stuff got really crazy after that,” Fergola said.

And then, stuff got even crazier. About three years after the “Pitmasters” appearance, Fergola was invited to compete on the Food Network’s “Chopped Grill Masters,” in its fourth season. He said the competition was tough, but he learned plenty from the experience. Additionally, the viewership of the show was significantly higher than “BBQ Pitmasters” and the exposure for Fergolicious was next level.

“Many different things come at you from you being on those shows; different opportunities,” he said.

Knowing the exposure that would result from being on “Pitmasters,” Fergola made a point of updating the Fergolicious BBQ logo beforehand, to the stylized neon image that depicts taking the bull by the horns, which has become ubiquitous with the brand and its upcoming line of products.

“I said, ‘We need to change our logo before we go on the show because whatever we wear on that show when it comes out is what everybody is going to remember us by.’”

After appearing on the show, the logo was used on the label of the first Fergolicious BBQ rub that was eventually launched and was featured on t-shirts, hats and sweatshirts. Fergola quickly realized that he and his brand were much more recognized on the competition trail after the initial TV show and even more so after the “Chopped” appearance.

This was when he realized it was time to transition from competing just for fun.

“We all liked all the partying and having a good time, but I found out really quick that I like to win more. So, I started to do what I do with everything in life: I’m going to give it my effort because I want to be the best at it,” he said. “I was willing to do what had to be done to become one of the best pitmasters in the world.”

More than anything, that meant cooking and competing a lot. He hit the road from about 2014 through 2017, usually competing in 30-plus contests per year.

“That’s a lot of travel, a lot of being gone from home and away from your family and it’s not always an easy thing,” he said.

Fergola came to the point where he had a choice to make about where to grow next as there were many options for the leader of a brand that had achieved worldwide recognition and success in a relatively short amount of time. Because he never aspired to be a restaurateur, opening a barbecue eatery was not a bucket list item, but he was open to other opportunities to apply what he had learned.

In the decades leading up to that point, Fergola had worked a day job as a special education teacher for about 21 years and was a successful wrestling coach for about 17 years, eight of which were at the college level, where he led a team in Nebraska to a national championship.

As his barbecue life blossomed, about four years ago he made the decision to leave teaching to work full-time as the general manager and serve as a recognizable face of a brand-new barbecue retail store in Olathe, Kan., KC Grilling Co. Staying in touch with the barbecue community and selling products he believes in (including his growing line of Fergolicious rubs) to support that community was the best part of that experience. 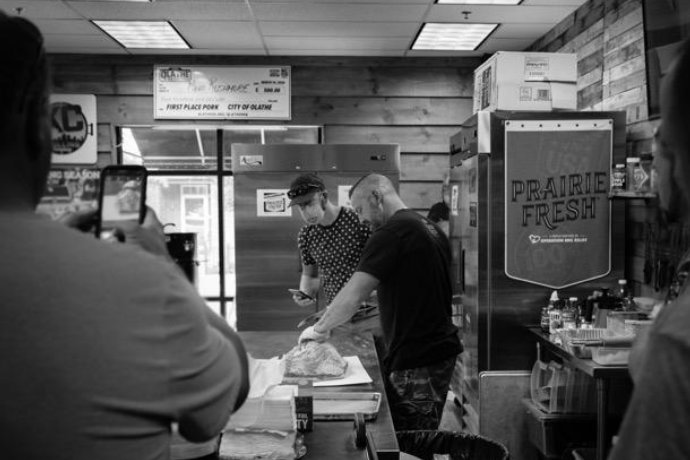 In the ensuing years he continued to compete and Fergolicious BBQ recently won team of the year, top 10 team in the world and in 2021, was crowned KCBS World Champion. All of his successes have earned Fergola valuable partnerships with barbecue-centric brands, including Royal Oak Charcoal, Green Mountain Grills and Seaboard Foods’ Prairie Fresh pork. He recently stepped away from his role at KC Grilling after four years, to ramp up his competition participation, grow his brand and pursue more opportunities to teach barbecue classes all over the country and increasingly all over the world.

“I loved my time there,” he said, “and I’ll forever be grateful for it.”

Now staying on top is the next challenge, and Fergola said for him that means staying relevant, finding more ways to engage the barbecue community and continuing to perform on the competition trail.

“I feel like in this barbecue world you go through phases. You do different things and then new opportunities open up and you decide to shift and go in a new direction. I think we’re at one of those phases now.” 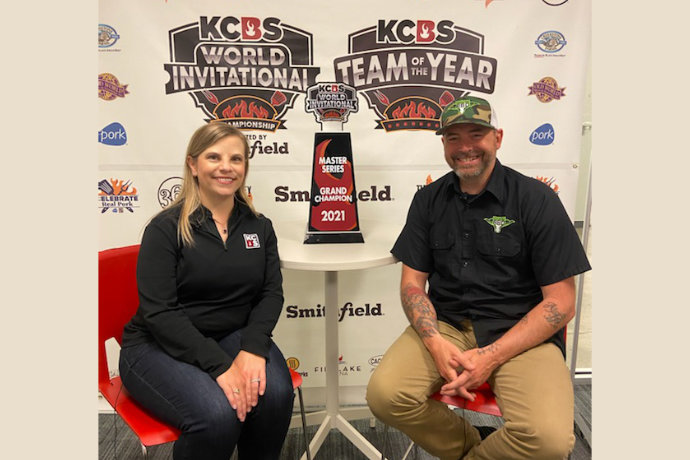 One of Richard Fergola's proudest achievements was winning the 2021 KCBS World Championship (pictured with Emily Detwiler, CEO of the KCBS).

Looking back, he said he would never be in the enviable position he’s in now if he hadn’t worked for all those years teaching and coaching.

When it comes to meat selection for competitions, Fergola said it has taken him years to discover what gives Fergolicious BBQ the best chance to win. As he and most of the other top competitive teams all know, breeds, brands and sourcing matter, he said. For example, after cooking Wagyu brisket for the first time, he stopped buying brisket from Costco.

“You don’t want to show up to a gun fight with a knife,” he said. A growing number of meat companies are catering to the needs of competitive cookers, including Smithfield, Agri Beef’s Snake River Farms, and Seaboard Foods’ Prairie Fresh.

Quality counts with all the meats on the barbecue circuit, and a quality-in, quality-out mindset is critical.

“You always want to start out with the best product you can start out with. If you have superior meat, you’re going to have a superior product at the end.”