We use cookies to provide you with a better experience. By continuing to browse the site you are agreeing to our use of cookies in accordance with our Cookie Policy.
Home » Butcher shop building blocks

The neighborhood butcher shops of old went out of business for a reason – the economics of the business are terrible. But Erik Niel and his wife Amanda decided to build one anyway – Main Street Meats in Chattanooga, Tenn.

“I honestly thought that this was the one great chance for Chattanooga to have a local butcher,” he said.

Erik and Amanda already were established in the local restaurant scene. In 2005, after working in professional kitchens the couple – both in their 20s at the time – opened Easy Bistro & Bar in downtown Chattanooga.

“Main Street Meats came to me as a kind of a kernel of an idea that already existed,” Erik Niel said. “So, some guys had gotten together before me to start a butcher shop with the idea of being locally owned, locally sourced, only whole animal butchery and they were doing a good job but struggling through the sort of economics of trying to sell enough food to make a business work.”

Chef Niel briefly got involved as a consultant. He said the brand was well accepted by the community already, and it was completely different from anything he’d ever done before. In 2014, the Niels took over Main Street Meats.

“I really sort of dove headlong into it and you know the rest, as they say, is history,” he said. “But it was a long and interesting slog to figure out how to run a quasi-modern butcher shop with old-school techniques in the modern South.”

A butcher shop in the modern era cannot survive on meat alone, so Niel adopted a hybrid model for Main Street Meats – restaurant and butcher shop.

“That’s exactly what Main Street Meats is – it’s a hybrid model,” he said. “We have a restaurant attached to a butcher shop, and we’re a USDA-inspected butcher shop. We bring in whole animals, we break them down, we have our own retail side.

“But we also have a restaurant and bar attached to it,” he added. “It’s the restaurant and bar that really makes the butcher shop financially OK. It’s the same way in a grocery store; Whole Foods can’t support a butchery without some herbal supplements and stuff like that.”

“The restaurant works, because the butchery does what it does,” Niel said. “So, if you’re looking at it on paper, and when I talk to friends in the restaurant business, they look at it and they just [say], ‘It doesn’t make any sense, like, how could you dedicate that much space to the butchery?’ But really the butchery is what makes it special.”

Niel said he is proud of the neighborhood butcher Main Street Meats has become, but it couldn’t happen without the restaurant. Butchery is a craft that requires specialized – and expensive – tools to execute. Main Street Meats already was outfitted with some of the necessary equipment, but some of the hardware needed to be replaced.

“I’ve spent the better part of the last eight years rehabbing this butcher shop, piece by piece, and you know, even when you know you’re talking about band saws and big giant meat grinders that are $20 to $25,000 a pop,” he said, adding, “you know, smokers that run 70 to 80 grand you know it is a very heavily capital-intensive project, so we had to take our time and do it as best we could.

“I’m happy we’ve done it and we’re finally kind of on the other side of rehabbing this old shop and with the equipment we have now we’re able to do so much more than we were before,” he added. 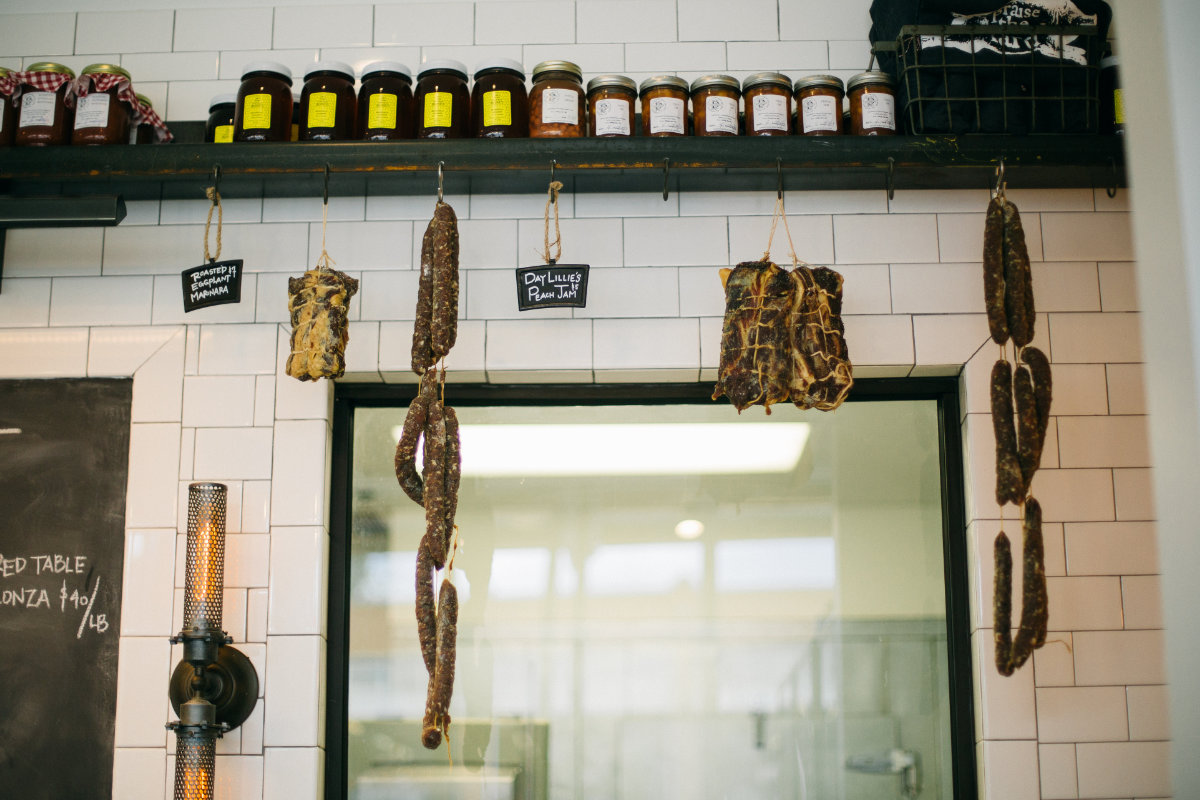 The restaurant and bar provide financial stability for the butcher shop.

Niel’s vision for Main Street Meats was to be the neighborhood butcher shop that offers locally sourced meats harvested from a whole animal. But recalling the terrible economics of operating a stand-alone butchery, Niel again adopted a hybrid model.

“We had this great internal debate when I first took over – amongst myself our other butchers, the owners that were partners with me,” he explained. “It was about bringing in what we call boxed beef.

Niel said the argument in favor of the “holistic side” of the business was to just break down one whole animal and then try to sell the pieces of it. The problem came when one animal produced about seven to eight beef filet mignons, and that cut is one of the shop’s No. 1 selling SKUs which meant a lot of money was being left on the butcher block.

“And so, what we did is we went out and sourced boxes of beef that were very similar and sort of our aesthetic and our desired quality range and production ability,” Niel said. “It was the same kind of farmers that we like, and [we] supplement beef tenderloins, ribeyes, strips and butchers’ cuts to the beef that we’re buying because we have to, because at this point, we sell, I don’t know 30 to 40 whole tenderloins a week and we’re only taking two off the animal that we bring in every week, so we had to make that jump.”

So, Main Street Meats buys a very expensive product that is sold for a low margin. Niel said, “It’s great; it’s exactly what we needed to do to make the butchery work.”

Niel and his partners worked with different suppliers to dial in the kind of whole animal – beef and pork – that was needed.

“In the beginning, we had pig farmers that were bringing us animals that were whole carcass weights of 500 lbs, I mean they’re almost as big as the cows,” he said. “And we learned really fast that, man, that pork tasted amazing, but we lost money on every single ounce of it that we sold because of the yield off of it.

“So, a 500-lb pig dressed you get a lot of fat, you get a great pork loin, a beautiful tenderloin and the hams are amazing. But because we bought it by the pound, we had some extraordinarily expensive lard that we can’t make any money off of,” Niel said.

“If we were doing this for a pig roast – great that’s beautiful. But doing it to put the pork chops in a retail case it didn’t work at all,” he added. “You know, the sausage we were making we would have had to sell it for over 20 bucks a pound, and 20 bucks a pound is just way too much to sell sausage for.” 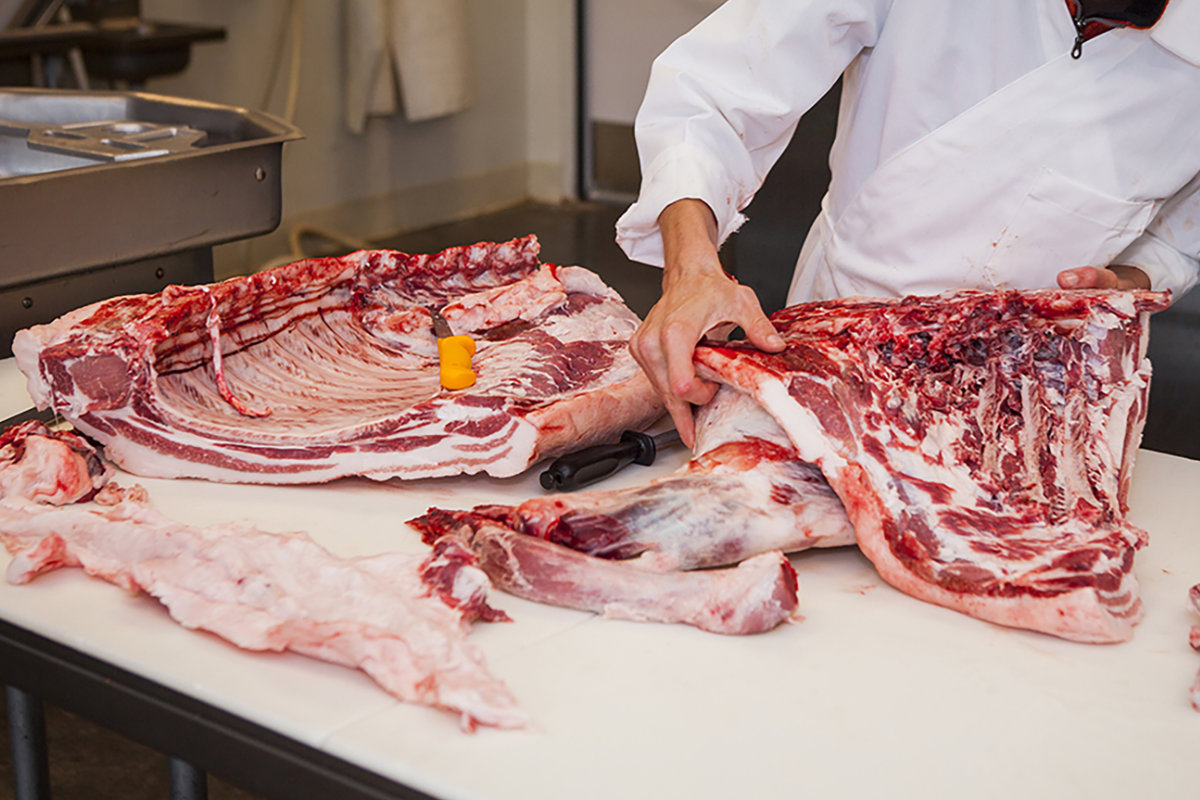 The butchers at Main Street Meats are former cooks who found the shop as a way of staying involved in the foodservice industry while practicing their craft.

A particular set of skills

The backbone of Main Street Meats are three guys that work in the butcher shop and that have been with the business for about six-plus years now.

“I’m forever grateful to have them as part of the job,” Niel said. “They are butchers; I am not a butcher. I could muddle my way through it if I needed to, but I am a chef and a business owner and I understand this process but I’m not the one on a daily basis, breaking down whole animals.”

All of the butchers are former cooks who found Main Street Meats as a way to stay involved in the foodservice industry, hone their craft and develop skills that differentiate them from being on the line or running a professional kitchen.

“It’s a pretty amazing feat to see what they’re able to do,” Niel said. “They’re all in their own rights amazing chefs and are some of the best cooks I’ve ever worked with and they’re all butchers and it’s almost happenstance or kismet that I get to work with these guys on a daily basis, who are so talented who have decided that this is where they want to be at this part in their careers.

“And it’s pretty awesome but you know if I were to have to wave a magic wand and put this crew back together again, I don’t know that I could do it, because it’s a very special circumstance that kind of drew these three people together to make it work.”