It was the day of the of the Hudson Foods’ ground beef recall, where more than 25 million lbs of ground beef were recalled for E. coli. The recall came just a few years after the US Department of Agriculture’s Food Safety and Inspection Service (FSIS) had declared E.coli O157:H7 an adulterant in ground beef and instituted an industrywide testing program for the pathogen. At that time, the recall was the largest in US history.

It was an important day for anyone working in the Nebraska beef industry, and also for Brashears.

Aug. 13, 1997, was also Brashears’ first day on the job as a faculty member and extension specialist at the University of Nebraska. Thanks to this new job, the 25-million-lb recall was not only an issue for Hudson Foods, but for Brashears as well.

“I will never forget my first day on the job,” she said. “I was hired in extension to work with the media, so on my first day, I was on the phone doing interviews with the Omaha World Herald answering questions about the recall. I got thrown into the deep end right when I started my career.”

Brashears served in that role at the University of Nebraska for five years before moving to Texas Tech University (where she earned her Bachelor of Science degree in food technology years before). At Texas Tech, she moved up the academic ladder from assistant professor to associate professor, and eight years later to full professor, a role she holds again today.

But while she never shed the title of scientist, she left her academic comfort zone in Texas for two years to answer an unexpected call from Washington. 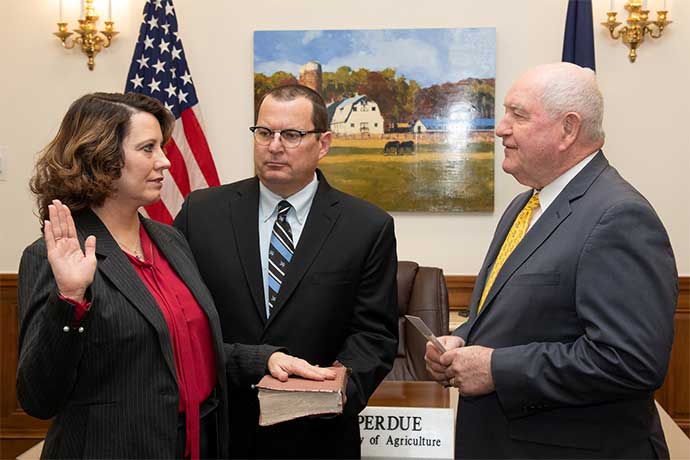 Mindy Brashears, PhD, started working as deputy undersecretary of agriculture in January 2019, and was sworn in as undersecretary in March 2020. Source: US Department of Agriculture

Brashears’ journey to DC – to her roles as deputy undersecretary and later undersecretary of agriculture – was no different than any other activity in government – hurry up and wait.

She was first contacted for the job of undersecretary of agriculture in December of 2016, started work as deputy in January of 2019, but didn’t get fully confirmed until March of 2020.

“I got a text message from a congressional rep in DC asking, ‘Can we throw your name in the hat for this position?’ I said, ‘Sure.’ I mean, it’s great to be considered. I never thought I’d be chosen for the job. I’m not a political person, I’m a scientist,” she said. “And then there was another call and it got elevated to the White House liaison, and then I’m at the White House having interviews and meeting the secretary. Then I’m sitting before a Senate hearing.”

However, it took almost two years – until November of 2018 – to have that hearing in the Senate, thanks to slowdowns with the Brett Kavanaugh hearings and midterm elections.

On Dec. 21, 2018, Brashears was told she got a unanimous consent package and would be voted on and confirmed as undersecretary the next day. Then the government shut down.

After several weeks of the shutdown, followed by a new Senate taking office, the process was virtually rebooted and confirmations were put on hold. Considering the two years that had already gone by and all the vetting that had been done along the way, Secretary of Agriculture Sonny Purdue decided not to wait any longer and hired Brashears as deputy undersecretary. She began her work at USDA under that title in January 2019. Senator John Neely Kennedy (R-La.) put a continued hold on all USDA nominations, but it didn’t stop her from diving into the work she was brought on to do.

In March 2020, one year into her Washington job, as the Senate started to debate and approve the first COVID relief package, Senator Kennedy removed the hold on Brashears’ confirmation alone, and she was officially confirmed and moved up to undersecretary of agriculture.

“The job was technically the same, it didn’t really change at all,” she said. “I had all the same responsibilities and functions; it was just a title change and an official Senate confirmation.”

Despite having to jump through the political hoops of Washington, DC, in order to end up at the USDA, Brashears never considered herself a politician. In fact, she always felt her experience as a scientist was exactly the prerequisite the USDA was looking for.

“My primary job was to go in, as a scientist, and make sure that decisions being made were science-based and data-driven. That was my charge; that was my objective from day one,” she said.

Swine slaughter modernization was first on the agenda, and she approached the project as a scientist, not a politician.

“I spent hours and days reading piles of documents about pork modernization. Then I went to traditionally inspected plants and to those in the HIMP (HACCP Inspection Models Project) program, to see how they operated. I thought, ‘this makes sense,’” she said. “Modernized inspection is switching from a fully visual inspection to a food safety focus. It’s taking HACCP to the next level. We’re moving from what we did in 1906 to what we should be doing now – and there’s so much data to support it.”

“My mission right now is bridging that gap and getting everyone to work together and not be afraid to share data with each other. That’s what I’m working to facilitate and coordinate.”

HIMP was designed to allow for more efficiency and flexibility in slaughter inspection and for more focus on food safety preventative controls identified in the plant’s HACCP plan. The next evolution of HIMP was the New Swine Inspection System (NSIS), which became final by the end of 2019, during Brashears’ term at USDA. FSIS established NSIS to improve the effectiveness of market hog inspection, to make better use of the agency’s resources and to remove unnecessary obstacles to industry innovation.

“The biggest thing I wanted to achieve while I was in Washington, was a change in the culture at FSIS to really being data driven and to appreciate science, as opposed to always being driven by policy and saying, ‘Well, this is going to take five years – so we’re not even going to go down that road, because it’s going to take too long,’” she said. “Changing that culture was important to me and I think the agency started moving in that direction.

“When COVID hit, the actual role of the agency shifted to being focused on managing the food supply chain. We learned quickly that food availability is a matter of national security, and we’ve taken that for granted in the past,” she said. “We worked closely and collaboratively with meat and poultry plants to ensure that we had food in this country – and that expanded beyond just meat and poultry. We worked closely with FDA to make sure these companies weren’t closed down, so we could maintain the integrity of the food supply. The COVID pandemic was by far the most challenging thing I faced during my time at USDA.

“I was so grateful for Secretary Purdue – for his leadership and the way he helped us through it. I was honored to be a part of that process.” 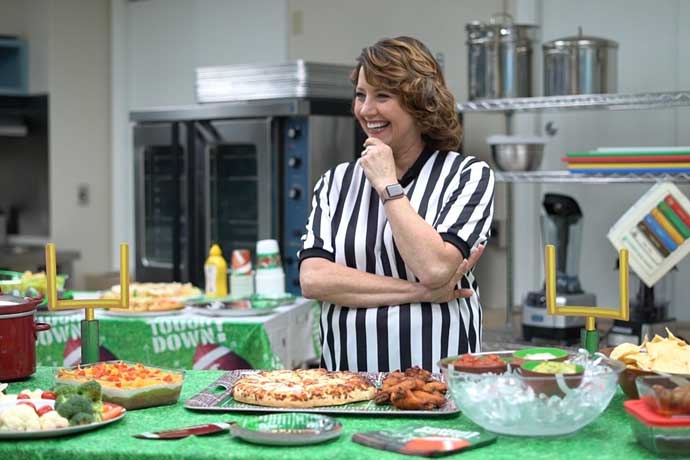 Brashears’ appointment as undersecretary of agriculture ended with the new administration, which forced her back into the job market and the decision of whether or not to return to academia.

“I had many opportunities when I left USDA for administrative positions at other universities, which were all great. I love academia. I love being back in academia – mentoring students and really raising up the next generation of leaders. After exploring many other options, I just knew that Texas Tech was where I needed to be.”

Brashears returned to her role as professor in the department of animal and food sciences, that she had held since 2009, and added the role of associate vice president of research at the university.

“The reason I specifically wanted to go back to academia and not necessarily the industry was that when I was in DC and someone came to talk to me, they usually had their mind made up – no one was very willing to learn and change,” she said. “But when you’re at a university and you’re mentoring students, one on one, when they’re in their early 20s, that’s when you really have an influence on that person. You can shape their ideas, the way they see the world and really make a difference in the industry. There aren’t very many environments or jobs where you get to do that.”

In addition to her time spent teaching, mentoring and conducting research at Texas Tech, Brashears now spends additional time, post-USDA, doing public speaking, conducting webinars and interacting with industry. She’s often asked to share her perspectives and insights about ways to bridge the gap between government, industry and academia.

“When it comes to government, industry and academia, everyone has a different approach,” she said. “In academia, a scientist is working to get published, to get tenure, they’re not really concerned with application. In industry, the scientists are working solely on the application to their particular process. And in government, scientific data are used just to establish policy. If we could just bring all of those entities together, I really think we’d have a strong synergistic foundation to move the bar forward in food safety and really make an impact on things now. At the moment, things are pretty siloed.

“My mission right now is bridging that gap and getting everyone to work together and not be afraid to share data with each other. That’s what I’m working to facilitate and coordinate.”

Years down the road, Brashears anticipates still working in academia, possibly switching gears to an administrative role. But for now, her focus is honed on teaching, research and food safety.

“I feel like my area of influence and passion is genuinely in food safety. I think if I went into administration, my knowledge would be lost, and my focus would change. I’m not ready for that right now – in 10 years, maybe. I can’t imagine ever not being associated with students and mentoring students and investing my life back into that generation.

“For now, I want to work closely with industry, developing and implementing new food safety technologies. I have a strong passion for pre-harvest food safety – that’s where I began my career. I think the future of food safety lies in more of a systems approach – how do all of the interventions work together to control the safety of the final product, as opposed to at just one point in the process? That takes us back to pre-harvest. I think in the future, the regulatory side is going to be driving pre-harvest – we’re going to have to be doing more on the farm. Every part of the production process is going to have to work together to embrace new technologies and interventions.”

People Food Safety US Dept. of Agriculture
Subscribe to Our Newsletters