It’s a small, family-owned and operated meat processing business now in its fourth generation, and with the onset of COVID-19 over the past year, it’s a business that many Central Pennsylvanians rediscovered.

Holland Brothers Meats, located in Duncansville, Pa., not far from Altoona, started out when William Holland, the great-grandfather of the present owners, sold strawberries at local markets but had a crop ruined by bad weather.

He had 12 kids to raise and knew a lot of the local farmers. To maintain an income, he and his son, Terry Holland, began processing livestock for farmers in the area. In 1964, they peddled meats from a panel truck and later operated a small stand at a farmer’s market to sell retail meats with only a small display case and a freezer. By 1968, they decided to buy some land and build a small processing shop.

William’s son Lou joined the business in 1967. Grandsons Steve Holland and Rick Holland had returned from their military service in Vietnam in 1969 and decided to come to work for them, eventually buying out Terry’s share in 1972, about the time meat inspection oversight shifted to the Animal and Plant Health Service (APHIS).

It was a single-story building erected on a hillside. The processing, cooling and freezing area was later moved to an additional lower floor where the retail had once been – and was then moved to the upper level.

Mike Holland, now 38, and his cousin Brock Holland, 43, purchased the business from their fathers. They both say they learned the trade on the job.

“If we provide a meal that serves 100 people, chances are good that perhaps 30 of them will come and shop with us for the first time.” Mike Holland

“I know that they [their fathers] always challenged us to do better,” Mike said. “When we went to trade shows run by the Pennsylvania Association of Meat Processors (PAMP) and the American Association of Meat Processors (AAMP) they always found time to network with other small processors. These folks were pouring out information that always made us better. Dad used to say I had to listen because ‘your ears aren’t working when your mouth is talking.’”

Learning on the job

Mike does the cutting for retail and works on the kill floor while Brock, who also works the slaughter floor, is in charge of the growing catering end of the business. What they learned from other processors at seminars and trade shows they began implementing to improve and expand their lineup of smoked and cured value-added products.

“One guy that I always listened to was Gary Bardine, from Bardine’s Country Smokehouse in nearby Crabtree, Pennsylvania,” Mike explained. “He was the guy to beat in cured meats competition and I think he knew I was always anxious to learn. I suspect that he saw in me himself from earlier years and he was honestly trying to help me.

“We competed at the PAMP shows but always seemed to finish second behind Gary, who’s now in the AAMP Cured Meats Hall of Fame. Then one year, we finished second again to Gary in the ham competition. The next announcement was for the bacon championship. They announced us as the producer of the Grand Championship bacon...Gary was second. I knew we had arrived.”

Since then, Holland Brothers Meats has gone on to win countless awards in cured meats competition, including national championships in bacon, hams, kiolbassa and hot dogs. They continue to return the favors of knowledge given to them years earlier. Mike serves as 2nd vice president of PAMP and as a regional director for AAMP. 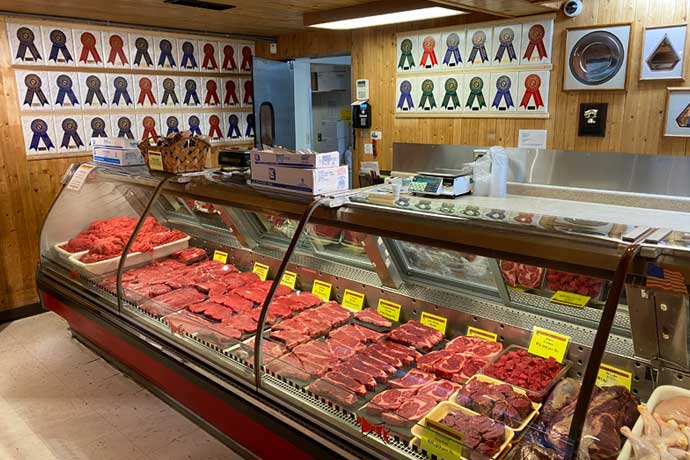 Holland Brothers Meats features an expansive fresh meat counter in its retail store.Their catering business took off when, during the struggling days, another processor told them they needed to roast some pigs. Their reputation for pig roasts and smoked hams grew tremendously ever since. The catering menu on their website, hollandbros.net, is a veritable textbook of ideas for newbies and old hands alike.

Under Brock’s tutelage, the catering division has zoomed to represent 20% of the company’s sales. Even during the COVID-19 pandemic, when many larger events were cancelled or postponed, Holland Brothers Meats put emphasis on their pick-up catering program, including their renowned roasted pigs. Indeed, they offer such staples as picnic lunches, roasted turkeys and hams. About 10 years ago, the processing company began featuring two versions of their Commercial Breakfasts for area companies to entertain or reward employees. Another specialty is their four styles of Commercial Lunches suitable for 40 to 100 persons.

Mike explained some of the logic behind their low-cost commercial breakfasts and lunches:

“If we provide a meal that serves 100 people, chances are good that perhaps 30 of them will come and shop with us for the first time,” he said. “We deliver and serve but do not cook off premises. We are closed on Sundays but offer a pick-up service for larger events scheduled for that day of the week.”

He noted that the pandemic left a multitude of people in their area finding regular grocery stores scarce or out of meats. Working with local livestock producers like Angus View Farms, for whom they processed about 50 beef cows a year, they were able to obtain from them some needed cattle during the shortage. The generations-old business began promoting on the internet and social media and attracted throngs of new customers. 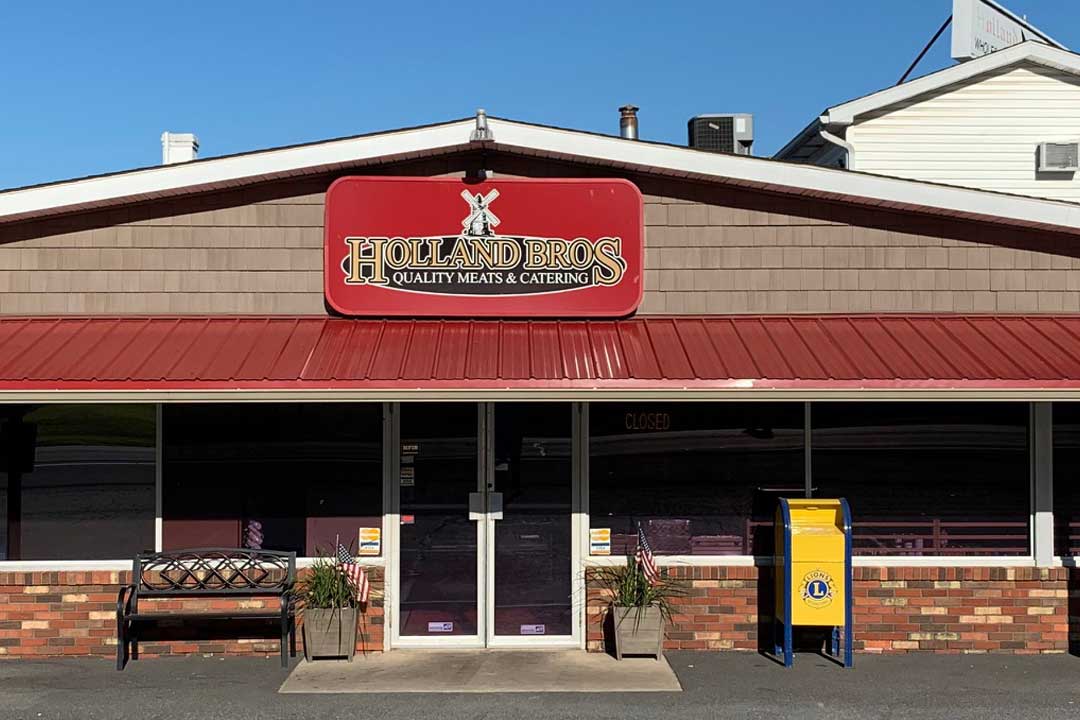 Mike Holland said plans are in the works for developing more frozen prepared meals, but a plant expansion isn’t in the cards. “We would have to go up and aren’t really interested in being a skyscraper specialty meat processing shop. I’d say we are there,” he said.

“We played on our quality and availability of a large variety of meat choices in our advertising,” he said. “We used an agent to place our advertising on flyers, radio, some TV spots and special events. Our ads let them know that we had the country’s top award-winning hot dog right here in our specialty meat shop. Many folks came just out of curiosity and most of them kept coming back for the quality and personalized service. We still hand-cut meats to their individual order.”

Mike and Brock used their business growth proceeds to reinvest in their company. They recently bought a new Enviro-Pak smokehouse, giving them four, as well as a recently purchased Kerres thermal processing house, as they continuously upgrade the company’s equipment.

“It was a tough year for many of our customers, new and old,” Mike said. “But we could see there was a strong comfort level with us when they came here and when they left.

“As for the future, we might add some wall freezers to give us more display and storage area in our retail shop, which represents 70% of our volume. The facility is located on a slope, with most of the processing done on the upper level. Guess you could say it has its good and bad points, but there is little room to grow the present building. We are looking at developing more frozen prepared meals. I don’t think it’s in the cards for a plant expansion. We would have to go up and aren’t really interested in being a skyscraper specialty meat processing shop. I’d say we are there,” Mike explained.

Whether or not they decide to expand in the future, Mike credits most of the company’s success to his employees and co-workers.

“I’ve got to add a very special note of thanks and appreciation to our 16 employees,” he said. “Without them we would be just two guys trying to do the impossible. So much of our success is attributable to those workers every day.”

Holland Brothers Meats does a steady business in seasonal game processing, taking in only boneless trim, which they turn into replicas of their award-winning products. Among the firm’s best sellers are their hot dogs, smoked hams and bacons, but among their best features is their tradition of honesty. The company has a few Pennsylvania favorites such as scrapple and pork pudding, as well as an ox roast sandwich composed of slow cooked chuck roast with the juices kept inside the meat. They’ve also erected an outdoor pavilion where customers can enjoy their products on site.