There are many ways one can measure the success of a small family-operated meat processing company. For those familiar with McDonald’s Meats in Clear Lake, Minn., the yardsticks are manifold and telling.

First off, the fact that this April the company celebrated its 107th anniversary is a rare achievement. The former dry goods general store (which once sold no meat) has blossomed into an award-winning manufacturer of specialty meat products. Add the expertise of fourth-generation managers Jennifer Dierkes and Travis McDonald and few would argue the company has an enviable recipe for business succcess. Dierkes still remembers getting off the school bus at age 14 to work in the meat shop.

“Each morning, I would pack my work clothes into my backpack alongside all my school books to save me the time of being dropped off at home and having to ride my bike a mile to the shop,” she said.

Dierkes did everything that was asked of her and fondly recalls one of the first jobs they were tasked with as kids was to hand out jerky samples to the cars sitting in backed up traffic on Highway 24, which borders the plant.

“There was always a big traffic back up before they installed stop lights at the main intersection in town. We took little bags of jerky samples, stapled a business card to them and passed them out to the people waiting in their cars for the road to clear.”

Dierkes went to college and got a degree in business management, McDonald got a trade degree in HVAC. They later became the fourth generation of the McDonald family to work in – and eventually run – the shop.

“The original store didn’t even have electricity or refrigeration,” she said. “They had an icehouse stocked with slabs of ice they cut from the lake. It wasn’t until the 1920s that they began selling meat after electricity finally made it to the small town.”

Dierkes, now 46, has served as production manager, a position now held by McDonald, and later as company manager before assuming the title of general manager. When she and McDonald took over the business in 2005 from their dad, Steve McDonald, there were 15 employees working in the 7,000-square-foot plant. Today there are 43 and the facility has grown to 26,000 square feet. 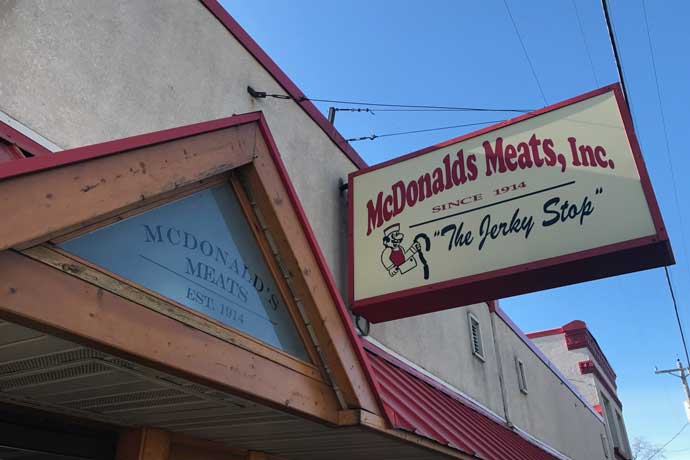 The latest expansion was completed in 2017 and all production was moved into the new area. McDonald’s operates under USDA inspection, does custom slaughter and processing (about 15% of their volume) as well as wild game processing year-round (20% of volume). The company does some wholesaling and co-packing for 10 other firms wanting to market products under their own names (10% of volume).

It is the retail sales department that racks up 55% of the volume, including the on-site sales area and the ever-growing internet and social media markets.

“We are also known as ‘The Jerky Stop,’” she said. “We make 23 different kinds and flavors of jerky. That includes 13 beef versions, two pork based and five made from turkey along with bison, elk, and venison. On our mail order sales, we feature 25 products which we want to expand to 100 products very soon.”

And speaking of variety, award-winning hams, smoked whole and half turkeys, along with smoked turkey filets and drumsticks abound in the retail shop. It’s almost a tune-up for customers to gaze into their bacon lineup where 13 versions are there for the choosing. How about apple cinnamon, pepper garlic, Italian, raspberry chipotle, venison, beef and turkey bacon? It’s all there right next to the Canadian and cottage bacon, the jalapeño flavored and almost bacon (100% pork). A glimpse at the myriad of flavors offered is enough to think about bringing more coolers for the next visit.

The store is in the Minnesota lakes area, about 10 miles from St. Cloud, where shoppers load up for their fishing and hunting camps. That means the store is a honey hole for freshwater fish and saltwater seafood, deli meats and no less than 20 types of cheese, including curds. Gourmet pastas, sweets, sauces and rubs and a menu of party foods at the retail counter brings them in and keeps them coming back.

Fresh and uncooked and fully cooked sausages abound in this “76 trombones” version of a meat display, just a few steps from the smoked and cooked brats and the national award homemade wieners. Ever hear of an “Everything Omelet Bratwurst?”

What about summer sausage? It’s there in 11 flavor profiles. Also featured are the dozen versions of snack sticks.

If variety is rampant in a shopper’s delight, it’s the quality that brings them back to reload.

“I felt I knew the business management and accounting end of things, but I knew there was always more to learn on making consistent high-quality meats,” Dierkes said. “I went to every meat seminar and short course on making products...the universities of Minnesota and Wisconsin, Iowa State University...you name it, and I went there to learn. And another great help was visiting other small family-run meat processors. There is a bond there and you always came home with new tips and great product ideas.

“I would say that we don’t really have a signature product – it’s the astounding variety in our small shop that makes us stand out. We can brag that we won nine gold medals from the German Butchers Association at the IFFA show in Frankfurt in 2016 and 2019, but to me, a very special time was when we won the Best of Show at the cured meats competition at the Minnesota Association of Meat Processors (MAMP) two years in a row.”

What made it so special? “Because no one wins it with a braunschweiger,” she said.

Dierkes’ learning curve skyrocketed further when she became involved as a member of the MAMP board for 24 years, including two as president of the organization. Two years ago, she was elected to the American Association of Meat Processors board of directors.

Custom processing for sportsmen is a year-round activity at McDonald’s Meats. They smoke fish, pheasants, and turkeys and do big game animal processing on whole carcasses or trimmed meats, fashioning that protein into versions of the tasty items. Dierkes says they will try to make anything the customer wants if they have enough quantity. Most of their game and custom processing information is listed on their website mcdonaldsmeats.com.

Marketing is something that can be taught, but for Dierkes, it’s an innate gift that she doesn’t take for granted.

For promotion, McDonald’s uses some newspaper and radio advertising and a pair of billboards. But things really get smoking in the warmer months when an outdoor barbecue and smokehouse operation sends the enticing scent of cooked burgers, pork chops and bratwurst into the parking lot, attracting customers and passersby.

But all the marketing skills in the world can’t guarantee financial success.

“A lot of people in the meat business have a deep passion for what they do...but they don’t always know accounting,” she said. “You can do what you love to do, but you have to make sure you’re financially successful for the sake of your family and your employees...and even your customers because they want to see you succeed as well.

“Everyone working in our company has a title and a job description and they have to know what’s expected of them. We have high expectations of our staff and we have put together a great team that cares greatly about the products and service we want to give our customers. That means when a complaint comes in, it’s hard for them not to get defensive. I always caution them to research every complaint until we figure out what happened, be it product or process,” she said.

“I tell them the story of one year when we had a customer tell us the bacon we made from his pig just didn’t taste right. He was very nice about it and didn’t want to complain. We checked it out and found we had forgotten to use salt in making the bacon. Yup, bacon without any salt. We contacted all of our customers from that curing batch and replaced their bacon.”

It’s that kind of thinking that is leading this meat shop owner to ponder the next challenge on her business wish list: “We need more parking area,” she laughed.