In the ethnic Ukrainian community around Edmonton, Alberta, Canada, there exists a small meat shop where the flavors of the Eastern European homeland abound, thanks to Baba Widynowski’s family recipe.

Baba (which means grandmother in Ukrainian) shared her sausage recipe with two younger family members who made it for a party they were throwing on the farm. Family and friends were delighted with the taste and jokingly suggested that the two should make it and sell it. They liked the compliment and took the notion seriously. In 1984, they started a very small meat shop with almost no equipment except for a hand-cranked stuffer.

Now, more than a quarter century later, Widynowski’s Ukrainian Original is a mainstay that is attracting customers, both old and new, to the family’s specialty meat company – Widynowski’s Sausage House.

Tyler Hawryluk, son of one of the founders, Greg Hawryluk, today holds down the titles of owner and director. His uncle, Robert Widynowski, the other co-founder, retired three years ago.

“It’s a simple family-owned and operated meat processing business that believes in offering a quality product and personalized service,” he said. “And it all started with Baba’s recipe that we stay true to today. We do take the time and care to make it right.” 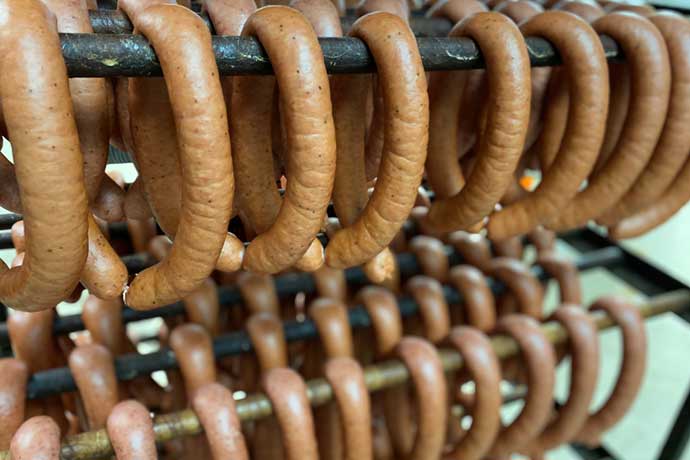 For those who have never tried Ukrainian sausage, it should be made clear that garlic seasoning is part and parcel of the finely ground pork mixture, with a bit more fat content, and a natural casing. That version, the original recipe, is referred to as Ukrainian Traditional. Then there is the shop’s Ham Garlic Sausage, which can be baked, grilled or eaten cold. As the name suggests, it too is a garlic-flavored item.

The other big seller is the Pure Ham Sausage, another version that doesn’t disappoint with its heavy garlic taste.

Operating under provincial meat inspection, the shop is primarily a retail and custom-processing-based business. Featuring primarily pork products, it uses a regional packer to supply its meats. The 6,000-square-foot facility includes a 500-square-foot retail area and a staff of 10 in the meat department. Another five work in making ethnic foods like perogies and stuffed cabbage rolls.

Perogies – dough pouches with fillings – are available stuffed with cheddar or cottage cheese and potato, onion and potato, or Widynowski’s own twist on flavor...sausage and cheddar with no potato. They use their ground Kubbie sausage to add meat flavor.

Cabbage rolls are offered in a sweet (rice, cabbage and onion) flavor as well as a sour version that utilizes its in-house soured sauerkraut with rice and onions.

Tyler’s father Greg still works at the shop when needed and lends his experience as the company has developed tasty pepperoni sticks, a variety of jerky (regular, pepper and teriyaki), sausage wieners, bacon and a garlic-laced headcheese.

“I used to help out at the shop in the summers,” Tyler explained. “I went on after graduation from high school to earn a degree in accounting and actually worked for a local utility company for eight years. When the opportunity to take over this family business presented itself, I was ready. After all, I had been around it for nearly 20 years. 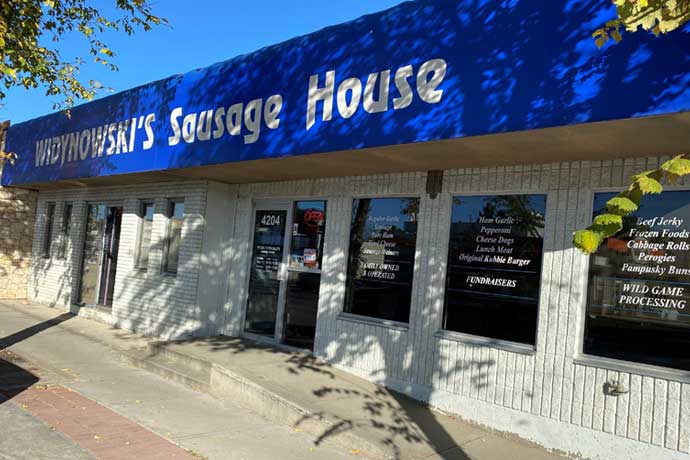 “With my accounting background there were certain things I felt necessary to get done almost immediately after opening the shop under my management. I installed a software system that replaced the old cash register with important information systems that tracked what was being sold and when it was being sold. With the information that those numbers provided, I was able to do some planning and forecasting. That resulted in changing even the days and hours we were open as a business.”

Over time, Tyler put more emphasis on the fundraising business his company could provide to local organizations, particularly around the holidays. With the excitement that program generates, he really doesn’t have to advertise.

While retail sales represent most of the company’s business, another chunk is from game meat processing. The fundraising opportunities help cement its relationship with its ethnic customer base and attract new shoppers from those who bought from fundraising groups or those involved who felt supported by Widynowski’s program. The fundraising program is highlighted on the company’s website at sausagehouse.ca.

Then there is the pastry aspect of this ethnic market. With uncommon names but unforgettable tastes, pastry demand is popping. For example, customers can find pompeshke, a Ukrainian donut loaded with prune or poppy; nalysynky, a crepe filled with cottage cheese; and finally a pedishke, a pastry treat laden with cottage cheese and potato. 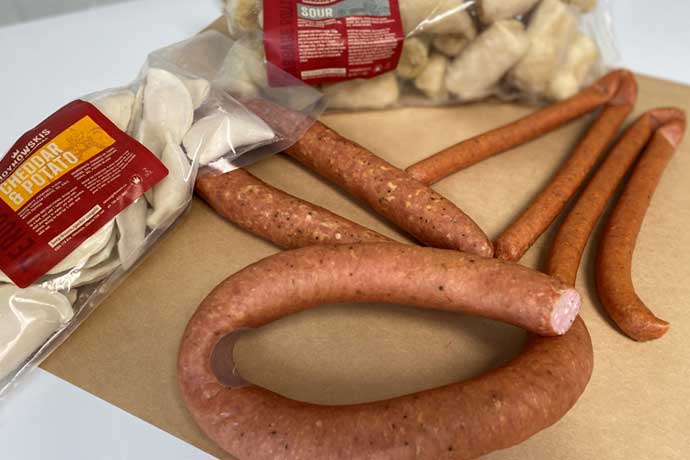 Tyler, now 37, said the fundraising programs suffered at the onset of the COVID-19 crisis.

“People just weren’t holding cookouts and gatherings like they were in the past and that hit us hard,” he said. “The Ukrainians love their foods at gatherings, particularly around the holidays. We had to implement two shifts to mitigate our staff distancing issues, put up shields that separated us from the customers and then get used to everyone having to wear masks.”

The Canadian company also does a steady game processing trade that seemingly goes on for most months of the year. They only accept clean boneless game meats and make them into specialty meat products for their customers.

Tyler noted that while the old hand-crank stuffer is still around, it’s been replaced with more modern equipment...“nothing fancy or major...a digital stuffer and a few things to help us increase our capacity.”

When looking to the future, Tyler’s accounting background kicks in.

“Maybe in a few years we can see that the capacity of our building won’t be able to keep up with our growth,” he said. “We’ll need more freezer space and storage. It might mean some expansion or possibly locating to a larger building if we take on more sizeable commercial accounts. And, of course, you’ll always need to be looking for more efficient and larger equipment.”