From Italy to Iowa

When Kathy and Herb Eckhouse started La Quercia, their cured pork processing business, in 2005, all they really had in mind at the time was producing prosciutto (Italian ham). It is made from the hind legs of pigs, and typically there are two types: prosciutto cotto, which is cooked, and prosciutto crudo, which is cured but uncooked.

In fact, when the company first got off the ground, the Eckhouses called it Prosciuttifio La Quercia. They later shortened the name to La Quercia, meaning “The Oak” in Italian, which is a typical symbol of the province of Parma, Italy, where Herb and Kathy lived for 3 ½ years, learning how to make dry cured pork. The acorns from the oak have been associated with the production of premium dry-cured ham for thousands of years. The oak tree is also the state tree of Iowa, where the entrepreneurs founded and operate La Quercia in Norwalk, not far from Des Moines.

“We started La Quercia (pronounced “La-Kwair-cha”) to create premium quality American prosciutto, then applied what we learned to other cuts of pork,” Herb said. But considering the couple – Herb, now 72, and Kathy “somewhat younger,” he said with a laugh – had no background in meat processing at all, this has been quite an accomplishment.

La Quercia is Herb’s fifth career, with more than 30 years in agriculture, but not meat processing.

“I was involved in raising seed potatoes, working cattle, and developing and marketing commodity crop and vegetable seeds including corn and soybeans primarily. That included five years on a potato farm in Idaho.

“Kathy’s background is working as a ranch hand and then as a researcher in agricultural economics at the University of California at Berkeley before becoming a homemaker and mother,” he said. “When we decided to try and do this, I was working for an American seed company, but we were living in Italy, where I was based for the company.” 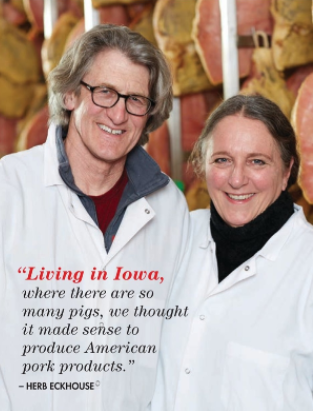 Before he and Kathy designed and built their prosciuttificio, they studied prosciutto and dry-cured pork products, spending five years researching, learning about, experimenting with, and making prosciutto at home.

“Thinking about the pros and cons, prosciutto made sense,” Herb said.

They love making prosciutto – “it is like assisting at a miracle,” he said. “Our appreciation for cured meats grew from the 3 ½ years we spent in Parma, where prosciutto got started. That’s where we saw where the careful treatment of fine materials resulted in an accessible, sublime and entirely regional cuisine. But then, our ambition to create our own prosciutto came from our desire to take the bounty that surrounds us in Iowa to its highest level, by offering unique dry-cured meats of the highest quality.

“We know that American food can compete in quality with anything Europe has. That’s when we decided we were going to make cured pork products.”

The couple has two grown daughters and a son, all of whom have their own careers, but who have pitched in over the years, supporting the business at the Fancy Food Show, handing out prosciutto samples in 45˚ F weather, mopping floors, and offering their opinions about the business.

La Quercia’s processing plant and business has grown. In 2009, they expanded the curing space.

“We do only pork and our plant totals about 30,000 square feet. All the meat we process comes from slaughter facilities in Iowa, all small- and medium-sized plants. We buy our material, the pork, right where the pigs are. Most of our pigs are raised within the same area or within 200 miles, mostly Iowa or Missouri. Living in Iowa, where there are so many pigs, we thought it made sense to produce American pork products.

“We also think it makes more sense to send cured, rather than raw meat, from Iowa to the East and West Coasts. So, we take our locally-produced meat, trim it, cure it – taking out most of the water weight – and ship it out. We use organic spices whenever possible, and we use sea salt that comes from the United States.”

La Quercia Cured Pork does a small amount of online retail sales, although that has been increasing due, in part they think, to the coronavirus. But a major part of their business has always been in both foodservice and retail supermarkets.

“When this pandemic started, a major part of our foodservice sales and business disappeared, because of what’s happened to the restaurant industry in this country,” Herb said. But in the last few weeks, the foodservice business has started to turn around. “We’ve gotten our first small orders from foodservice, like restaurants and hotels.”

And with the return of foodservice in the United States, with more restaurants doing takeout and curbside service combined with the movement toward more outside dining at restaurants, and an increasing amount of inside-restaurant dining, the Eckhouses are becoming more hopeful that their foodservice business will increase.

“We primarily sell to distributors – we have distribution partners across the country. These distributors service small groups of 10 to 20 stores, as well as individual specialty stores, where our products are very popular,” Herb said.

“Most of our meats have low perishability, because we reduce the water content,” Herb said.

When choosing the farmers to buy their meat from, the Eckhouses decided better meat makes better cured meat, and better meat is very dependent on human animal husbandry.

“So, we’ve developed protocols and standards for the animals in our farmers’ care,” Herb said. “Most of the pork comes from farmers whose animal raising is third-party audited. The protocols include no crates or cages, no animals from large animal confinement facilities. The pigs must have room to move around and to root in deep bedding. They cannot receive non-therapeutic antibiotics, hormones or synthetic hormones. Illnesses can be treated by farmers, but no antibiotics can be used to artificially promote growth. And the pigs cannot be fed animal byproducts.”

“We use heritage breed Tamworth pork to make Tamworth Smoked Pancetta and Tamworth Prosciutto, from Heritage Food Farm,” Herb said. “They raise their animals in pasture-based systems, using the hillsides of the Ozark Mountains. Russ Kremer raises the Acorn Tamworth hogs. For the last three or four months of their lives, these hogs forage freely in an oak and hickory forest. Sixty to 75% of their diet is acorn and hickory nuts.

“This gives Russ a sustainable way to use the wooded hillsides on his property,” Herb said.