This week MEAT+POULTRY recorded one of the stories from the August edition of the magazine. Listen to the Small Business Matters feature.

For most small meat processors who have ventured into off-premises catering, the COVID-19 pandemic hit like a ton of bricks. Cancellations were massive and unceasing across the industry.

For Hess Meats Inc., a 105-year-old country meat shop in Willow Street, Pa., catering had become the main sail that powered their small family business. Then in mid-March, the ship seemed to have fallen off the edge of the Earth when large gatherings were prohibited.

Third-generation operator Lloyd Hess bought out his brother Paul’s share of the business in 2016, and last year turned over 51% of the ownership to his own son, Eric.

“We were just getting into our booking peak for catering for weddings and I got 19 cancellations in one day,” Lloyd said. “We do about 75 weddings a year and many were able to be rescheduled for later in the year or even into next year, but it almost brought us to our knees.

“About a week later, I was sitting on the back porch thinking about what would happen to our business. We had no debt, but we had to think about our employees – could we keep them – and things like our insurance, medical programs and benefits. We did get a payroll protection payment, but my thought was, ‘where do we go from here?’

“Then the phone rang. It was a person I knew who asked if we could prepare 1,000 ready-to-go meals in a day. He was representing a non-profit which had obtained a state grant to prepare meals that could be donated to food banks. I told him we could do it and a few days later he asked if we could do 2,000 meals. Again, I said yes. Not long after, he wanted to know if we could make 5,000 meals a day. I answered that I didn’t know, but then the thought of adding a night crew kind of clinched the deal. I knew it was a long limb we would be climbing out onto, but we had to save our business and we would figure out a way to get it done.”

The Hess family’s business has earned a solid reputation as a small rural meat plant that served local Amish and Mennonite families with meats for canning, meats they smoked, and a solid custom deer processing trade. Diversifying into catering was deliberate and its product quality and reputation over the years earned it the opportunity to serve over 2,000 meals buffet style (99% of it catering) at corporate functions, sometimes more than 10 on a weekend. They did about 30 events per week. Lloyd says 10% of their catering contracts are for pick up.

In time, they landed contracts like the Pennsylvania Farm Show where they typically served 48,000 pork barbecue sandwiches in eight days.

Before signing the new food bank contract, there were food safety, storage and logistic problems that had to be considered.

“We had a HACCP program for our vacuum-packaging program, but now had to write others for every step in our meal preparation, packaging and storage,” Lloyd said. “There was a reward if we were able to do it right and the contract provided the proteins, vegetables, aluminum trays, boxes and pallets. It also provided a forklift and two semi-trailers that we could use for frozen storage.

“But it was the logistics in the supply chain that gave us pause. We would get 50,000 lbs of chicken frozen and there was a time factor in getting it thawed that we had to realize. Deliveries that were promised at 8 a.m. would arrive at 4 p.m. Some turkey came in from the Carolinas and some from Pennsylvania and both needed separate labels on the meal containers because one contained ascorbate.”

Hess Meats had to obtain a printer and develop their own labels for each meal. The non-profit contractor had specialists in California, Missouri and Florida who would guide their new sub-contractor, but it remained up to the Hess family to get it done.

There were hitches in the supply chain for obtaining pork, but chicken thighs, wings and smoked turkey breasts were provided. Beef supplies were promised but were late in coming.

To accommodate virus concerns, Hess Meats installed plastic shields between spaced out workstations, made mandatory use of face masks, gloves and aprons and totally sanitized work areas twice a day.

The meals are delivered in 3-lb aluminum pans and are designed to serve four people. They are shipped out 1,000 meals to a pallet. On some days, the company was able to prepare between 10,000 and 15,000 meals. The contract ran for five weeks, during which time Hess Meats was able to make over 119,000 meals.

“When they provided me with two semi-trailers for frozen storage, I thought I’d better have a back-up plan if something in the logistics didn’t go right. I brought in a third truck and I’m glad I did.” 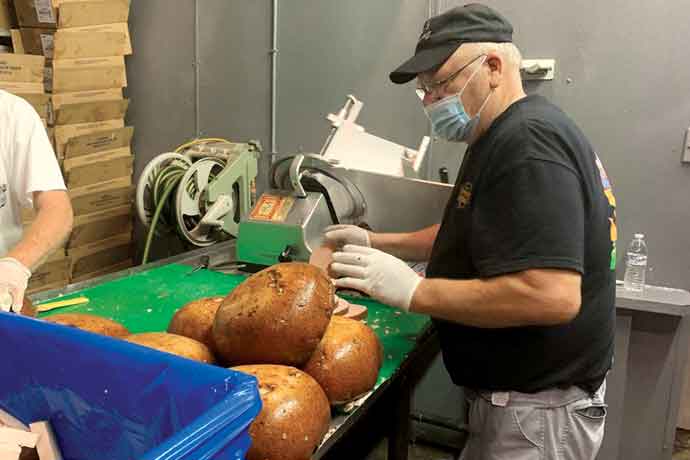 As for catering for 2020 graduations, those just didn’t happen. The company also lost its normal catering for 72 home games at the local Lancaster Barnstormers baseball games.

“In two weeks, we get into wedding season and I feel that those who booked with us will stick with us. A lot depends on what health officials will allow and recommend. Many of our corporate accounts we have catered for many years will be turning to us to learn what we may be able to offer. It is very unlikely that we’ll be able to serve up buffet ham or turkey dinners for hundreds or thousands.

“We’ve gone to disposable silver colored plastic silverware to save on labor. We are also looking at catering events not just on weekends but staggering them throughout the week to live within our working ability, and price them accordingly.

“I’ve been thinking about offering companies upgraded Christmas boxed lunches for their employees, or gift packages where they can choose from beef, pork, poultry or even seafood on a points basis, with some employees perhaps willing to pay a bit extra for what they perceive as something normally not available to them.”

Lloyd said that having a debt-free business, with cooling space, eight cookers, quality recipes, a reputation for dependability and a trusted workforce is helping keep Hess Meats up and running in tough times. He and Eric quickly realized people have not stopped eating – they know it’s just a matter of finding a format that works for both customer and company.