There’s no doubt that one of the highest priorities of food safety in the meat and poultry industry is the control of high-level pathogens like E. coli, Salmonella, Listeria and Campylobacter in poultry and meat products.

So, it’s not surprising that George A. Cavender, PhD, assistant professor of food science and technology at the University of Georgia, is heavily involved in research at the university to find the best way to get rid of E. coli in ground meat.

One area of research Cavender is looking into is whether high-pressure processing (HPP) technology can be used to rid ground meat of dangerous E. coli pathogens, including E. coli O157:H7 and the Shiga-toxin producing E. coli (STEC) pathogens that come from E. coli. STEC is bacteria that can cause severe foodborne disease. Primary sources of STEC outbreaks are raw or undercooked ground meat products, raw milk and fecal contamination of vegetables.

Cavender is concentrating his efforts on the possible use of HPP to control E. coli O157:H7 and its STEC variants in ground meats, including ground beef and ground pork. There is also interest in how HPP can be used to kill pathogens in ground turkey which is a popular ingredient in food products.

Some years ago, there was discussion about irradiating ground beef to control pathogens, especially E. coli. But as might be expected, there was consumer resistance to irradiating food due to perception, not science-based reasons. Remembering back to the experiences of women painting watch dials with radium in the 1920s, people didn’t like the idea of possibly putting radiation into their bodies via food.

“It’s not that the E. coli isn’t removed when high-pressure processing is used on ground beef, the problem is that the meat becomes discolored,” he said. “The ‘red bloom’ that consumers like to see on ground beef in grocery stores isn’t there. There seems to be an undesirable color change. It looks slightly cooked, as well as losing the red color.”

But there has been some success in research lately to limit the color change when HPP is tested on ground beef in the laboratory, a result that’s more pleasing to consumers.

“In one trial, we did some freezing of the ground beef with HPP,” Cavender explained. “After that freezing trial, the patties looked more acceptable to me. I’m thinking the ground beef after going through HPP may not be acceptable to consumers looking in meat cases in grocery stores. But they may be OK for foodservice customers.”

He said the process has been a bit more successful with pork, because consumers expect a lighter, less red color with pork.

Cavender has been doing research on the use of HPP to destroy pathogens in ground meat, including ground beef, for about four years, making many presentations at food-safety conferences. He gave a presentation updating progress he’s making last month at a meeting.

“HPP is effective on all major pathogens,” he noted. But it is not a process that can be carried out easily yet on ground beef. He thinks the first real application for treating ground beef with HPP will be “in the back of the house,” meaning foodservice and restaurants.

“That would be the safest place to do it, and a great starting point,” he said. “There was a company that did this years ago in foodservice, and it will be done again in the future. Foodservice operations shouldn’t be as concerned about the slight color variation of the meat post HPP, because restaurant customers aren’t going to see their hamburgers or meat loaf or whatever until it’s cooked. On the other hand, consumers are looking for a bright red bloom in a meat case when selecting their hamburger. Cost can also be a barrier. But I think there’ll be a major leap of faith from major foodservice providers to deal with the cost.” 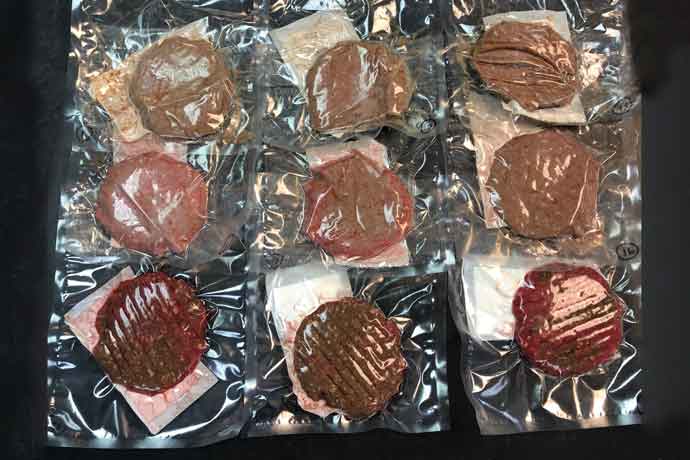 There are other possibilities.

“The food scientists, the researchers, will figure out how to retain the bright red bloom someday, and government regulatory agencies may require it to be done if illness continues to increase,” Cook said. “Or government regulations may come out requiring it to be done. And there’s also the advantage of the shelf life being doubled.”

Cook thinks HPP will be used in processing more ground meats in the future.

Gary Sullivan, PhD, associate professor of meat science at the University of Nebraska-Lincoln (UNL), agrees with Cavender that using HPP technology to eliminate serious pathogens from ground beef, especially E. coli O157:H7 and STEC, causes discoloration in the “red bloom” of raw ground beef that can be off-putting to consumers.

Sullivan and Cavender worked together on research while Cavender was teaching at UNL before going to the University of Georgia. Two years ago, along with other researchers, they published articles about the effect of differing ingredients and packaging technologies on the color of high-pressure processed ground beef in the Journal of Food Quality; and the effect of different myoglobin (the iron-containing protein that gives meat its color) states on color changes in HPP-treated raw ground beef in LWT – Food Science and Technology.

Sullivan said using the pressure to provide bacterial protection results in a slightly “cooked” appearance in the product.

“There is a lightening – it’s more pinkish,” he said. “It’s almost like when you put ground beef in a microwave to defrost, but it’s not fully cooked, but what it looks like when it first starts to cook.”

He agrees the major problem is on the retail side of ground beef sales, because it changes the color consumers expect to see in products they perceive to be fresh.

He notes it’s not as obvious in other ground meat products.

“Ground turkey, for example, is a much lighter product, so it’s not as noticeable,” he said.

There’s also no doubt that companies making high-pressure processing equipment are interested in this issue, because of the use of the technology in reducing or eliminating E. coli and other pathogens in ground meat.

“There are great opportunities here, using a non-thermal process, if the color change of raw ground beef can be minimized,” Sullivan said. “There’s also an economic factor that’s part of the consideration, reducing risk to people and foodborne illness would need to be sufficient enough to justify the cost of the process.”

There is a zero tolerance for E. coli O157:H7 and STECs in raw ground beef and E. coli could be destroyed by using this process.

There also has been speculation that if HPP can be used to eliminate pathogens in ground beef, the product could be made “ready-to-eat.” But Sullivan seems skeptical about this aspect. People could get the idea that all ground beef is safe to eat raw or rare, whether it goes through HPP or not.