The US Dept. of Agriculture (USDA) and its partners have ramped up efforts to keep African Swine Fever (ASF), a swine disease that could devastate the US pork industry, from entering the country since China’s first notice of detection in October 2018. On-farm biosecurity awareness and vigilance by all the stakeholders in the industry have been vital to successfully keeping the disease at bay thus far. Programs to prevent the spread of ASF also include implementing protocols with trading partners and establishing safeguards at US shipping ports and airports. An essential component in this effort is the work of a team known as the Beagle Brigade.

These beagles and beagle mixes search with their handlers for prohibited agricultural products (that can carry foreign pests and diseases) at major US ports of entry, including airports and land border crossings as well as in mail and cargo facilities.

Detector dogs, like those that make up the Beagle Brigade, are trained by the USDA’s National Detector Dog Training Center in Newnan, Georgia, which falls under the department’s Animal and Plant Health Inspection Service’s (APHIS) Plant Protection and Quarantine program. These dogs are then used by the Dept. of Homeland Security’s US Customs and Border Protection (CBP).

The spread of ASF abroad has led Beagle Brigade teams to increase their focus on high-risk entry points.

“African Swine Fever is a devastating, deadly disease affecting all kinds of pigs, both domestic and wild – and keeping our pork industry safe is a top priority,” said Secretary of Agriculture Sonny Perdue in a news release last year. “Recently, our collaboration with CBP proved successful when a USDA-trained detector dog intercepted a roasted pig head in traveler baggage from Ecuador,” Perdue said. “The quick work of a beagle and the CBP staff prevented a potential animal health issue and further highlighted the need to be vigilant in safeguarding the US against foreign animal diseases.”

The USDA adds that it’s committed to working closely with the swine industry and producers to ensure strict biosecurity procedures are in place and being followed on all swine farms. Since the outbreak in China, additional surveillance in the US has included training and adding 600 inspection officials to monitor ports and inspect shipping containers at entry points in the US. An additional 60 disease-detecting beagles have also been trained and added to the system.

Currently, there are about 120 handler-dog canine teams in 88 airports across the United States that were trained at the USDA’s National Detector Dog Training Center (NDDTC), Hayden says.

About 90 percent of dogs trained at the center are obtained from rescue shelters.

“The NDDTC seeks high-energy dogs with high food drive between the ages of 1 and 3 years old,” she says. “NDDTC training and recruiting specialists have found that many dogs in that age group are in shelters due to this high energy that doesn’t suit a home setting. When canines become detector dogs, they are essentially playing a ‘hide-and-go-seek’ game throughout the day. The NDDTC training specialists give the surrendered or abandoned canines a way to refocus that energy. They spend it seeking out potentially harmful agricultural pests.”

Because of their non-intimidating size and appearance, the beagles of the Beagle Brigade are primarily used by CBP in airports, where the animals and handlers will interact with people.

Airports are chosen based on the amount and types of potential risks the hub faces.

As for the training these beagles receive at the NDDTC, Hayden says dogs that are food-motivated learn to associate a reward (treat) with the specific odor they are expected to find.

“We use positive reinforcement to train the dogs to detect and signal if they find items of agricultural concern (for example, fruit, pork or beef) in suitcases, vehicles and cargo packages,” she says.

To start, the training challenges are simple, so it’s easy for the dog to be successful.

“With that confidence boost, the NDDTC training specialists gradually increase the difficulty and complexity of the training until the dog can detect the target odors in an actual inspection environment,” Hayden adds.

The NDDTC training programs last up to 13 weeks and offer a chance for a detector dog and handler to bond and gain mutual confidence and trust.

“Through daily training, dogs and their handlers develop a close relationship – to the point that the handler is aware of even slight changes in the dog’s behavior,” she says. “Enrichment opportunities, such as play time at the NDDTC’s on-site agility center, further ensure the detector dog’s well-being.”

A successful detector dog can have a career that spans six to eight years, or up to the mandatory retirement age of nine.

“Upon retirement, some dogs live with their last handler as a personal pet,” Hayden says. “Otherwise, the NDDTC will offer the dog for adoption. In addition, some dogs do not meet our training requirements but would still make wonderful pets. We offer those dogs for adoption as well.” 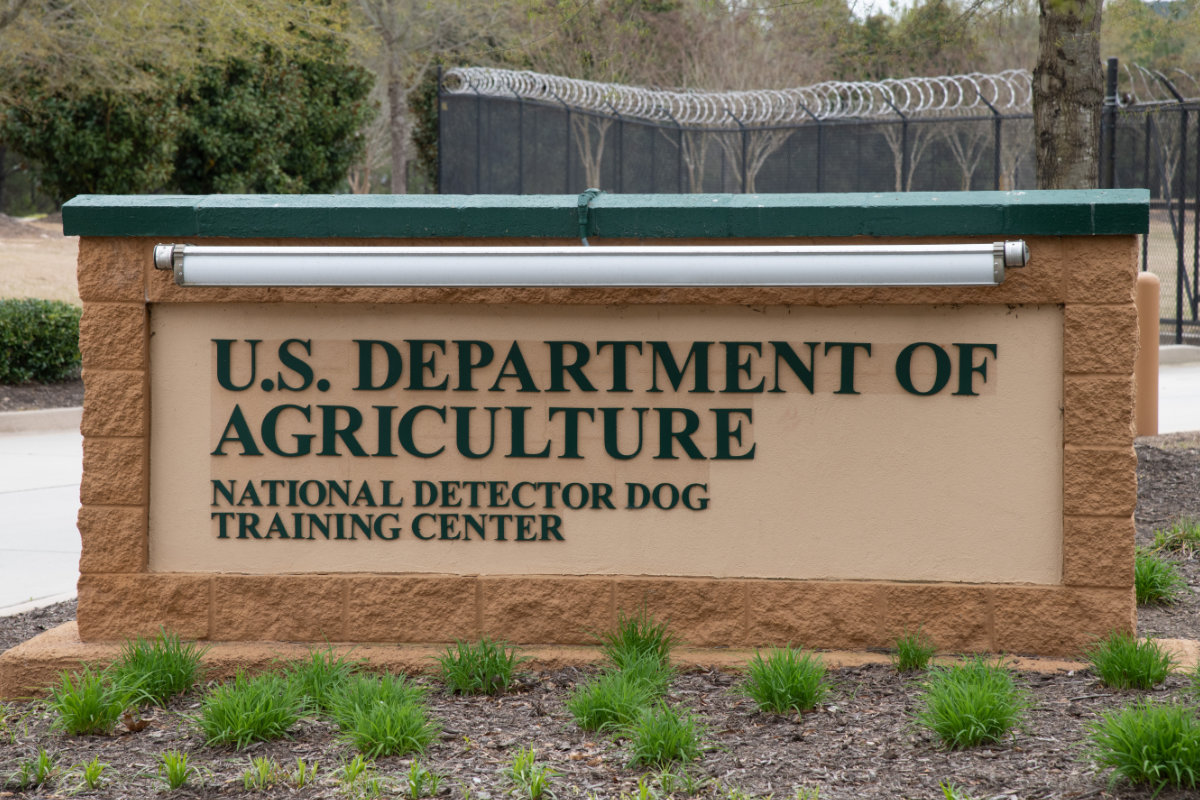 Hayden says there’s been a notable increase in the number of countries in Asia reporting ASF since China first detected cases last year.

In 2019, there have been more than 520 individual detections of ASF in China and nine additional newly infected Asian countries: Mongolia, North Korea, South Korea, Laos, Vietnam, Cambodia, Myanmar, Philippines and Timor-Leste, she says.

Additionally, on the Asian side of Russia, along the northwestern border of China, there were newly reported ASF detections in domestic pigs and wild boar from July through October.