The Fisher family is now in the third generation operating its Portland, Indiana, meat business. It has transformed as the industry has changed. But in 2016, when a devastating fire threatened to shut down the entire family tradition of putting meat on their customers’ tables, another change loomed.

Greg Fisher, the company president and co-owner of Fisher Meats, along with his three brothers, says the Indiana company has roots dating back not only to his great-grandfather’s meat business in western Ohio, but his great-great-grandfather, who hung his shingle in a small village prior to him.

On May 1, 1945, upon returning from World War II, their grandfather decided to open a custom slaughter plant in Portland, specializing in fresh, smoked and frozen meats, he explains. “It was a family operation then and it has continued that way until this day.”

Fisher, now 41, with a food science degree from Purdue Univ., says the family ran the Portland facility and a retail shop in nearby Muncie. It was a sausage kitchen fire that destroyed about a third of the main plant and left the Fishers with only an off-site freezer of meat left to sell.

“We were really stuck, and a handful of Indiana processors stepped up and supplied us with meats to continue operations, including curing and smoking custom meats, as we were still able to slaughter,” he recalls. “To say they saved our bacon is a pretty accurate statement. At one point, we had even contemplated moving back to Ohio.

“Prior to the fire we were considering expansion and had been weighing the options of either building or relocating. Once we had the fire, we knew we had to relocate to get open as soon as possible. Amazingly, not long after our fire, a food processing facility in Redkey, Indiana, about 15 miles from Portland, went up for sale. It was practically new, built in 2009, 26,000 sq. ft. and a former fish processing plant. We were pretty sure we would go ahead with that purchase.

“We closed on the plant Oct. 12th of that year and were ready to move in by Nov. 7th. It already had refrigeration, coolers, drains and many of the basics we needed,” Fisher says. “After some additional renovation and equipment purchases, we now have a state-of-the-art sausage kitchen with a vacuum bowl chopper, automated stuffing and linking line. With this new capability we started working with other companies to co-pack their product or work with them to develop a tasty product that meets their specifications.” 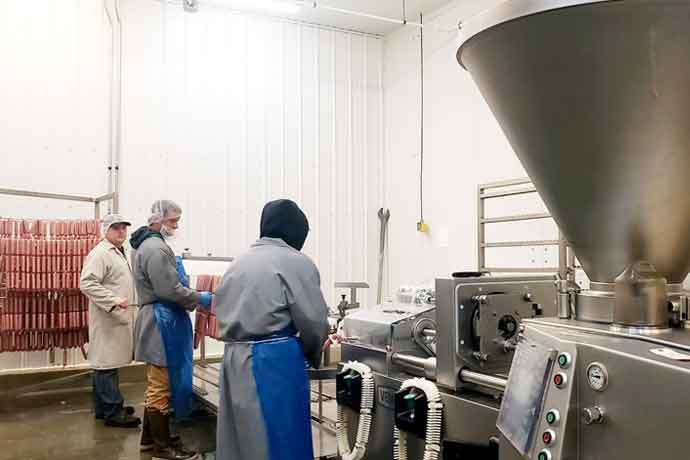 So well-known and trusted is Fisher Meats’ reputation that they have grown immensely in private labeling for other processors from North Carolina to Hawaii. They have expanded into 10 states with their branded items.

Their specialty products like hams, bacons, franks, loaves and sausages have garnered state, national and international awards in head-to-head competition with top performers, and the company now makes approximately 120 different meat items, both under their brand and private label. Most branded items are listed on their website, fishermeats.com.

The renovation and rebuilding at the Portland location is ongoing. Almost 4,500 sq. ft. of the 18,000 had been destroyed. The reconstruction and modernization, where they are adding rail space for an additional 75 head of cattle, should be completed by the end of this year. In custom processing for livestock owners, the company has a reach that draws customers from as far away as Ohio. Not only did Fisher Meats continue to operate through this difficult time, but the family has seen their workforce grow from 33 to 48 employees.

“These last couple of years have been full of uncertainty and many changes,” Fisher notes. “We are now pursuing SQF certification. We would not have been able to do any of this without the high-quality individuals who come to work every day and perform as a team. It is a true testament to their work ethic and dedication,” he says.

His parents John and Janice, from whom the brothers bought the business, still come in almost daily, making sure that the family tradition of quality and service are followed. His brother Michael is the company chief financial officer and runs the Muncie retail location. Another brother, Brad, manages the Portland plant. Brother Dan is the major domo at the Redkey, Indiana, facility. Fisher’s wife Jill and Brad’s wife Brittany oversee the company bookkeeping, customer service and social media activities.

Fisher says getting industry help when it was needed was vital. He attributes many of those contacts to his many years of service (about 17), including two terms as president of the Indiana Meat Packers and Processors Association, and his recent three-year stint as a director for the American Association of Meat Processors.

“The members of the associations share so much information with one another,” he adds. “That’s helped us as well to know what our counterparts are doing. It also tells us what’s working, or maybe more importantly, what’s not working.”

When queried about any difficulties in managing three separate locations in a family business, Fisher is quick to point out that “although we talk daily, each of us knows our job and responsibilities. We are there to help each other because we all know our mission and have the same goals in mind. We’re all very passionate about it. And if a problem should arise, I remind them my title is B-O-B, ‘Boss of Brothers.’”