Hamburger Hop, an annual event that takes place in Chicago the night before the “Bon Appétit presents Chicago Gourmet weekend,” took place on Sept. 27. Fifteen Chicagoland chefs competed in this tasting frenzy hosted by Buckhead Meat of Chicago, which supplied the beef for the competition, and Blue Moon Brewing Company.

At the 10th installment of the event under a big tent near Chicago’s Millennial Park, the chefs grilled, assembled and served their creations, showcasing how easy it is to bring excitement to one of America’s favorite foods. It all starts with the beef. The majority used either Certified Angus Beef (CAB) or “1946,” Buckhead’s proprietary blend of CAB chuck, brisket and short rib.

Chef Kevin Cuddihee of Porter Kitchen & Deck took home the Judges’ Award and the People’s Choice Award for Chicago’s Best Burger, making him only the second chef in Chicago Gourmet history to take home both titles. His winning recipe was the Hawaiian Truffle. He served CAB prime burger with Alpha Morning Sun truffle cheese, porcini aioli and bordelaise onions on a Hawaiian bun. 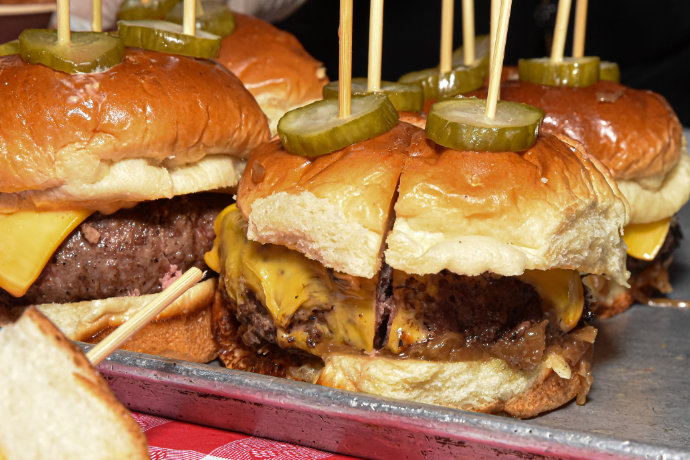 Here’s the other 14 creations to provide you some innovation inspiration. Many of the chefs tied in Chicago themes and flavor combinations. But in the end, flavor was all that mattered.