Carving out her niche

She could have been a rocket scientist. In fact, she started college with that career path in her sights. But instead, Tanya Cauthen followed her special affinity for meat. After a long journey that took her all over the world, she now owns Belmont Butchery in the heart of Richmond, Virginia’s Museum District. Cauthen’s love affair with meat started early.

Her father was a naval officer, and when he took the family out to eat at the Officers’ Club, Cauthen – then a kindergartner – would ask for, “More meat! Red, please.” It took her a while to train the guys at the carving station where they were slicing a hanging haunch of beef. They eventually learned to pile her plate with the rare stuff instead of giving her the more well-done pieces. So, her persistence paid off then, as it has now.

Cauthen’s childhood was marked by travel, and it influenced her deeply. Her father’s career (and the fact that her mother is British) took the family to many nations and exposed her to numerous foods, cooking styles and cultures. She tried everything. She was naturally curious and an adventurous cook, willing to try even complicated dishes as a youngster just to see if she could pull them off. She usually did. But she never thought of cooking or being a butcher as a career option. Ever practical, Cauthen chose to major in aerospace engineering at the Univ. of Virginia. But the pull of cooking was strong, and she took a semester off from her studies as a Cavalier. She landed a journeyman chef’s position in Bern, Switzerland. The eatery had its own in-house butcher shop. “There were Germans working in the butcher department,” she recalls. “They didn’t speak English and I didn’t know German. Luckily, cleavers have no language barrier. I was learning culinary arts but knew that meats were the centerpiece of most meals.”

Even after her stint in Switzerland, Cauthen kept learning and traveling. At the age of 22 she landed back in Virginia and she opened a catering business, Capers Catering Inc., with her sister, Karen Cauthen Ellsworth. They ran that venture together for three years. Cauthen went on to work as a restaurant chef, catering chef, culinary instructor, consultant and freelance food writer.

“Many years later,” she says, “I was on a ‘walkabout’ trip to Australia where I spent some time helping in a butcher shop in Melbourne. That’s when I heard that Julia Child had died. I was crushed. Julia Child is my culinary hero.” After returning home a few months later, Cauthen was working as a freelance chef and food writer, when she had an epiphany. “I was past deadline on an article and had the Food Network on in the background. I heard Alton Brown advise viewers to ‘ask their local butcher’... That was a light-bulb moment for me. Richmond needed a local butcher, and I wanted to be Richmond’s butcher.”

Before ‘local’ was cool 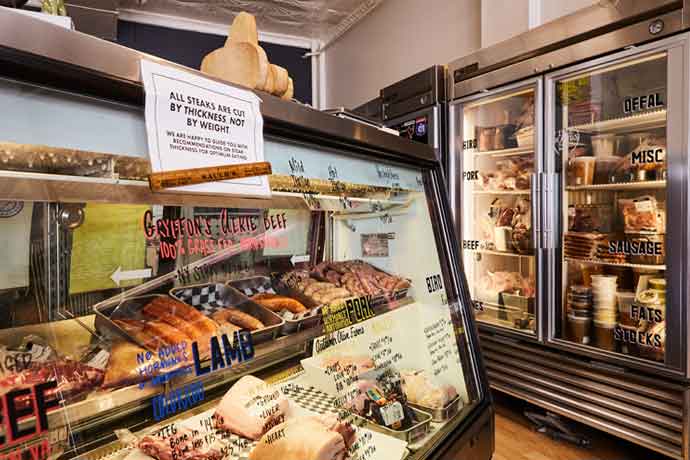 Inspired, Cauthen wrote her own business plan and leased a 700-sq.-ft. shop with a European-style storefront on North Belmont Street in Richmond. Six months later in October of 2006, she opened Belmont Butchery. During the construction, her sister gave her a copy of Julia Child’s memoir My Life in France, for her birthday. It was a huge inspiration. “Child was a war hero who learned to cook at the age of 37 and went on to become a culinary icon. I had just turned 37 myself,” Cauthen explains. “I figured all I wanted to do was to open a little butcher shop.”

Starting with an 8-ft. raw meat display case and a 4-ft. case for charcuterie items, her wares now include about 70 percent locally sourced meats. “When Belmont Butchery opened, 13 years ago, ‘local’ wasn’t a thing. We started with restaurant quality meats and evolved from there.” She believes firmly in being a nose-to-tail meat provisioner, leaving little waste but educating customers rather than limiting them to only local options. Belmont Butchery prides itself on having the best local meat options, but maintains a line of non-local, humanely raised meats with no added hormones or antibiotics as more budget friendly options. Cauthen explains that “in the beginning, farmers and processors weren’t really sure of the regulations pertaining to selling to a retail shop. Complicate that with being a female butcher; local abattoirs were very confused.”

“I want to sell everyone something,” Cauthen explains. “But I need to have some understanding of what they really need or want. If they want grass-fed meats, I go to my role as an educator and let them know the difference in taste, texture and cooking. If they want four slices of bacon or one sausage link, that’s what I sell them. I don’t try to up-sell anyone, but rather navigate options with our customers so that they feel great about their choices and comfortable with cooking them.” At the end of the day, Belmont Butchery is about selling meat.

“We don’t want customers just browsing aimlessly or feeling overwhelmed. We want them informed and making buying judgments based on what they value and good choices. That is the same philosophy I have about our employees (five full-time and two part-time). They get to go out to our farm-partners and meet the animals while alive. Seeing how they are reared and nurtured can’t help but give you a respect for that life. I want them to have the same respect that I do for that life. If the animals are going to nourish us, we owe it to them not to waste anything. The animals deserve that.”

In addition to Belmont Butchery’s local meat options (including beef, veal, lamb, pork, yak and chicken, among others) they also procure some more exotic options, like kangaroo, ostrich or wild boar. Whether it’s fresh meat, charcuterie or hand-worked items, the variety at Belmont Butchery’s goes beyond expectations: tomahawk ribeyes, Serrano Spanish ham, Iberico ham, speck, linguisa, head cheese, scrapple, pork belly sausage, chorizo, paté maison, soppressata, and even duck confit (legs). All of these are complemented by a few provisions like crackers, rubs, cheeses and olive oils. Details on specialty products for the week and holiday promotions appear on the shop’s website, www.belmontbutchery.com and on social media. 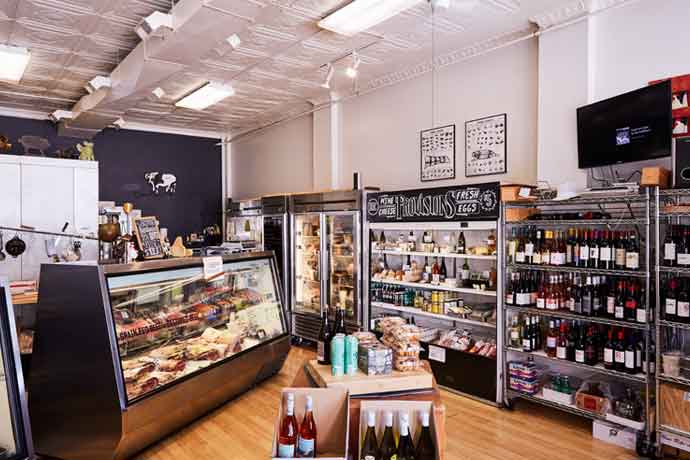 Cauthen’s world travel has influenced what she makes and sells. Indeed, the flavors of Europe, Asia and Africa (among others) grace the diminutive shop. The location offers a great selection of wines and beers, all chosen to pair well with Belmont’s meats and cheeses. Cauthen’s husband, Henry Reidy, used to operate a nearby wine shop. One day, Henry (then a customer) introduced himself. They have been married for nine years.

“We felt that running two separate small businesses was too much of a challenge, so Henry sold his shop and now serves as Belmont’s wine buyer and customer service manager,” Cauthen explains. “He comes in to the run the shop in the mornings and I come in for the afternoons and we can still spend time together and have a life.”

They live in Montpelier, Virginia, outside of Richmond, on Reidy’s Pond Farm. There, Cauthen raises Boer goats, Hog Island sheep, guinea hens, chickens and geese. Her first farm animals were gifts from several of her farm-partners. Farming seems to come naturally to Cauthen. “Working with my animals gives me such a greater understanding of what farmers do and the difficulties they face on a daily basis. I now understand nutrition, genetics, breeding and all the cycles of life in a way I never truly knew before,” she explains. “Now, I can explain nuances of rearing methods and nutritional needs of the animals to my customers in a way that most butchers can’t. I experience all the ups and downs of rearing livestock without my livelihood depending on it.”

Shortly after opening Belmont Butchery in 2006, Cauthen was recognized by Food & Wine, honoring her with the title of “Maverick Butcher” and news of her success in house-made sausages and artisanal meats soon spread and appeared in the pages of Saveur and Bon Appétit. This foodie-before-foodie-was-cool has rewarded her loyal followers by writing columns and sharing cooking tips and recipes. She is also a sought-after instructor for classes in cooking and meat processing, including programs like Sausage 101 and North Carolina’s Niche Meat Conference. Cauthen has been lauded as a pioneer in her field, called a “meat monger,” and had her shop honored as “a culinary clearing house.” Her reputation is well-earned. More recently, in 2017, Cauthen appeared on an indoor grilling episode of The Food Network’s “Chopped.” And yes, she won.

Describing her approach to customer service, Cauthen says, “I’m kind of like a meat bartender. It’s like ordering a martini at a good bar. When a customer comes in and wants a steak, I need to ask what they value, taste, texture, tenderness, fat as well as doneness – once I’ve done all that, I do my best to offer them something they will appreciate.”

Ever the teacher, Cauthen says, “I genuinely want to make people appreciate meat the way I do,” she explains. “I didn’t invent the word ‘charcuterie,’ but I think I’ve helped people in our community understand what it is. I want people to be comfortable coming in to ask questions, and I think they are.”

As for the future, between the shop, the farm and her family, Cauthen says she is content with what she has built.

“I don’t really see the business getting bigger physically, I just want us to get better every day,” Cauthen explains. “My mission when I started was to feed Richmond well – whatever well means to you. That hasn’t changed in 13 years, and I still want to feed Richmond well through eating, cooking, demonstrations and classes. That’s what is so great about working with food – it’s ever changing. We have a chance to learn, teach and experiment every single day.”