“It’s the only job I’ve ever had,” says Daron Mosley, who recalls standing on wooden crates at 11 years of age to cut meat. The operator of two high-end meat markets in Mobile and Daphne, Alabama, he reflects on the changes that have brought this family-owned business through 40 years of change.

He recalls how his father Joe went to work in a nearby general store called Cady’s Meat Market in 1961 and learned meat cutting so well that in 1974, Joe and his wife, Rose, bought the store and she came on board to help him operate it.

Together they ran the midtown shop and in 1979 opened a new facility now known as Mosley’s Meats on Airport Boulevard. With sons Joey and Daron working with them, the family added a second location in Daphne on the Eastern Shore of Mobile Bay in 2001.

Both locations sparkle with freshness, personalized service and prime meats from Omaha. Their stock and trade are hand-cut steaks. Walking into the shop gives one the impression of entering a fine dining chamber, flanked by rows of wines of all vintages.

To complement their meat business, both butcher shops serve as sales outlets for both The Green Egg and Primo brands of ceramic smokers and a vast array of charcoal and smoking pellets that impart the exact flavor any discerning shopper might seek. And as one might suspect, no specialty butcher who takes pride in himself would be without his steak and meat rub. While the rub recipe is a family secret, remember you are in pecan country.

Now in the third generation, David and Jacob (Joey’s sons) and Christopher (Daron’s son) ply the trade with knives, saws and cleavers but retain that innate Mosley tradition of friendly and personalized service.

Daron explains that over the years the family has produced many other products like Italian sausage and kielbasa, but since the area is a seafood mecca it doesn’t justify the production of such items in a large volume.

“Here we are known for our prime steaks and roasts and our customer base knows that this is the place to come for that special and consistent custom cut of meat,” he adds.

At the Daphne location, named Mosley’s Fine Meats, even a billboard couldn’t hold a promotional candle to the colorfully adorned trailer that shows off their steaks and wines in a fashion that makes the mouth water and the appetite seek out the high notes in carnivore dream foods.

Running two shops perhaps a half-hour drive time apart hasn’t been the logistical nightmare some might imagine. Both locations are very much self-sufficient. However, Daron responds when asked if there are any problems:

“Yes. Sometimes there are problems. It’s called ‘family.’ Every one of us cares enough to second-guess the others. That makes it likely that sometimes we are on different routes...but we all intend to get to the same place in pleasing our customers.”

Christopher echoed the same sentiment when asked about coming in for an interview on a Saturday. “That’s a really busy time when you have a family business and not one of us can afford to let the others down,” he mentions in words that truly reflect the Mosley family pantheon of service.

The Daphne location was redesigned from its former status as a golf pro shop. And speaking of sportsmen, the Mosleys take in between 500 and 700 deer for processing each year. They handle only boneless venison and operate under a county inspection program.

The Mobile store features 7,000 sq. ft. and operates with six employees and the Daphne location engages another six workers and provides 5,000 sq. ft. of space.

To me, it is not only important, but also vital, to have employees and service personnel who are ambitious. Daron Mosley, Mosely’s Fine Meats

Daron indicates that the family makes a big deal out of fundraising events for local groups like baseball and softball teams, and other non-profit entities.

“We can offer them fresh or cooked Boston butts or shoulders at a very reasonable price that lets them maximize their potential for profits. Others can give them the same thing, but with our ability to create volume on a custom basis for these groups, we can let them earn more per sale on almost every fundraising project.”

Daron is a bit confused by and concerned about the future generations of consumers. Daron says many don’t cook, some don’t know how and others don’t have time. He admits that he’s been fortunate to have a solid base of customers who appreciate prime meats and take pride in cooking it themselves. The shops do some lamb but still bank on their beef trade the heaviest.

“We might be looking at more of a prepared entree or meal format in the future to meet the ‘no time to cook’ attitude of those who have grown up without or moved away from the traditional family meal format in their lives,” he suggests. “We’re looking for ideas.”

Yet one thing he knows he’s never planning to change is the degree of service his family business offers. 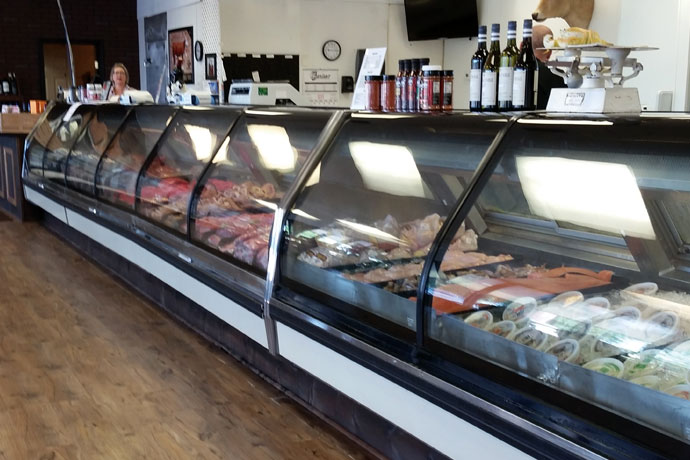 “To me, it is not only important, but also vital, to have employees and service personnel who are ambitious,” Daron, who is a robust 55, points out. “We like to train them ourselves and we can find out quickly if they understand and share our values.”

Beyond the meat cutting, the Mosley family offers their own smoked hams, pulled pork, baby back ribs and spareribs. Holidays like Thanksgiving feature Bates free-range, organic and fresh turkeys or items like whole beef tenderloins.

Since a nearby food store in the area sells seafood, the Mosley clan brings out its own versions of stuffed jalapeños, crab or crawfish stuffed mushrooms, crab cakes and crawfish taters.

The family makes it known that one of its strong suits is cooking in volume and heavily promotes that fact on its website mosleysmeats.com.