We use cookies to provide you with a better experience. By continuing to browse the site you are agreeing to our use of cookies in accordance with our Cookie Policy.
Home » Starbucks details US expansion plans

SEATTLE — Starbucks Corp. will focus on new store openings in middle America and the South to expand geographically in the United States. Expansions in US menus will come through beverage innovation.

“Our US real estate strategy will be driven by placing the majority of our new stores throughout middle America and the South, with careful consideration of the format type,” said Rosalind G. Brewer, chief operating officer and group president of Americas, in a July 26 call to discuss second-quarter earnings. “More than 80 percent of stores built in the next few years will be drive-through as data (indicate) significant opportunities for store expansion in higher-growth, lower-cost markets, especially when considering rising wages and occupancy costs.”

Starbucks will place fewer units in Seattle and Manhattan, although the company is encouraged by the business in the two metro areas, Brewer said.

“But at the same time, they’re highly dense areas with increased occupancy cost and increased labor spend in those areas,” she said.

Turning to the Starbucks menu, beverage innovation is coming in various platforms.

“While not yet enough to offset declines in Frappuccino sales, we see substantial accretive growth from draft, refreshers, tea and cold brew platforms,” Brewer said. “In general, consumer demand for cold beverages has grown from 37 percent of sales five years ago to more than 50 percent of sales today. There is also strong demand for customization, including blonde espresso as an alternative to our bolder signature roast and plant-based milk and cold foam for our cold coffee and tea beverages.” 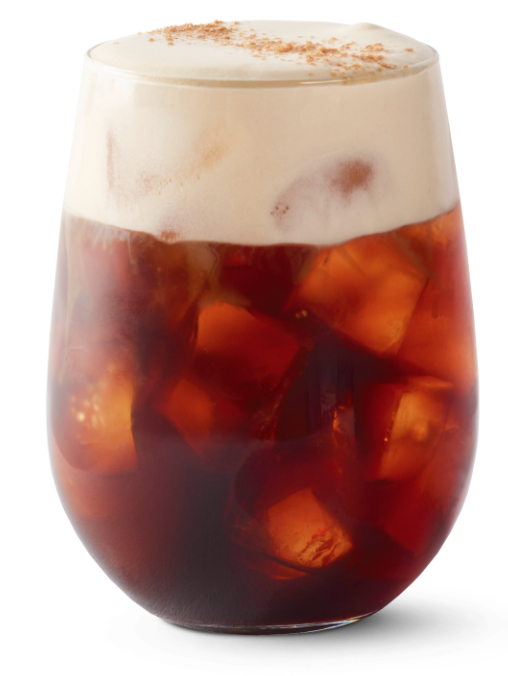 She shared examples of beverage innovation.

“Cold foam is a cold froth skim milk designed to be a perfect creamy finish to our cold beverages,” Brewer said. “Launched this spring, we are just beginning to explore some of the opportunities here as evidenced by our latest offering, the salted cream cold foam cold brew. Draft allows us to extend beyond cold brew and has proven highly incremental, especially for occasional afternoon customers. We’re accelerating this platform to more than 2,800 stores by the close of fiscal year ‘18, up to more than 6,000 stores by year-end fiscal year ‘19.”

Starbucks also is exploring multi-tap systems to add customization and innovation across tea and milk, she said.

In its Americas region, Starbucks opened 180 net new stores in the third quarter while comparable store sales growth was 1 percent. Operating income of $908.7 million was down 7 percent from $974.8 million in the previous year’s third quarter. Revenues climbed 6 percent to $4,230.6 million from $3,991.9 million. The Starbucks Rewards loyalty program added 1.9 million active members in the United States. Total member spend now represents 40 percent of US company-operated stores. Mobile order and pay represented 13 percent of US company-owned transactions in the third quarter.

Companywide in the third quarter, net earnings attributable to Starbucks of $852.5 million, or $0.61 per share on the common stock, were up 23 percent from $691.6 million, or $0.47 per share, in the previous year’s third quarter. Consolidated net revenues grew 11 percent to $6,310.3 million from $5,661.5 million, primarily driven by incremental revenues from the impact of ownership change in east China, incremental revenues from 2,015 net new Starbucks store openings over the past 12 months, favorable foreign currency translation and 1 percent growth in comparable store sales.

“While we fell short of the expectations we had entering the quarter, we’ve made measurable progress against two commitments we’ve made to our shareholders: to deliver predictable, sustainable growth at scale and to create meaningful increases in shareholder value long into the future,” said Kevin R. Johnson, CEO and president.

Starbucks has entered a global coffee alliance with Nestle S.A., Vevey, Switzerland, in which Nestle will obtain the rights to market, sell and distribute Starbucks, Seattle’s Best Coffee, Starbucks Reserve, Teavana, Starbucks Via and Torrrefazione Italian packaged coffee and tea in all global at-home and away-from-home channels.

“We anticipate that the Nestle transaction could close as early as the end of August, which would result in a dilutive EPS impact of $0.02 to $0.03 in FY '18,” said Scott H. Maw, executive vice-president and chief financial officer. “I would remind you that we expect revenue and EPS to be negatively impacted in 2019 by two to three points each as a result of this transaction, with the range around the final number driven primarily by the potential accounting treatment for the $7.2 billion upfront payment.”

Starbucks in the third quarter closed more than 8,000 company-owned stores and its corporate offices in the United States on May 29 to conduct racial-bias training. The closures for training had a $0.02 impact on EPS, Johnson said.