We use cookies to provide you with a better experience. By continuing to browse the site you are agreeing to our use of cookies in accordance with our Cookie Policy.
Home » Hill country hallmark

In the town of Boerne, Texas, about 20 miles northwest of San Antonio, Colton Sells and Clayton Klein, co-owners of Klein Smokehaus, have a reputation for quality meats and cleanliness that they refer to as ‘Pure Texas German.’

Don’t be fooled by the fact that the business partners took over a seven-decade-old meat processing business just over a year ago. They are on the cutting edge of using top-shelf craftsmanship and understanding the wants and wishes of their Hill Country clientele to assure that they’ll be around for generations to come.

The business was established as a grocery store in 1950 by the Waldeck family. By 1976, population sprawl from the San Antonio area brought chain supermarkets to their town and it was downsized to a custom and retail meat shop under the banner of Farmers Meat Market.

Fast forward to 2006 when a Hill Country native named Barret Klein bought the facility and used his expertise as a Texas A&M University animal science graduate, a meat science master’s degree holder from Colorado State University, and industry experience to bring new ideas to the meat shop in Boerne.

The emphasis was on smoked meats and German-style dried sausages, but the guiding light was that the shop always harked back to a simpler time when a meat shop owner knew every customer by their name and face.

Clayton Klein, youngest son of Barret and his wife Claire, grew up in the business, or quite literally in the meat locker. From a young age he spent after-school hours and weekends hanging, skinning, grinding and packaging deer. Following graduation from Boerne High School, he pursued a baseball career at Seminole State and Galveston College. He later moved on to Texas A&M and earned a bachelor’s degree in construction science. Still, he found that the knife handle was a better fit for him than the hammer and returned to his roots at Klein Smokehaus. It seems he had a passion for smoking meats and being around hunters.

In May of 2021, Barret sold the business to his son Clayton, now 25, and Colton Sells, 37. Colton, also a Texas A&M animal science graduate with an emphasis in meat science, had worked for years at some noteworthy companies including Texas Meat Purveyors, J Bar B Foods, Harris Ranch Beef and Hudson Sausage. He also worked with the Klein family for several years where he garnered more experience and diversity in meat processing. He returned to Texas Hill Country with a dream of being involved in a meat business with a family. Now, with his wife Beth and three children, his vision and wishes are much closer to reality. Those future young deer helpers will soon be making their appearance on the full service and quality meat processing stage.

The 10,000-square-foot facility operates under state retail and custom inspection and produces about 40 of its own unique specialties like cold-smoked dry German sausages, brats, link sausage (regular and Jalapeno and cheese), summer sausage, ring sausage and pan sausage.

In Texas, if you say you are big in something you better be able to back it up. Using the abundance of oak trees that flourish in the Hill Country, Klein Smokehaus offers brisket, smoked turkey, chopped ground beef wrapped in bacon and pulled pork.

Then there’s this little thing in Texas called game processing and few companies have a reputation for serving and satisfying more hunters than Klein Smokehaus.

“We do as many as 5,000 big game animals a year,” Klein continued. “They love our specialty items like steaks and chops, dry sausages, burger grinds, stew meats, chili and fajita meats, snack sticks, peppered jerky and more.

“We take in mule deer, white tail deer, wild hogs, antelope, elk and axis (an exotic six-point spotted deer) that is abundant in the Texas Hill Country. We also buy inspected exotic game meats and sell or further process them into value added products for our customers.”

Before and since the shop takeover, the co-owners have expanded its sausage production area, retail and cold storage areas, and have added a 54-seat eating area where regular customers and tourists stop by to munch on their popular smoked turkey, brisket, pork loin, smoked ham and other favorites from the Klein barbecue arena. As astute marketers, the partners also sell their barbecue items by the pound (to go) and slice smoked turkey, pork loin, and smoked ham thin into luncheon meats. 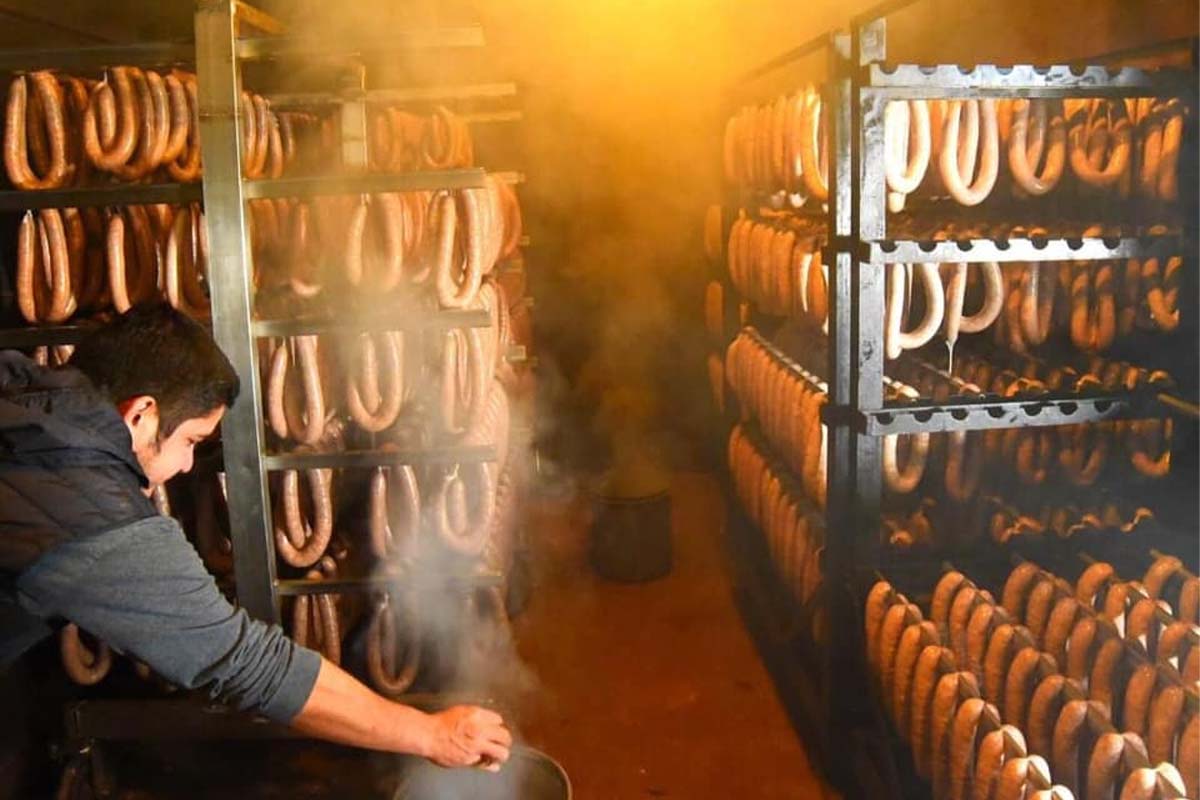 When asked how this ‘Main Street’ meat shop, where the meat flavor sells itself, got so popular, Sells put it simply: “We sell quality. We sell our pride. We sell our cleanliness. We sell our customers with our smiles. I believe we have a personal relationship with everyone when they feel we are happy to see them. We always want to continue that welcome hometown, local feel.”

Another way Klein Smokehaus attracts and retains customers is through their support for the Boerne community of 20,000. They support their local 4-H and Future Farmers of America, assist with sponsorships for the school cheerleaders and dance teams and forego radio, newspaper or billboard advertising. Klein calls it “word-of-mouth” advertising, or “spirit of the community” advertising.

Klein and Sells work diligently to partner with area ranchers, restaurant operators and even private game ranchers to process their products under private labels.

Still, they are staffed with 11 employees, a number that will mushroom to 35 (including part-timers) during the busy game processing season. Both admit that it has been a challenge transitioning from management to ownership, indicating that as managers they understand and work with the details of a small business, but that as owners they feel them personally and take them home to ponder.

The partners use the kleinsmokehaus.com website and social media to keep customers and potential customers alert to their services and ship mail orders. They are also pleased with the volume of gift boxes and party trays they can produce. Their signature products include their variety of barbecue items, oak smoked bacon and those hard-to-find or duplicate dry German sausages.

Sells explained that a new offering from the Smokehaus is its charcuterie gift box, featuring more upscale items like smoked beef and pork tenderloins, hard salami, jams and mustards, to “dress it up.”

For future growth, the Aggie pair have their sights set on increasing demand for Klein Smokehaus’s catering service. While they already have the “fixin’s” ready to go for pickup for most group events, including potato and broccoli salads, they are considering catering some off-site events like weddings, reunions and anniversary parties.

“There is definitely a market there,” they said. “We already have a barbecue pit and trailer we can deliver to sites outside of town.”