Chicken processing margins have much improved this year and will remain strong through the rest of the year because demand will outstrip supply.

The three main sectors of the US meat and poultry industry face different hurdles in the second half of 2022. The biggest challenge facing the beef processing sector will come late in the year as ongoing liquidation starts to show up in smaller supplies of both fed and non-fed cattle. Pork processors face the challenge of getting their margins back into the black after losses that began in early March. Chicken processors face the ongoing challenge of protecting their flocks from avian influenza (AI).

The main challenge common to all sectors is food inflation that is eating into Americans’ budgets and reducing consumer confidence in the economy. Inflation in May was 8.6% above what it was a year earlier, according to federal data. While few economists believe the economy will slide into recession anytime soon, concerns about that occurring could alter consumers’ protein buying patterns the rest of the year.

A plus for poultry

An analysis of the most widely consumed protein, chicken, suggests the poultry sector is best positioned to deal with inflation at whatever level. In fact, as demand for chicken domestically and globally increases, the biggest issue might be one that other sectors would like to have, tight supplies.

Despite cost pressures and operational challenges, the global poultry market is bullish, with high demand and tight supply, Rabobank noted in its third quarter 2022 report. The industry’s biggest challenge is operational, with high feed and energy prices due to inflation, labor availability and avian influenza, wrote Nan-Dirk Mulder, senior analyst of animal protein at Rabobank. Rabobank noted the significant impact of AI on the global poultry industry. Europe experienced the highest-pressure AI season in history, with 53 million birds culled. The highly pathogenic avian influenza hit the United States in February, with 38 million birds culled in the leading months. Japan, the Philippines, Mexico and Russia have also seen outbreaks.

One consequence of this challenging context is that supply will be tight, said Mulder. Mid-size and small producers are downscaling in response to higher working capital requirements and risks. New investment projects have been delayed, given the rise in investment costs, with high steel prices, rising interest rates, high logistical costs and a tight labor supply.

Still, poultry demand remains high as many consumers are choosing to substitute lower-priced chicken for beef products, said Mulder. Weaker economic growth and reduced consumer confidence, in part related to Russia’s invasion of Ukraine, will lead to more consumers trading down to chicken, added Mulder. Rabobank predicted a 0.5% to 1% increase in global production at most for 2022.

Mulder’s comments related to global demand, but they equally could have applied to the US market. Chicken processing margins have much improved this year and will remain strong through the rest of the year because demand will outstrip supply. Chicken production for the year to June 30 totaled 20.443 billion lbs, up only 1.1% on the same period last year. Chicken slaughter was up 1.5%, revealing that birds were being processed at slightly lighter weights.

As higher protein prices began to impact consumers in the first half of the year, it was clear that chicken would have a price advantage over the other main two proteins. The average retail price of chicken in May was $2.42 per lb, according to data from the US Department of Agriculture. This was up 18.6% from May 2021 but was still half the price of pork ($4.89 per lb) and just over three times lower than the average All Fresh beef price ($7.37 per lb).

Retailers by early June were publicly talking about how food inflation was causing more of their customers to buy more pork and chicken. This trend will continue through the rest of the year unless inflation significantly abates, economists said. The most pressure will be on beef, as it is by far the highest-priced protein.

The first signs of that pressure came in June as beef processors were forced to dramatically lower their asking prices on most middle meat items to attract forward sales. More consumers started to trade down in their beef purchases to ground beef, as they did in the 2009-2010 Great Recession, even though prices for its various forms were record high in May and June. 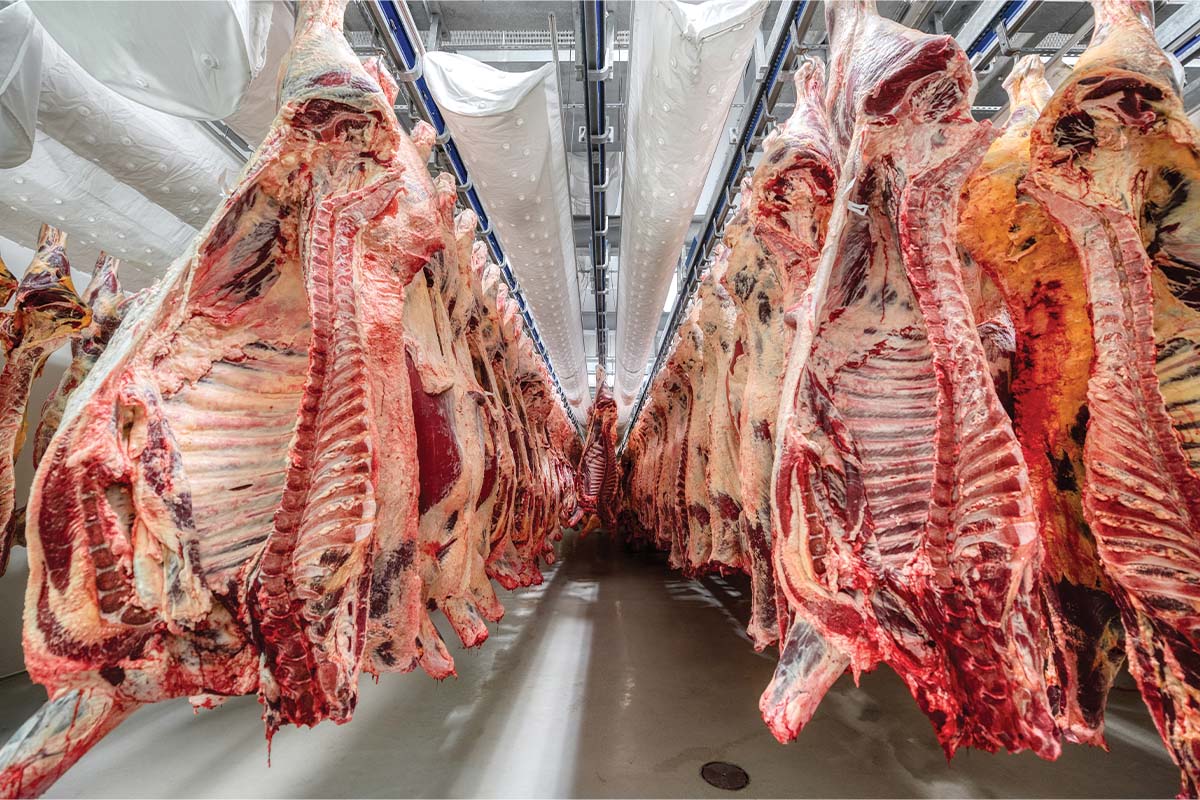 Beef processors will continue to see pressure on middle meat prices. More Americans than in a long time indulged their taste for high quality steaks while they were collecting federal stimulus money. But once those funds ended, many consumers began to revert to more frugal beef habits, especially as beef prices remained high. The May All Fresh price noted above was 9.5% above May 2021, while the average price of Choice beef in May was up 10.3%.

On the supply side, beef processors will face a shrinking supply of slaughter cattle by the middle of the fourth quarter. Beef cow slaughter through the first half of the year was up about 200,000 head or 9.5% on the same period last year. Widespread drought forced the increase. Drought also kept forcing light cattle into feedlots. The June 1 Cattle on Feed total was a record for the date. This means there are now fewer cattle outside feedlots to be placed, which means finished cattle supplies will start declining in October or November.

Meanwhile, live hog carcass prices in the last week of June were only 0.6% above a year ago. But the wholesale pork cutout was down 6% from last year. This and much higher operating costs were primarily the reason for negative operating margins of more than $35 per head (according to HedgersEdge.com). Pork processors might struggle to attain positive margins until the number of market-ready hogs starts to increase in the fall. But recent monthly Hog and Pigs reports indicate that producers are keeping a tighter than normal lid on expansion.