We use cookies to provide you with a better experience. By continuing to browse the site you are agreeing to our use of cookies in accordance with our Cookie Policy.
Home » Barbecue on the ballot

Barbecue on the ballot

Barbecue is usually defined in the United States by its geography. Innumerable debates have been waged over the regional differences of wood-smoked meats. Eastern North Carolinians prefer vinegar-based barbecue sauce to the mustard-based versions made in South Carolina. Texans will argue that their beef-heavy style of barbecue that favors dry rubs is far superior to the pork cuts slathered in sweet and tangy sauce that one finds throughout the Kansas City, Mo., area.

There is truly no correct answer to the country’s best barbecue.

Traditionally, the DMV area (Washington, DC, Maryland and Virginia) is not a barbecue destination like Kansas City, Austin, Texas, or Memphis. Yet, these days the nation’s capital is drawing some attention from barbecue aficionados for the wonderful brisket, ribs and pork coming out of smokers in the area.

Adaptability has been key during the pandemic.

Federalist Pig is one barbecue restaurant that is not trying to wade into the turbid waters of regional barbecue styles but is focused on how the meat tastes as it comes out of the smoker instead.

“I’ve eaten barbecue all over the country and there’s really only two styles when you boil it all the way down: good and bad,” Federalist Pig co-founder and pitmaster Rob Sonderman said. “As long as we can be on the good side of things, that’s where we kind of want to live.”

The first Federalist Pig opened about six years ago and now serves out of three locations: one in Washington and two just over the border in Maryland. Sonderman said that the Pig pulls from all barbecue traditions and tries to get creative with how it serves its smoky meat, especially its sandwiches.

“Most places when you get a sandwich you just get meat on a bun with pickled slaw. You can obviously do that here, but we’ve pulled from famous, well-known sandwiches and put our own little barbecue twist on them,” he said.

For instance, there is smoked duck leg confit with arugula and shaved fennel salad, or a Chicago-style smoked Italian beef sandwich with house-made giardiniera. The Pig even offers vegetarian options like a tofu banh mi with crispy onions and a garlic aioli.

Recently, the Federalist Pig partnered with Table 22 to offer a barbecue supper club that lets customers experience a global tour of barbecue. One month featured West Indian-Caribbean barbecue, another had an Irish-themed meal for St. Patrick’s Day and, in May, the supper club highlighted Korean-style barbecue. 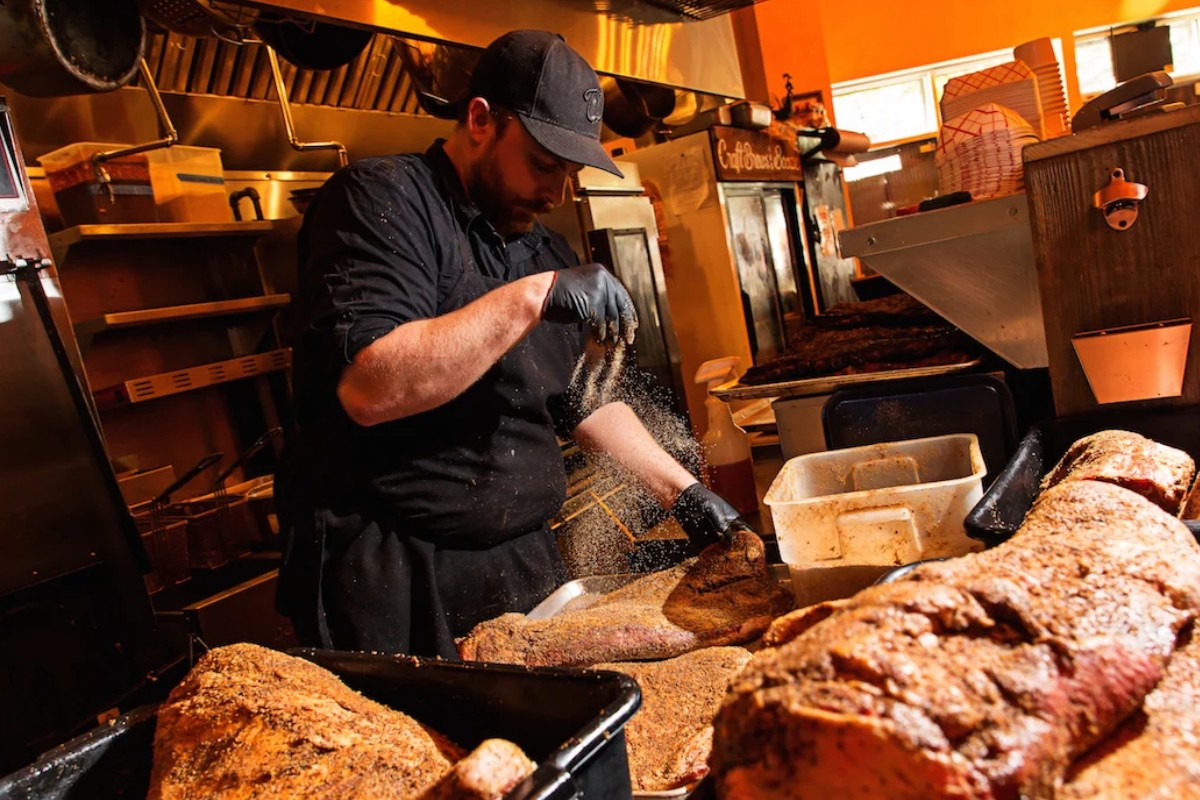 The idea was conceived when the pandemic shut down in-person dining — and like many other restaurants — the Federalist Pig had to pivot its business to reach customers. Yet, finding ways to get food to paying customers was just one problem, getting the product to cook was another.

The restaurant uses certified choice (or higher) Angus beef brisket. Ideally, the Pig would smoke more Prime briskets but the pandemic has made sourcing difficult and expensive.

Brisket became a big problem early in the pandemic. At times, brisket prices doubled in the last two years, Sonderman said. The restaurant experimented with using chuck flap meat or boneless short ribs instead of brisket.

Another cost-reduction strategy has been engineering the menu in ways to draw customers to dishes that yield higher profit margins, Sonderman said. “As much as we love brisket and everybody loves brisket, we’d rather people order chicken, pulled pork sandwiches and ribs.”

Now, Sonderman is seeing the price of chicken and pork ribs start to go up and the Federalist Pig finds itself in the same position that most businesses are in these days: raising prices to offset inflationary pressures. 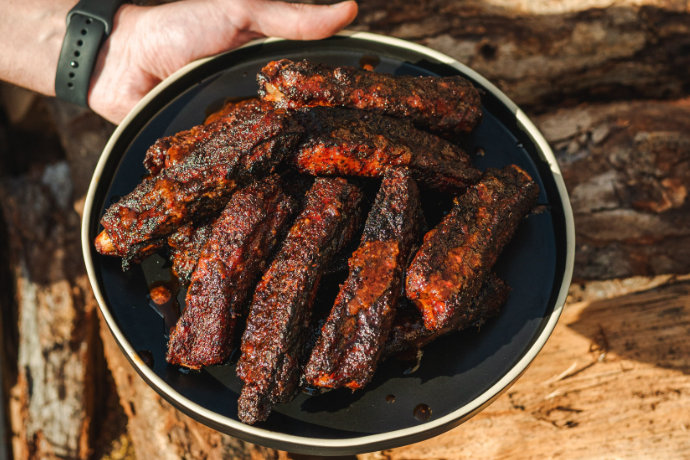 Bark Barbecue Cafe intentionally doesn't offer meat by the pound on the menu to encourage diners to order a meal that is budget friendly. (Source: Hawkeye Johnson)

Lobbying for the lunch crowd

Federalist Pig is not the only Washington-area barbecue restaurant having to find ways to keep customers happy while managing the costs of running a restaurant during a pandemic.

Bark Barbecue Cafe evolved out of co-owner and Pitmaster Berj Ghazarian’s hobby interest in live fire, pit barbecue. He had been hosting pop-ups and catering private events since 2013, but it wasn’t until last December that he decided to open a brick-and-mortar location.

Bark uses live-fire, offset Moberg smokers to cook its meat. Initially, the idea was to open a weigh-and-pay style barbecue restaurant where meat is ordered by the pound.

“But that’s not really conducive to every market in my opinion,” Ghazarian said. “The average person will spend anywhere between $25 and $30 there and we didn’t think that that model was going to be very sustainable for the market.”

Bark Barbecue Cafe’s market focuses on the lunch crowd. The restaurant is in Stevensville, Md., in a business park on Kent Island in the middle of Chesapeake Bay – a strange place for a destination barbecue restaurant. Co-owner Berj Ghazarian has a food manufacturing company located in the building next door.

The restaurant is open from 7 a.m. to 3 p.m. Monday through Friday, primarily serving the approximately 1,200 people who work in the business park.

But its popularity has grown thanks to word-of-mouth marketing as well as making Washington Post food writer Tim Carman’s “Best Barbecue Joints in the D.C. Area” list in February. Bark is now preparing to open for weekend hours due to the demand from hungry locals and District of Columbia diners.

“The menu is geared towards a sandwich and bowl concept. And we have breakfast burritos,” Ghazarian said. “It’s a little bit more approachable, definitely more affordable, and more curated.”

Similar to Federalist Pig, Bark is looking to expand its business into a model that more closely aligns with how dining has changed during the pandemic. The restaurant is hoping to launch family meal kits soon.

“We realized that eating habits have kind of changed since the pandemic,” he said. “You can kind of pick something up on your way home from work and enjoy it with the family.”

Pre-pandemic, when Bark was purely a pop-up operation, Ghazarian was getting all his meat from Fells Point Meat in Baltimore, but when the restaurant opened, he needed to source a lot more USDA-Prime beef and the prices had become untenable.

Before the pandemic, the going rate for a pound of barbecue brisket was anywhere from $21 to $24 a pound, Ghazarian said.

Ghazarian found that Costco offered the best price for whole packer Prime briskets. Currently, he is getting his briskets for about $2 per pound less than any other purveyor.

“For a small business, when we’re cooking 100 to 150 pounds of brisket a day, it adds up and it’s a big savings,” he said. “We don’t have a super intimate connection with any local purveyors right at the moment for the meat, but it’s more out of a necessity to kind of survive.”

Bark intentionally doesn’t offer meat by the pound on the menu to encourage people to get something that is affordable. Barbecue in the DMV area is no longer a niche market. It has developed into a part of the food culture of the metropolitan area.

“Competition definitely has gotten a lot stiffer here in DC and there’s a lot of really great barbecue restaurants,” Sonderman said. “The average consumer knows what great barbecue is now and so it’s raised the bar.”