We use cookies to provide you with a better experience. By continuing to browse the site you are agreeing to our use of cookies in accordance with our Cookie Policy.
Home » A century of hot doggin’

A century of hot doggin’

Nostalgia and tradition serve as the backdrop of a restaurant that has been a fixture on Main Street in downtown Fort Wayne, Ind., for over a century. Since its founding in 1914, Fort Wayne’s Famous Coney Island Wiener Stand has earned icon status among locals and unsuspecting, hungry passersby who happen to wander into the throwback eatery and are spellbound for life. While many foodservice operators thrive with new menu item promotions, updated concepts and continually changing to appeal to the most customers, Jimmy Todoran, co-owner, is sticking with a rinse-and-repeat model that has served his restaurant well.

Even before he started working at Fort Wayne’s Famous Coney Island at the age of 16, very little about the menu, the workers, the customers and even the prices changed. And the business has been a family affair over the years, as his dad and 11 uncles worked at the restaurant throughout the years. It’s a Fort Wayne fixture with a fiercely loyal following with fans that span the entire country and all walks of life.

“I ended up never really leaving,” he said, 34 years later.

The company has been owned by the same Macedonian family since 1916, when Vasil Eshcoff became an owner. His daughter married Russ Choka, who worked with his father-in-law and took the torch from Eshcoff in 1961. Choka was running the restaurant back when Jimmy started washing dishes there as a teenager. He recalled it was when “Mr. Choka” passed away that he had the opportunity to buy out the business’ other partner, who was retiring. Russ’ granddaughter, Kathy, owns the other half of Fort Wayne’s Famous Coney Island. Todoran carried on most of the same traditions preserved by the Choka family and the original owners, including a strong work ethic and providing quality, affordable food and serving customers quickly.

“He worked until he was 88 years old, seven days a week,” Todoran said of Kathy’s grandfather.

Other traditions included keeping the operations, the décor and even the menu at Fort Wayne’s simple.

True to tradition, hot dogs are cooked on a flat-top grill and served on steamed buns with mustard, homemade Coney sauce and topped with hand chopped, white onions. The rest of the menu includes a basic hamburger, cheeseburger, a bowl of signature chili soup, made daily in house and served with oyster crackers, and a bowl of oven-baked beans.

Even the drinks harken back to 1914, with Coca Cola sold cold in 8-oz glass bottles.

“He (Russ Choka) never changed anything, and it became kind of chic, I guess – kind of retro,” Todoran said. “It’s because of tradition that a lot of the things that we have in the restaurant are still here today.”

Those things include some of the original counter stools, porcelain-topped tables from the 1920s and a 1928 ice box that was converted to electric refrigeration in the 1930s and is still an operating fixture behind the counter.

Another tradition that is alive and well is Coney Island Wiener Stand’s affordable prices, with hot dogs priced at $1.75, burgers (made with ground beef supplied by a neighboring butcher shop) for about $4 and chili soup for $3.50 a bowl. Todoran said the restaurant has always had a mission to appeal to all types of people, regardless of socioeconomic status.

He recalled working one of his first shifts when he waited on the governor of Indiana who was seated two stools away from a homeless person.

“You just never know who will come through that door,” he said.

Some customers have made Fort Wayne’s Famous Coney Island their own family tradition, many of whom know about the option to enter the restaurant from the back door, accessing the dining room by cutting through the kitchen. Coming through the back door has evolved as a tradition for many customers for the past century.

“It’s kind of a rite of passage,” Todoran said. “You know, this is the cool way to come in.” 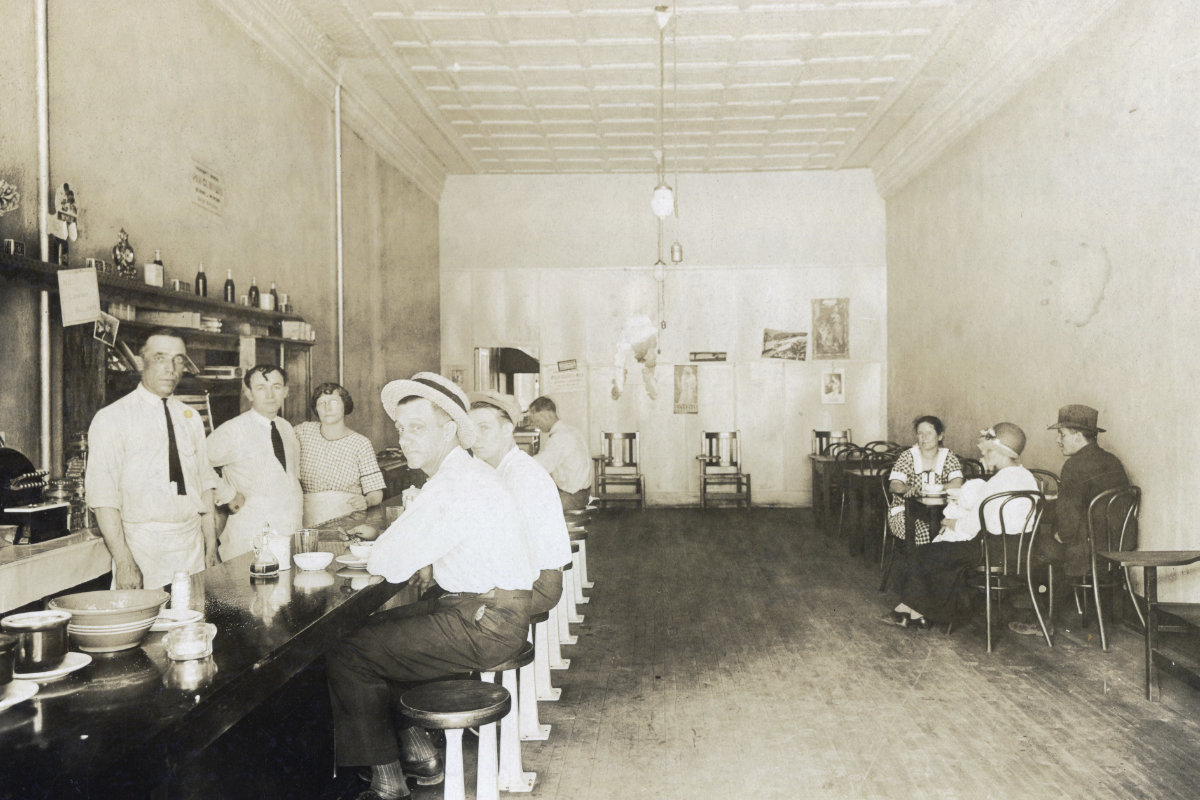 Little has changed about the appearance and the menu at Fort Wayne's Famous Coney Island Wiener Stand over the past century.

Todoran’s eatery is about 1,500 square feet and only has 12 tables with additional seating at the counter. Fort Wayne’s Famous is open seven days a week and cooks and serves thousands of hot dogs each day.

“Two thousand hot dogs is an average day,” Todoran said, with that number more than doubling seasonally, when a throng of visitors are drawn to a regionally famous Christmas light display just one block from the restaurant. Part of that holiday tradition for many is heading to Fort Wayne’s Famous, where hordes of customers form a blocks-long line out the door throughout the holiday season.

All of the hot dogs are cooked on a 3-foot grill, strategically positioned in the storefront window facing Main Street. Fort Wayne’s Famous serves 12:1, 6-inch frankfurters made from beef and pork. Kent Quality Foods, based in Grand Rapids, Mich., has been the supplier of the hot dogs since 1992. Hot dogs are shipped to the restaurant three times a week and in a typical year, Fort Wayne’s will purchase about 900,000 wieners. During the year of its 100th anniversary in 2014, that number topped 1 million due in part to special events it hosted to commemorate the milestone, including a block party that locals and Todoran remember fondly.

“We have a steamed bun and serve them with a stripe of mustard and a homemade sauce, like a peppery Coney sauce, not a chili, and fresh hand-chopped onions,” Todoran said.

Two employees work two hours a day, seven days a week hand chopping 75 lbs of onions a day and up to 200 lbs per day during the holiday season.

“We wear out a lot of cutting boards,” he said.

To keep up with demand for Coney Island’s hamburgers, cheeseburgers and to make its chili soup and Coney sauce, the restaurant uses about 3,600 lbs of ground beef per month. The 80:20 beef is sourced from a local butcher, Tim Didier Meats, that delivers fresh product to the eatery six days a week.

“Everything’s fresh. We don’t have a freezer on site; we constantly are cooking, seven days a week,” Todoran said. 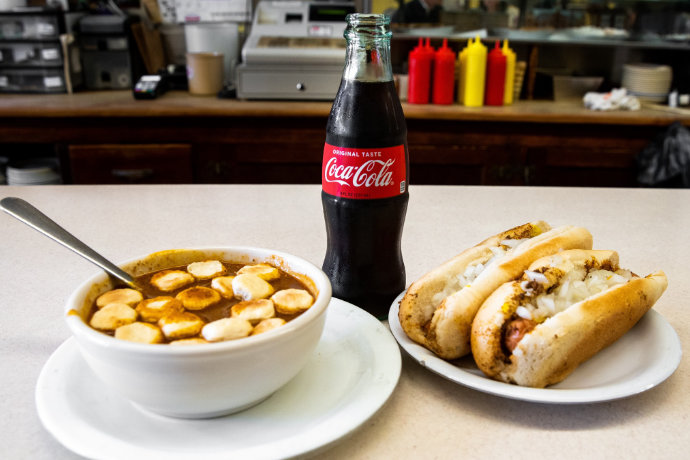 No tweaks of recipes, new menu items or cooking methods have ever been a part of Fort Wayne’s Famous business strategy.

In the 1980s, the company experimented with franchising the concept, adding three locations, including one in Indianapolis and two in Fort Meyers, Fla., but that venture was short lived.

“We didn’t feel like the people ran it the way we liked,” he said, including franchisees taking shortcuts to hand-chopping onions, which he said cheapened the product.

“We kind of like just keeping our own location and protecting our product.”

He said the company has had to adapt to market changes and challenges, especially in the past couple of years. COVID-19 triggered a hiccup in the business, but the Fort Wayne community rallied to support the restaurant through the lean times when to-go orders spiked and Todoran spread out seating inside the restaurant in the name of social distancing. Sales and restaurant traffic today have surpassed pre-pandemic levels.

Rising prices for raw materials used to make the restaurant’s products have also been a hurdle to its operation. Todoran said he has done everything possible to resist passing the higher prices on to customers, but he did raise the price of hot dogs on the menu by a dime.

“We’re going to hold on there as long as we can and just see how everything shakes out. We do our best to keep our prices down.”

Todoran has two sons, one in high school and one in college, who work at the restaurant part time after high school classes and during college breaks. His younger son aspires to follow in his Dad’s footsteps and work full-time at Fort Wayne’s Famous Coney Island.

Todoran said he isn’t tempted to draw the spotlight and national attention to the eatery, it isn’t a goal. Flying under the radar is much more appealing.

“I like keeping it a little hometown favorite spot,” Todoran said. “It feels a little more wholesome that way instead of a tourist attraction.”