We use cookies to provide you with a better experience. By continuing to browse the site you are agreeing to our use of cookies in accordance with our Cookie Policy.
Home » Bacon – above and beyond

Bacon – above and beyond

When the co-creators of Cobblestone, a bistro and cider bar in Chicago, tapped Michael McCloud as executive chef, the intent was to develop an unpretentious menu of unique European cuisine with an American twist. This includes bacon in its many ways, shapes and forms, such as the cider-braised pork belly starter.

Pork belly is the fatty, fleshy cut of meat from the abdominal area of a pig. When sliced, smoked and cured, it becomes bacon. Left whole or cut into smaller chunks, usually with the skin on, it is best slow cooked for a tender chew and to render the fat into a soft, melt-in-the-mouth consistency.

“Pork and apples, literally, that’s all I thought about when I designed the pork belly shareable plate,” said McCloud, who was born in San Antonio and raised in Plano, Texas. “I wanted to bring a little bit of my Texas barbecue to the table, hence the grilled, smoked pink lady apple sauce and rye maple glaze. I maintained the ‘pork and apples’ thought process, braising the whole pork belly in hard apple cider for four to six hours, low and slow, enabling the meat to melt in mouths. The crisped skin from a cast iron hard sear is the bonus.”

He continued with that mindset when he developed a loaded apple potato soup made with smoked apple bacon and a pulled pork belly French fry appetizer topped with guajillo apple barbecue sauce for the northside neighborhood’s Apple Fest held Oct. 3-4. The dishes are McCloud’s playful takes on the classic “porkchops and applesauce.”

Marge O’Brien, director, market insights, Corbion, Lenexa, Kan., said, “From a flavor perspective, the concept of such ‘mashups’ is emerging in the bacon category. Examples include applewood smoked cheddar and bacon cheesy potatoes, a bacon cheddar sausage that mixes cheddar cheese with a savory hickory smoked bacon and even a beef and bacon blended patty made with 50% beef and 50% bacon.”

Sonora, Calif.-based Diestel Family Ranch is getting creative with bacon for the retail channel. The company has added frozen turkey burgers made with uncured bacon from Pederson’s Natural Farms Inc., Hamilton, Texas, to its lineup. The new freezer-to-grill-ready burgers deliver on flavor and texture, plus 20 grams of protein.

Pederson’s is at the forefront of making truly uncured bacon. It was also the first company to make a no-added-sugar bacon available nationwide. All products are made with humanely raised pork and without the use of artificial ingredients or artificial preservatives. To make its no-sugar-added hickory smoked uncured slices, the company replaced celery powder – a natural source of curing nitrates and nitrites – with plant extracts. This ingredient system is made with a blend of pomegranate, rosemary and citrus (lemon, lime and orange) extracts, sans the sugar, and vinegar. The meat soaks up the solution over time rather than being injected all at once. This product, and the growing number of other no-sugar-added bacons in the marketplace, appeal to consumers following popular eating plans, including keto, paleo and Whole30. 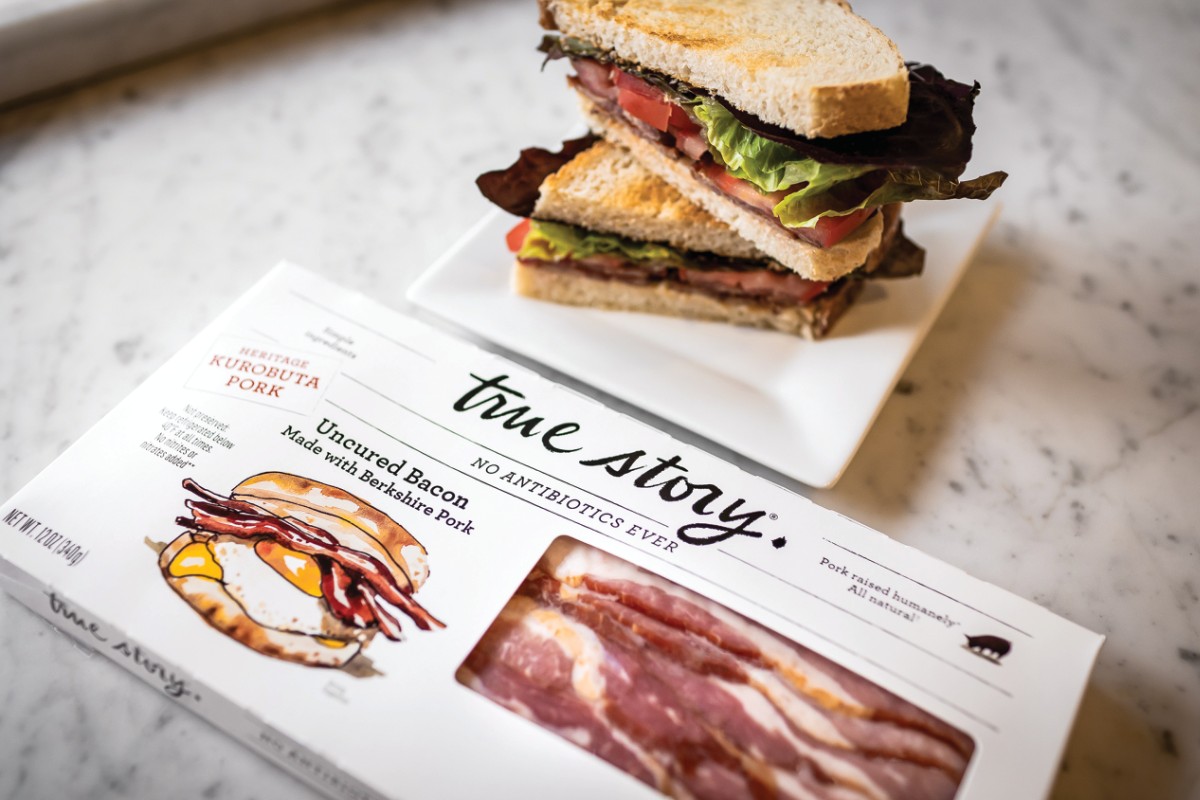 True Story Foods offers uncured bacon made from heritage Kurobuta pork- often referred to by chefs as the "wagyu of pork."

For those who prefer more protein than fat, the company makes Buckin’ Bacon using the center of the pork shoulder instead of the belly, which is chopped and formed into slices. This makes for a leaner-style of bacon that also has no added sugar; however, it does use celery powder for a “natural” cure.

“Sugar is used to counteract the harshness of salt and further aids in the caramelization during the cooking of the slices,” said Robert Johnson, senior business development director, smoke and grill, Kerry Red Arrow, Manitowoc, Wis. “One could eliminate the sugar from the curing solution and reduce the ingoing salt to achieve a balance similar to a product formulated with a higher salt and sugar content.”

Miller said, “Producers may be able to fake some sweetness using woods and liquid smoke that have a sweeter profile such as apple, maple and cherry woods.”

Other styles of bacon that are growing in popularity include pasture-raised heritage, jowls (pigs’ cheeks), double-smoked and wagyu beef, according to Edyta DeVito, senior food technologist, Nu Products Seasoning Company, Oakland, NJ. Small batch and handmade claims are trending, too.

“For these higher ends of bacon, we do not want to over season them but instead enhance their natural flavors,” DeVito said. “We developed a clean-label flavor and umami enhancement alternative to monosodium glutamate.”

Ron Ratz, senior vice president, Wixon Inc., St. Francis, Wis., said, “Thanks to social media platforms, foodies are now preparing creations like ‘twisted bacon’ strips, transforming an addictive comfort food into a crispy, sweet, salty, savory, smoky handheld treat. This ingenious concept entails twisting raw bacon to create a spiral bacon rod. Then it’s cooked in an oven or air fryer until the ultimate crispiness is reached. These twists can then be flavored with topicals, such as an ‘everything bagel’ blend or a Japanese-inspired shoyu pork flavor system.” 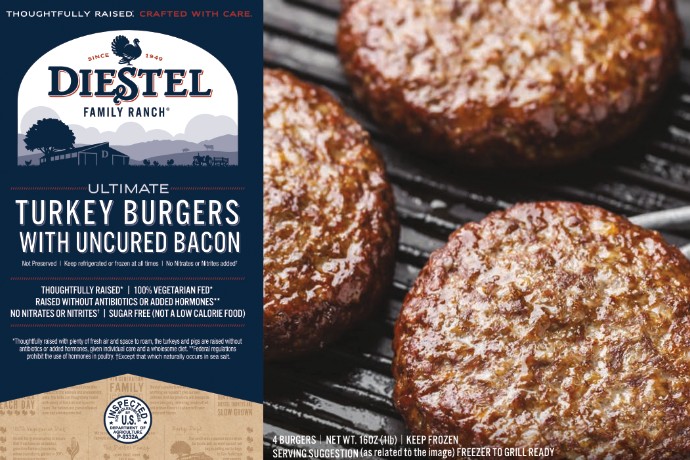 In order to meet the growing demand for bacon, Diestel Family Ranch has added uncured bacon to its turkey burgers.

Flavor components may be applied as part of the brine (wet curing) or topically. When particulates are included, topical application makes more sense, especially if the brine is injected, as particulates can cause blockage in the injection needles.

“With wet curing, all ingredients, which may include flavors such as honey or maple, are mixed with water to make a brine,” said Garrett McCoy, senior manager of research and development, Corbion. “Natural hardwood smoke, such as hickory, applewood and mesquite, may be applied during the thermal processing of bacon.”

Johnson said, “Typically seasoning is pressed onto the sliced slabs immediately prior to packaging. We have seen electrostatic spice transfer film being used. In this instance the film clings to the packaging material and the seasonings are transferred to the edge of the sliced strips. In other cases, we have observed seasoning applied to the fat side of the belly prior to thermal processing, post injection.”

In-store butchers have started rubbing seasonings on bacon. This allows them to create limited-edition and seasonal offerings. To do this, the top of bacon is moistened slightly with water and rubbed liberally with the seasoning.

“Instead of buying various products, they’re able to bring in one product and diversify it in amounts and flavors that suit each individual store,” Miller said. “Some of the flavors I’m seeing are hatch green chili, Nashville hot and even French toast.”

Depending on the carrier, certain seasonings can contribute to excess caramelization and even burning or scorching of the product when cooked by the consumer. It is important to work with your ingredient supplier to add their expertise to address these challenges.

Kalsec, Kalamazoo, Mich., offers varied flavor solutions for bacon applications, including ingredients for dry seasonings, marinades, cures and brines. They are standardized for full flavor and aroma, and are available in different delivery systems, including oil soluble and water dispersible, to provide flexibility based on the specific application.

“For whole muscle bacon processing, we offer brine-dispersible ingredients – both spice extracts/flavorings and natural food protection solutions like rosemary extract – that are very compatible to the injection enhancement and curing methods currently practiced in the industry,” said Poulson Joseph, director of food protection and protein innovation. “This ensures uniform flavor and functional ingredient distribution and an excellent tasting experience for the consumer.

“For sliced bacon-style products or for bacon bits, our ingredients are very compatible for creating a dry rub/dry seasoning for manufacturers creating value-added products with unique flavor and taste profiles,” Joseph said. “In addition, studies have shown that including our brine-soluble rosemary extract can help to maintain fresh bacon flavor, without oxidative changes, for up to 120 days in frozen storage in sliced bacon.” 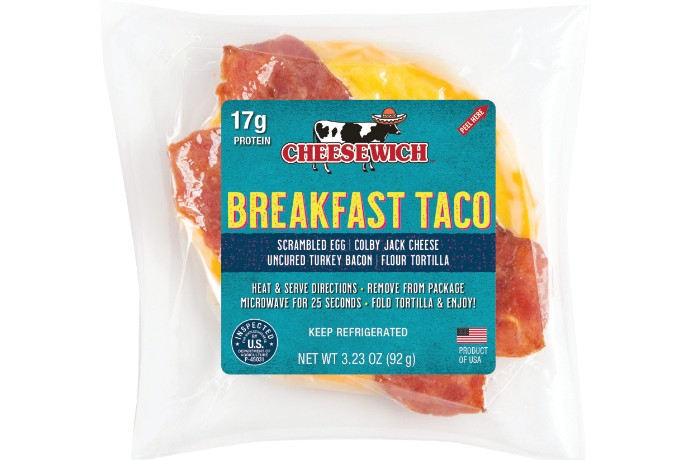 Bacon will always be an important-addition to the breakfast daypart whether as a part of a traditional meal or in to-go food such as the Cheesewich Breakfast Taco.

Kalsec’s ingredient toolbox can give bacon a unique flavor profile, ranging from adding a touch of pungency to featuring a specific type of pepper. When it comes to certain spices, inherent color can interact with final product quality. Pilot testing through desired shelf life is recommended, Joseph said.

When reducing sodium, it is also important to test for quality and flavor throughout the desired shelf life, as not only does sodium influence flavor, it impacts product integrity, color and safety. There are many ways to reduce sodium without impacting flavor. Wixon for example, has an ingredient system that provides the same salt perception with a lower salt load in the finished product, said Zak Otto, senior research and development manager.

“We have also developed two new products that are a perfect fit for bacon,” Otto said. “These sustained release flavors are completely soluble in water and can be added to the injection system or applied topically to bring a long-lasting flavor and aroma to products.”

Bacon jerky is an undeveloped meat snack sector that is garnering attention because of interest from outdoor enthusiasts looking for shelf-stable sustainable energy foods. This may be made with cuts where there are larger bands of muscle and a higher lean-to-fat ratio or even simply with fully cooked bacon strips.

Armstrong said to keep sugar levels low in jerky and most other packaged, shelf-stable meat snacks. Sweet flavors may deliver some of that candied taste without the sugary shortcomings.

Kathryn Thamann, associate scientist, taste and sensory innovation team, Kalsec, said, “Not only do we have the typical savory spices, but we also have sweeter spice flavors, like allspice, nutmeg, cinnamon and maple, which are a great complement for bacon.”

Citrus flavor profiles, for example, play into adventurous sweet flavor combinations, such as a Hawaiian teriyaki-style jerky. Heat and sweet is also trending.

“Pulling a vacuum opens up the protein to allow the seasoning or marinade the chance to get all the way through the meat, not just on the outside,” he added. “The following day, lay out the cuts of meat for the dehydrator.”

While nothing beats real bacon, the category is not immune to the plant-based movement where many innovators are trying to come close to the real deal. Hooray Foods, San Francisco, is one such player. The company developed a plant-based bacon made using encapsulated coconut oil, which enables the strips to sizzle, smell and supposedly taste like bacon. Other ingredients include rice flour, tapioca starch, liquid smoke, umami seasoning, maple syrup, salt and beet juice concentrate.