We use cookies to provide you with a better experience. By continuing to browse the site you are agreeing to our use of cookies in accordance with our Cookie Policy.
Home » Going to the ground

Going to the ground

The demand for ground meat and beef in any of a variety of formats is on the rise and processors are continually working to find the right mix of technology, technique and expertise to meet the evolving demand for these versatile products. From overwrapped loaves to convenient chubs to individually formed patties, ground meat has been a longtime staple in the diets of most American consumers. And the COVID-19 pandemic did little to slow down demand.

Less than a year into the pandemic, the dominance of ground products across species was especially strong, according to data from San Antonio-based 210 Analytics. In January 2021 alone, the volume of ground beef sold at retail totaled more than 217 million lbs, increasing sales by nearly 9% from the previous January to approximately $863 million.

Meanwhile, ground chicken started the year with a paw up, as sales in January increased 19% to $18.7 million and sales of ground pork for the month were just under $15 million, 12% higher than in January 2019. Taking a broader look at trends in ground meat since September 2020 to this past month the numbers tell a more complete and more positive story about the growing demand.

“Ground beef, we all talk about what an incredible story it has been. But it’s not just ground beef,” said Anne-Marie Roerink, principal and founder of 210 Analytics during a September webinar summarizing the findings of Cryovac Brand’s 2021 National Meat Case Study, hosted by the North American Meat Institute. “We also see great strength in ground chicken, ground pork.”

“The versatility of grinds is what we are seeing and that is one of the areas we also noticed when we went in and counted packages in the meat case,” Roerink said.

In terms of packaging, a vast majority of ground beef packages in the 2021 National Meat Case Study utilized case-ready packaging, totaling 86% this year compared to 83% in 2018. A number of consumer surveys, including the Food Marketing Institute’s annual Power of Meat study, indicate that a majority of consumers have no issue purchasing meat that wasn’t processed and packaged in the store.

She said it should come as little surprise that according to the National Meat Case Study, the share of case-ready meat packages grew from 49% in 2002 to 85% in 2021.

“This isn’t a fluke, and this isn’t a labor issue, this is a trend we are seeing every single time this study is done,” she said.

Another telling trend in the study is the increased use of vacuum-packaging technology used for all varieties of meat compared to 2018, including 32% of ground beef packages. Meanwhile across-the-board declines in the use of PVC wrap, presumably for reasons related to sustainability and shelf life, included a decrease in ground beef packages, while chubs dipped to just 14%.

When it comes to ground beef branding at retail, private labels made up 47% of packages in the latest Meat Case Study, compared to 33% carrying a supplier brand and 20% with no brand.

As for product claims on ground beef, grass-fed beef sales as a whole jumped more than 15% in 2021 compared to last year totaling more than $823 million, according to IRI. This year’s National Meat Case Study reflects that growth, with grass-fed ground beef growing to include 23% of packages versus 15% in 2018. 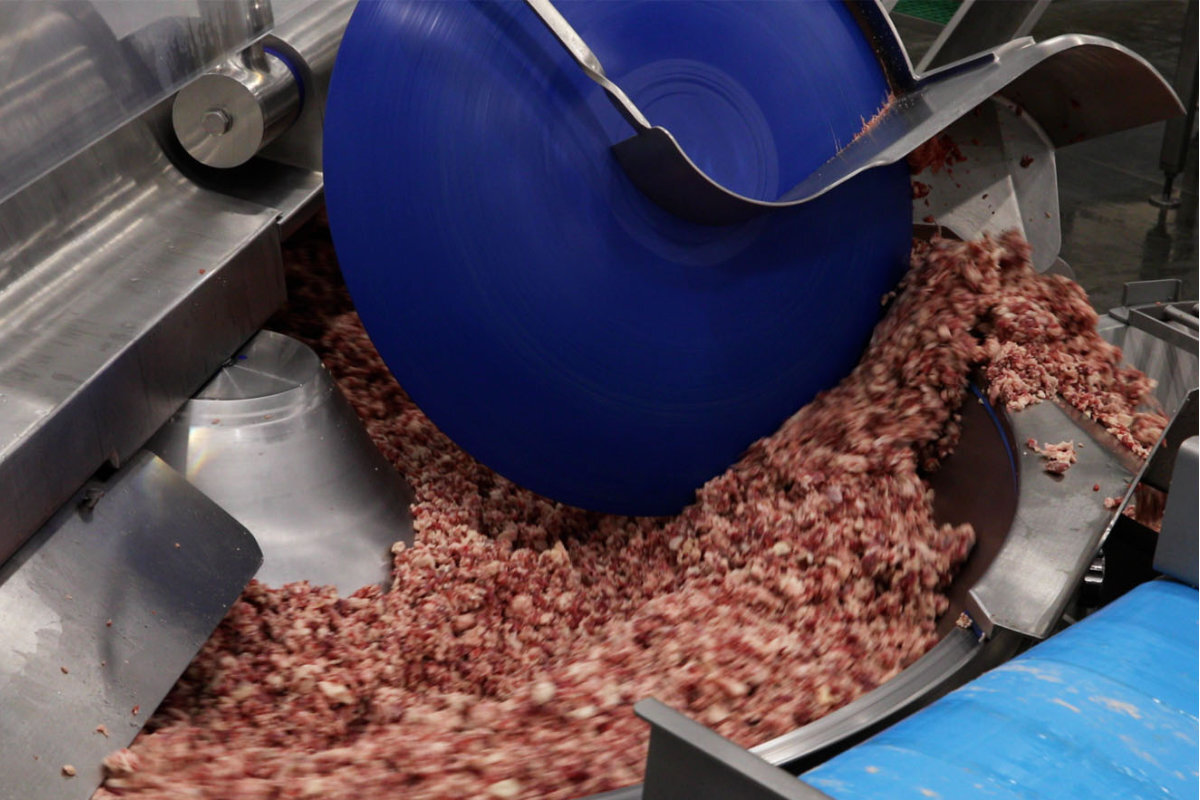 At Certified Piedmontese, the blending and mixing process starts with dumping trim-based hoppers full of beef into a 700-lb capacity bowl chopper before an auger moves the meat to one of the two lines where the beef is conveyed to a grinder/mixer. (Source: Certified Piedmontese)

With clear evidence of the growing demand for ground product, it makes sense that many processors are investing more resources to meet that demand. This past year, Lincoln, Neb.-based Certified Piedmontese moved into its new campus where it processes premium beef products sourced from a breed rich in flavor and a bloodline that dates back to the 1600s, that originated in the Piedmont region of northwestern Italy. Its evenly marbled tomahawk ribeyes, filet mignons and strip steaks are the superstars of CP’s offerings, and grain-fed cattle are the company’s mainstay source of the company’s premium ground beef.

The company launched a grass-fed line this past year and its principals say this is the foundation for its future. A vital part of CP’s five-day a week processing schedule includes production of about 60,000 lbs of ground beef, including loaves and premium patties. Currently the company’s product mix is about 70% retail and 30% foodservice with a goal of growing the foodservice segment to 40%. The beef-processing operation distinguishes itself from many others not only by sourcing its raw material from the unique Piedmontese breed, but in its processing practices.

Perhaps one of the most notable steps in its blending and mixing process starts with dumping trim-based hoppers full of beef into a 700-lb capacity bowl chopper before an auger moves it to one of two lines, where the beef is conveyed to a grinder/mixer and then dumped into a Vemag stuffer. The well mixed and chopped beef is then formed either into loaves that are directed to a thermoformed packaging area or onto a patty forming line followed by a vacuum tray package area of the plant.

The Reiser-heavy ground beef line is a good fit for the company’s growing grinding operation, according to Nick Lahm, plant manager. As steak cutting increases at the plant, so too will its capacity to produce more ground beef. Currently the company will process about 400 head of cattle per week and with the addition of more processing space, including a smokehouse and cooked foods capabilities, Lahm expects the plant’s capacity to grow as much as 45,000 lbs per day.

Another company that is transitioning in the opposite direction from CP, is Columbus, Ohio-based White Castle, where supplying its 362 restaurants with ground beef patties is the primary focus of its three company-owned beef-processing plants. Producing ground beef only helps simplify the operations at the plants in terms of efficiency and productivity.

During a 2021 tour of White Castle’s Zanesville, Ohio, beef processing facility, chief operations officer, Dave Rife, explained what makes the operation successful and its products consistent, whether for retail distribution or shipment of frozen patties to its restaurants. The company works with a network of beef companies that ship frozen, 60-lb blocks to the plants. Raw product is stored in a freezer before the blocks go to an unboxing area and are conveyed to the first of two grinding operations using grinding and blending equipment from Weiler.

“The yield is phenomenal,” Rife said of the results of the double grinding and blending process that is a standard practice for White Castle’s beef. “The primary grind is a larger grind and the meat goes then into the mixers in a process that lasts about 15 minutes.”

Next, the product goes to the final grind, using a much smaller grinding plate, and it is extruded using White Castle’s customized, five-hole horn, that is equipped to create the square logs and the tell-tale holes that run the length of every log.

“In the final grind, that’s where the magic happens,” said Al Swearingen, plant manager, as the more finely ground beef is extruded through White Castle’s proprietary meat horn, which creates the signature five holes that run the length of every log and are part of every patty.

Like the patented beef horn, a log saw, which was also custom-made by White Castle engineers, cuts the logs into uniform, 37-inch lengths before they are conveyed to a spiral freezer prior to slicing. Swearingen said that a crust is formed when the logs’ internal temperature is chilled to 26˚F and an external temperature of 0˚F.