We use cookies to provide you with a better experience. By continuing to browse the site you are agreeing to our use of cookies in accordance with our Cookie Policy.
Home » Monogram Foods private label brings on the bacon

There are many kinds of bacon and ways to make this favorite among meats in the United States. But one major factor in production of what might be America’s most popular meat is that bacon production lends itself to private labeling and co-manufacturing in the meat processing industry.

That’s certainly true of the big part bacon plays in Monogram Foods operations, said Wes Jackson, president of the Memphis, Tennessee-based company. Jackson described the company’s mission and the bacon production it carries out, in an interview with MEAT+POULTRY.

“Bacon is responsible for over 20% of our revenue. It gives us diversity in the meats we produce, since we have ten manufacturing facilities across the United States,” Jackson said. The plants that are part of Monogram Foods are located in six states and employ 3,000 people.

While the company’s owned brands make up a small portion of its business when compared to its co-manufacturing and private labeling, Monogram does produce its own line of bacon under the King Cotton brand. “King Cotton Meats is a Memphis original, the city where we are based, and is a longtime home favorite,” Jackson explained. Monogram also makes a number of meat brands that are sold within regional areas not all that far from Memphis.

In Monogram’s business model and operations, the company manufactures the majority of all its meats, including its bacons, for other companies. Its private label bacons are made by Monogram for sale under another company’s brand. The company also “co-manufactures” or “co-packs” meats. In co-packing or manufacturing, it produces the products for its clients, but the client owns the rights to the product formulation.

The production of bacon is something that works particularly well for these two types of meat processing operations. “The reason bacon especially is cut out well for co-manufacturing and private labeling is because many processors who would like to sell bacon have a shortage of capacity for making it. So, it works out very well for people like us and our business to make bacon for other meat companies who can’t do it on their own,” Jackson pointed out.

“And it fits wonderfully in the two major arenas where bacon is sold – foodservice for restaurants and hotels, and retail sales in groceries and supermarkets,” Jackson explained. “Monogram’s lifeblood is making other folks’ products and brands for them. The fact is, many bacon producers have a network of bacon suppliers like us that help them meet the demand for their bacon products.” 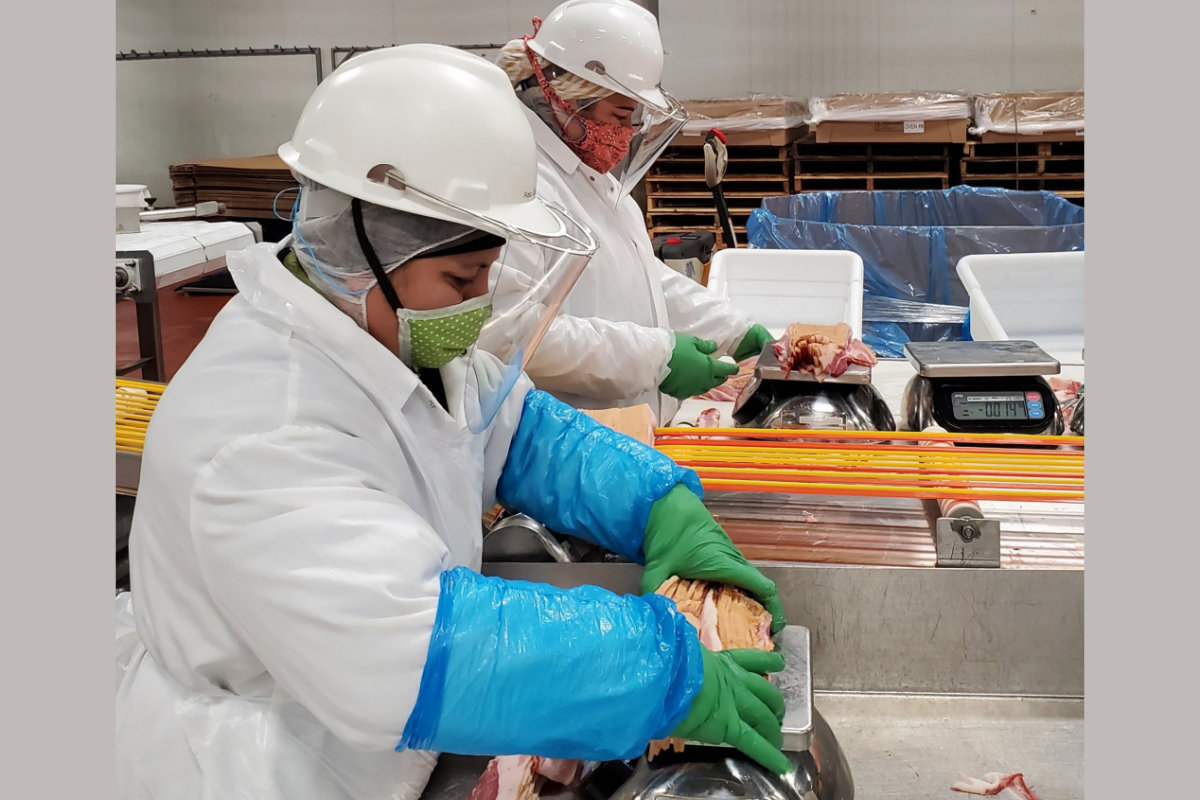 And there’s certainly no doubt that there continues to be a major demand for bacon. In fact, many people say it is the most popular meat of all. “Well, I guess that is opinion,” Jackson said with a smile. “I don’t know if it is the most popular, but it is a very popular meat and it has been around for a long time. It is certainly the most popular breakfast meat, and it has become an enhancement for burgers. In fact, bacon has become a big enhancement for a lot of foods, as well as toppings for foods like pizza and others,” he pointed out.

The demand has become so great that Monogram realized it had an opportunity to expand its bacon production. So, the Memphis-based company acquired Quality Food Processors, in Denison, Iowa, a co-packer and a major bacon manufacturer in its own right to help it meet the call for bacon. The Denison facility is now a Monogram Foods plant.

“We’ve had a pre-cooked and par-cooked bacon plant in Harlan. And Quality Food Processors has been the supplier of our bellies for bacon. So, it made sense to acquire QFP, because it gives us diversification in our bacon business. Now we’ve expanded that to raw, sliced bacon. We’re vertically integrated now, because our two Iowa plants are only 25 miles apart,” Jackson explained. 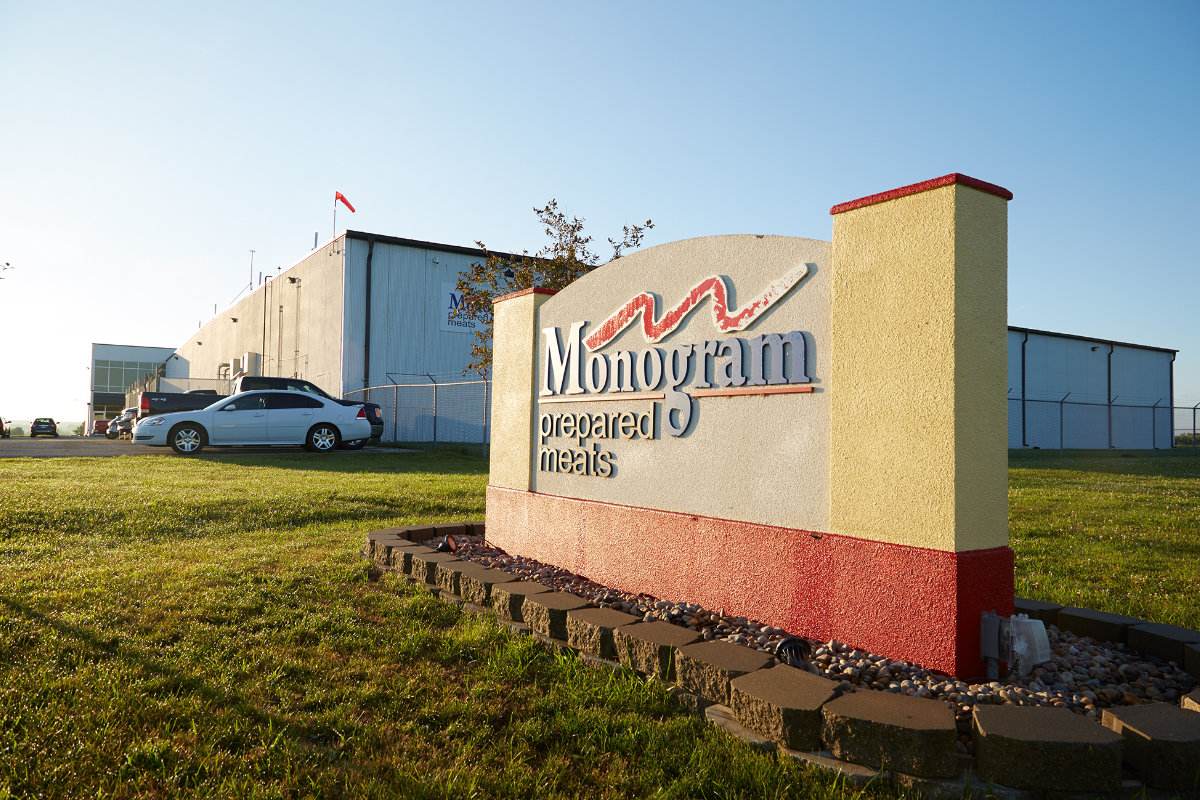 Acquiring a former supplier reflects Monogram’s longtime commitment to expanding its business by joining with companies that share similar values.

The company makes whatever kind of bacon its customers want, but it is pork bacon, pumped and cured, where the greatest demand lies.

Bacons includes retail sliced bacon, big slabs in a stack pack, which is sliced down the line. The stack pack is vertical, from a sliced belly. One pound or 12-ounce packages are the most common, with three-pound packages offering thicker slices. The company also offers round bacon for foodservice, smoked, and cured. When sliced, round and pre-cooked, the bacon is used in sandwich assembly. Bacon toppings come in different slicing dimensions for foodservice. 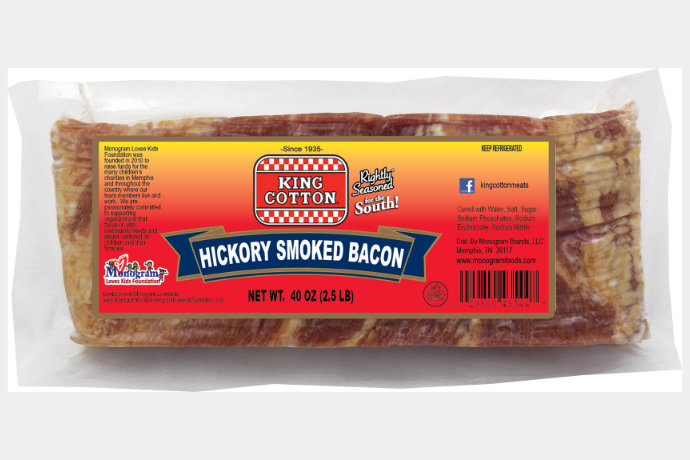 Monogram also produces retail pre-cooked bacon. “Customers like us to do the work, and why not?” Jackson laughs. The bacon is smoked and cured, otherwise it is a fresh pork belly. Smoking takes place in large Alcor ovens, with cook times set for the smoking customers want, including a variety of different smokes using chips or liquid smoke.

Slab bacon is in demand by other manufacturers. “So, we sell slabs to them, and they slice it themselves,” Jackson explained. “In fact, we used to buy slabs from Quality Food Processors.”

“When doing co-packing and private labeling, it all comes down to what the customer wants,” Jackson emphasized. “So, we make a variety of thicknesses, low-salt, sugar, and not cured, as some people might say. Of course, there is still a cure, but it can be a natural cure, with natural sulfites from celery salt or something similar.”

“Different customers have different specs for the belly size, for example. Some of them want bigger slices for retail sale, and smaller slices for foodservice,” Jackson explained. “Whatever our customers want, that’s what we give them.”