There is a revolution in food that is gaining in mass as some entrepreneurs are rediscovering ways to return to the simple preparation and production methods that have been around for generations. One needs to look no further than to Loree Mulay Weisman and her company, Longmont, Colo.-based Mulay’s Sausage, who are leading the charge toward the return to simple, wholesome, healthy foods.

The 31-year veteran of the meat processing company recalls how she and her then-boyfriend, now-husband, Ward, previously held down four food preparation, pizza shop and restaurant jobs in Crested Butte, Colo., to sustain their ski bum lifestyle.

“We had gone to New York and attended an Italian festival and tried the sausage sandwiches,” Weisman said. “I commented that they were not nearly as good as those my Nana (grandmother) made. When we got back to Crested Butte, we agreed to try and make 100 lbs of the sausage for the coming July 4 festival. We sold it all in four hours and folks were clamoring for more of it.”

A local grocer offered to sell their sausage for them, but would not make it on a long-term basis. Instead, he referred them to a nearby federally inspected meat plant that was willing to produce it for them, which was a relief since they had never stuffed sausage in a casing before that 4th of July.

Weisman, whose heritage is German-Irish on her mother’s side, said she also developed an affinity for her father’s Italian background, which dated back to the year 1326 when a relative was elected a senator from Palermo and had a family crest created. It serves today as the Mulay’s Sausage logo.

“I got to thinking about how our families raised their own animals, fruits and vegetables for their own consumption,” she explained. “The sausage was simple, there wasn’t anything added to it. There was just a quality meat base, good spices and lots of love that went into it. I don’t know that my father’s side of the family ever made meats to sell. They just strived for good quality to feed themselves. Making our meat products commercially in this tradition was not a new belief system for us.”

Saying that the founder and president of Mulay’s has a simple philosophy about food may belie the multi-talents she displays in marketing, research and development, strategic planning and as a top-of-the-line visionary.

Making a tasty, simple product line is one thing; being able to sell it is something else. Weisman sells the concept throughout the company’s line-up of German franks, British bangers, meatballs, mild, killer hot and Nana’s links and ground Italian sausage. The inventory has expanded to bulk ground sausage, bratwurst and chorizo.

Mulay’s became the first and only meat company to earn the recognition as Certified Free-From (CFF) the “Big 8” allergens, including wheat, dairy, eggs, soy, peanuts, tree nuts, fish and shellfish. They are also Certified Paleo and Keto.

To Weisman, that means not just saying something on the label, but having all aspects of the product sourcing, from the farm to the shipping dock verified annually.

She also is delighted to let customers know that there is no sugar or sweeteners in any of her products and that the salt content has been cut in half – factors she says you can tell in the taste of the product.

Weisman is also proud of her status as a certified woman-owned and family-run company. When asked about other family members involved in the six-employee business, she mentions that her husband is the senior vice president and handles ordering, production, general operations and logistics.

“I make the promises, and his job is to keep those promises,” she said.

Two daughters in college also play roles in Mulay’s Sausage. Lena assists with social media and her sister Lyza is tasked with coupon redemption chores and is the official taste tester. If an item doesn’t pass muster with Lyza, it doesn’t get sold, Weisman added.

Today, the company uses Syracuse Sausage in Texas to co-pack their products, and they do their e-commerce order fulfillment (covering 44 states) right from their headquarters and cold storage facility in Longmont. A system of distributors also moves their product line throughout the United States.

Weisman is proud that her company uses only heritage pork for its sausages and meatballs. This is obtained from about 100 small family farms, Midwest producers under a year-long contract that doesn’t change as commodity markets do.

“This guarantees these critical producers that there is a fixed price for their animals,” she said. “In that way, they can have a guaranteed income regardless of price changes in the market. Last year was tough on many of them and we increased what we paid them to sustain them in business and let them plan for future growth. And we verify that these sources are sustainably raised with no use of antibiotics...ever.”

The beef they feature is grass-fed and they are delighted to show off where their meats are sourced.

“When we started this business, we intended to go into the foodservice market,” she said. “We turned to retail to grow our volume, our name and our brand quality. We are now turning our attention to the East Coast market opportunities. We recently brought on a chief sales specialist to help with our product scale in a more strategically planned way to bring us there, and we have already made some great strides. We’re now selling to companies like Aramark and Compass-Eurest, the largest foodservice provider in the world.”

Mulay’s founder said the company began marketing on the internet in 1996 and that their name pops up quickly on sites like Amazon. More details on their marketing reach can be found on the company website, mulays.com. It is on that site that they feature videos showing interviews with the farmers detailing the “Mulay’s Difference,” what their hard-earned third-party certifications involve and what they can mean to the consumer. 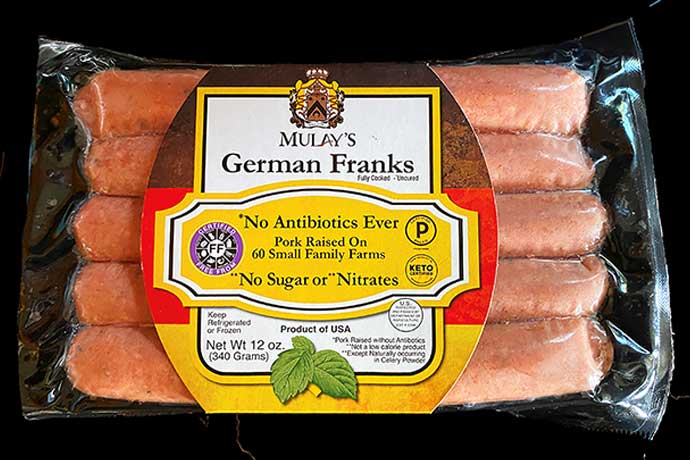 Mulay’s boasts that its German frank features ground pork and spices and a texture and taste that surprises customers.

“It’s not emulsified mush in a tube, its 100% ground pork, so delicious,” the company said.

“If there is one thing that I am most proud of, it is the fact that clean-label, clean-ingredient, simple meats can be enjoyed by the entire family,” Weisman said. “So often we hear from customers that someone in their family can’t eat certain meats because of the ingredients. Now they are telling us that the entire family can enjoy the same thing.”

If all the above information tends to put Weisman and Mulay’s Sausage in a special light among family owned and operated businesses, think about the fact that there is another entire chapter to this enterprise; it’s called community service.

Then there’s her painting, photography, golf, scuba diving – and, of course, skiing. Weisman indicates that future plans include a fifth wheel RV so she and her husband can roam the country visiting with their producers and customers, and selling their sausage and meatballs along the way.