We use cookies to provide you with a better experience. By continuing to browse the site you are agreeing to our use of cookies in accordance with our Cookie Policy.
Home » Maple Leaf Foods works toward profitability in plant-based protein space

TORONTO – Maple Leaf Foods Inc. is Canada’s largest meat processor, but the company is committed to being a leading competitor in the North American plant-based protein space and management is now guiding the business segment, which was launched through two acquisitions in 2017, which will achieve profitability in 2023 or 2024.

The Plant Protein Group business unit, which consists of the Lightlife and Field Roast brands, generated C$211 million ($168 million) in sales in fiscal 2020, driven by pandemic-fueled purchasing patterns, and 20% higher than fiscal 2019 sales. Management was guiding an additional 30% sales growth in fiscal 2021 but backed off that commitment following the release of its second-quarter earnings on Aug. 5.

For the first six months of fiscal 2021, ended June 30, Plant Protein Group sales totaled $90.7 million. Sales during the second quarter fell 21% to C$48 million ($38 million). While the business segment won’t achieve its full-year goal of 30% sales growth, management said it will achieve 30% growth during the second half of the year.

“We do expect sales growth in the back half of the year of at least 30%, excluding foreign exchange impact, and in line with our strategic target,” said Geert Verellen, chief financial officer, during an Aug. 5 conference call with analysts. “While we see a gradual reopening of the economy in both key markets in North America, there’s a lack of full visibility though on the potential impact of a fourth wave of COVID-19 on the recovery of the foodservice business.” 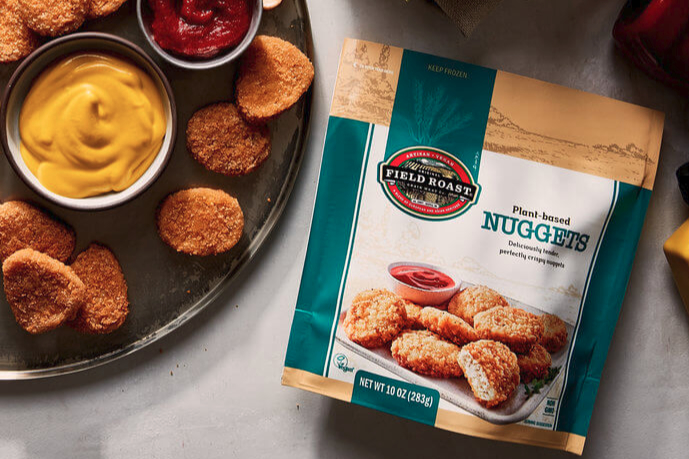 When asked about his thoughts on cell-generated protein, Michael H. McCain, president and chief executive officer of Maple Leaf Foods Inc., said, “we will participate in that over time.”

McCain called the cell-based category “immature” and in an early “development cycle,” but added that Canada’s largest meat processor is watching the category.

“There’s lots of different strategic pathways for Maple Leaf to participate, and cell-based meat is just another kind of source of protein,” he said. “But suffice to say, it’s immature.

“We will be participating in it over time. We’ve made small — very small — bets to keep our eyes, ears and learning on the table in that space. And as it develops, we will certainly be a player.”