We use cookies to provide you with a better experience. By continuing to browse the site you are agreeing to our use of cookies in accordance with our Cookie Policy.
Home » Basil Street breaks out automated pizza kitchens

CHICAGO — After more than 25 years as a Silicon Valley financial executive, Deglin Kenealy, who has a master’s degree from Stanford University’s Graduate School of Business, entered the premium frozen pizza business in 2016 when he met Roberto Villani, founder and vice president of innovation, Basil Street, Los Angeles. Assuming the role of chairman and chief executive officer, Kenealy realized early that retail did not need another pizza brand, so the food company pivoted and added “robotic machinery” to its business description.

“Automated food kiosks are accepted globally as a viable option for meals on the go,” Kenealy said. “Now, with the pandemic, the need for contact-free solutions is rising in the US. We have successfully combined America’s favorite meal with patented technology to deliver restaurant-quality food at the touch of a button.”

The 22-square-foot automated pizza kitchens (APK) from Basil Street cook flash-frozen 10-inch pizzas in about three minutes. The company owns one patent for the entire process and another is pending for the oven.

“We created an oven that cooks a pizza like a brick-oven process,” Kenealy said. “The oven opens from the bottom, where the robotic arm places the frozen pizza and then the bottom goes back up into a sealed oven. The par-baked crust gets cooked from the bottom while the toppings are cooked with convection heat. This ensures a crisp and even bake.”

Because every type of pizza should be cooked differently, the kiosks adjust times and temperatures by what the customer orders. For pizzas that include pieces of tomato, for example, an extra blast of hot air is required to ensure they are not frozen in the center when the pizza is dispensed. 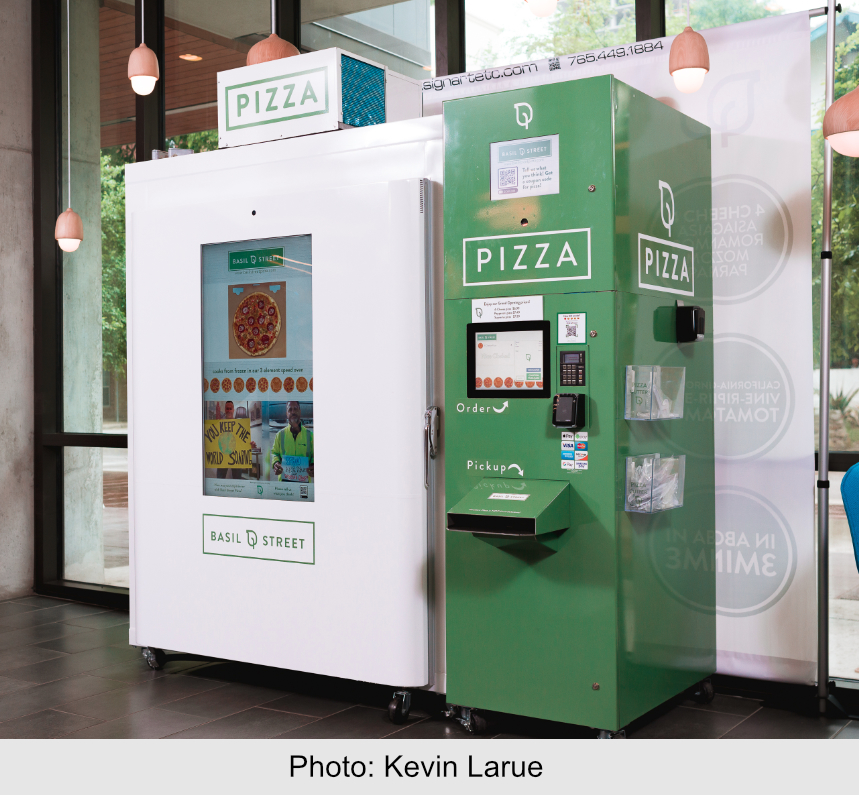 Each Basil Street APK features three different thin-crust pizzas that range in cost between $4.95 and $14.95, depending on variety and location. Selections rotate, with options including classics such as four-cheese, pepperoni and supreme, along with a breakfast variety as well as a pizza-of-the-month option. The baked pizza is delivered to the consumer in a cardboard box, complete with disposable plastic cutter. Ordering and payment can be contactless, with customers having the option to scan a QR code with their phone.

Basil Street has partnered with a Chicago-based manufacturer that produces the pizzas. The sauce is a simple recipe of crushed tomatoes, olive oil, basil and salt.

“The pizzas are flash frozen and remain frozen until they are placed onto the oven floor,” Kenealy said. “This is a critical design element from a food safety perspective. Flash freezing also helps preserve nutrients, flavor and freshness.”

Each APK holds 141 pizzas. They are restocked by the company’s partners, who also provide maintenance and cleaning on an as needed basis. 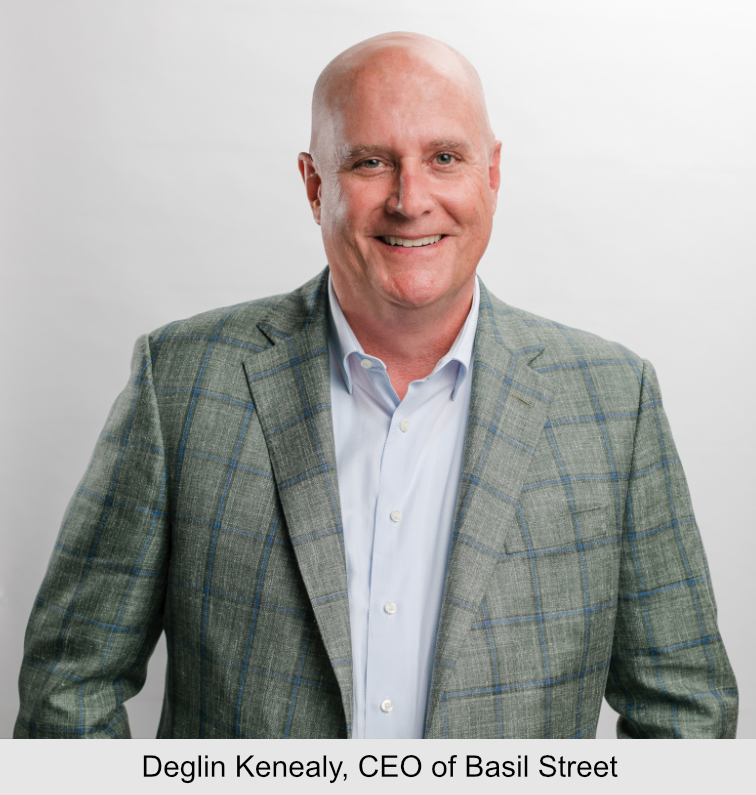 The company did not get to this point without trial and error. Following the brand’s initial $10 million fund raising in April 2020, Basil Street completed a pilot program that consisted of five APKs in California, Nevada, North Carolina and Texas.

“We received a lot of great feedback and made hundreds of tweaks,” Kenealy said. “In fact, the kiosks originally held three racks of 50 pizzas, but we learned that the machines were too high for some entry ways, so we had to shave off a few inches. That’s how we came to 141.”

During this time the company also worked with the National Sanitation Foundation, Ann Arbor, Mich., and Underwriters Laboratories Inc., Holland, Mich., to have the kiosks certified.

“It took almost nine and a half months to get these certifications,” Kenealy said. “But with them, we are now able to safely expand into all types of locations, everything from airports to universities to hospitals and private office buildings.”

There are currently seven units in the field, with plans to have 50 within the next few months. There should be about 100 by the end of 2021. Future growth will be made possible through Regulation A+ crowdfunding that was filed with the US Securities and Exchange Commission on July 26.

“We are excited to take this next step and engage our supporters to become a part of the pizza robotic community through participation in our crowdfunding efforts,” Kenealy said. “With over $47 billion in revenue generated in the US pizza industry, the opportunity to transform this market is here.”