When a great idea or a new solution evolves into launching a new business that includes the participation of another family member, there are plenty of considerations to ensure the venture is successful and that Thanksgiving dinner doesn’t erupt into a fistfight. In the case of siblings coming together to start a business, it is essential that the relationship between the two is stable.

In the past five years, family-owned businesses surviving beyond the first generation dropped to 19%, according to Price Waterhouse Cooper (PwC). Results of PwC 2019 US Family Business Survey concluded that transitioning a first-generation family business to the second generation is often challenging because for most of them, this represents the first time the founding generation has ever had to make a transition, said Jonathan Flack, US Family Business Leader for PwC. The generation one founder, in most cases, has made most of the decisions during its growth and likely hasn’t shared that responsibility, for better or worse.

“So, this is the first time a family is having to put policies and procedures in place in order to have effective decision-making,” Flack said.

Among the takeaways of the PwC 2019 US Family Business Survey, trust is a viable asset for family businesses, both with employees and customers.

“It’s very important for family businesses to codify their values into their strategic plan,” Flack said. “It ensures that as transformation occurs in the business, the roots, the values, the things that family business knows that make them unique are well embedded in that strategic plan.”

There is also an ongoing need to focus on succession planning, based on the fact that less than 20% of respondents in the survey said they have a robust, documented and communicated succession plan.

“This is not a significant change from many of the surveys we’ve conducted for the last 15 years,” Flack said, “which tells us that family businesses continue to need to make this a top priority.”

Craig Aronoff, PhD, co-founder and principal consultant with the Family Business Consulting Group, based in Chicago, said sibling business partnerships are more likely to succeed if there is an understood equality of commitment and effort. Commitment goes hand in hand with trust when it comes to growing a new family business, he said.

“A lot of times they may not know all the questions they need to answer, but they trust each other, and that’s huge; that’s a reason to go into business with somebody, because you can trust them.”

However, especially in a family business that is as labor intensive as a meat processing operation, not establishing well-defined roles and an understanding of responsibilities and equally dividing the labor can make or break an otherwise positive relationship that can ripple throughout the extended family.

A common arrangement in the meat business is one of the partners works behind the scenes in the operations part of the business while the other is the face and voice of the company, representing the company with customers and in public. Titles may be appointed at this stage of the company’s evolution, but Aronoff said those titles are largely meaningless compared to defining roles. 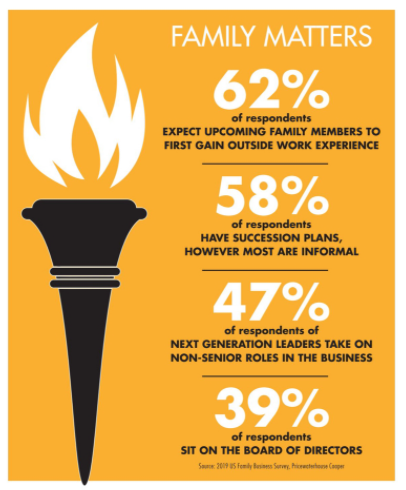 The ability to reach agreements is also critical to making a family business succeed, especially in the face of changes to strategy, new product launches, adding staff or expanding operations.

The principals need to be able to respond with a singular voice when it comes to making critical decisions that might fall between the areas of each person’s area of responsibility.

Aronoff said, “There are decisions we can make unilaterally because they affect the particular area that we’re in charge of, but other decisions we have to come together and make together, and there needs to be a good process for making those decisions. Because the first time you disagree with each other could be the end of the business if you haven’t figured that out.”

According to the PwC survey, 62% of family business leaders plan to pass the business on to the next generation. As a company grows, the approach to bringing on additional family members can be a consideration that is made more complicated if there are multiple family founders.

“When it’s a single entrepreneur, it’s really a different dynamic than when it’s two or more,” Aronoff said. “That single entrepreneur who is the owner of the business thinks, ‘I’m chairman; I’m CEO; I’m chief cook and bottle washer; I’m the owner; and I’m the dad.’ When you have it all, for better or worse, you have a lot of power and a lot of freedom.”

All that changes if the first generation of the business is led by multiple family members and the topic of bringing on other family members is broached.

“If there are two [owners] there, you’re already sharing power and freedom. So, it’s a very different dynamic.”

Bringing on additional family members who are also owners means surrendering independence for the single owner, and for the incoming family members there must be a systemic process for how control is established and how agreements are made. That transition also needs to make accountability a structural part of the business, whether the accountability is to the other owners or to a board of directors. Leadership is another part of the transition when bringing on next-generation family members.

“You have to be a credible leader. You’ve got to show that you know what you’re doing and how you’re doing it,” Aronoff said.

Part of effective leading means developing a strategic business plan and accepting that figuring out the next move based on gut feelings isn’t a viable strategy as the company grows, a board of directors is developed, and additional owners are joining the ranks. The acceptable level of risk for the first generation of a business is often higher than subsequent generations are willing to take.

Projecting realistic growth is another aspect of transitioning from a company’s founders to next-generation operators/owners. A well-planned, more modest approach to scaling the business might make more aggressive entrepreneurs who founded a company bristle at the next generations’ pensive projections.

“Although groups, that is to say siblings or cousins, certainly are interested in growth as well, but they’re much more interested in measured growth,” and taking measured and planned risks, Aronoff said.

Goals of next-generation owners tend to be based on taking calculated risks and include a strategy of liquidity and paying dividends versus being solely focused on reinvesting profit back into the business.

Aronoff proposes rhetorical questions for transitioning companies to consider, especially if some of the next generation will be working in the business and others may not: “Do you want to sustain the capital of your business to continue to grow it or do you want to take chunks of it out and provide it to your other children who are not in the business?”

He said he works with many family business founders who bring on family members, and while they say they’re operating a family business, they act entirely like it’s solely their business alone.

“Even if kids come to be employed there, when it’s still owned and run and governed by the founder it may not really be a family business at that point,” Aronoff said.

“I’ve heard of families where the entrepreneur just up and sold the business out from under the next generation who’d already spent 20 years developing careers, thinking it was going to be their business, but lo and behold, it wasn’t.

“So, you really need to think through whether you’re doing this to build wealth for yourself,” he said, “or if you’re doing this because you want to create a family business, which means trying to develop a business that will last for generations, that will continue to prosper and will spread wealth among the family that will give family opportunities.”