We use cookies to provide you with a better experience. By continuing to browse the site you are agreeing to our use of cookies in accordance with our Cookie Policy.
Home » Up to speed

During the coronavirus (COVID-19) pandemic, it is not surprising to see the priorities of consumers – when it comes to the safety of their food – are higher than ever before. Even with the introduction of vaccines and hopefully a light at the end of COVID-19’s long dark tunnel in the not-too-distant future, consumers expect food safety standards to be maintained and food companies to keep foodborne pathogens out of their meat, poultry and other food products.

This makes the testing of meat and poultry products in plants more important than ever, according to manufacturers who develop testing processes and equipment for the industry.

All food safety testing companies agree that rapid testing processes and equipment have become even more critical, with the pressures on the retail and foodservice industries stemming from the pandemic.

“There’s no doubt that the rise of much faster rapid-testing methods, over the culture methods using agar plates is making a huge difference in food safety for consumers,” said Luke Thevenet, pathogen technical sales specialist with 3M Food Safety, in St. Paul, Minn. “Molecular methods using reactions that target the DNA of specific pathogens are being more widely used as the technology becomes more efficient, more economical and faster.” 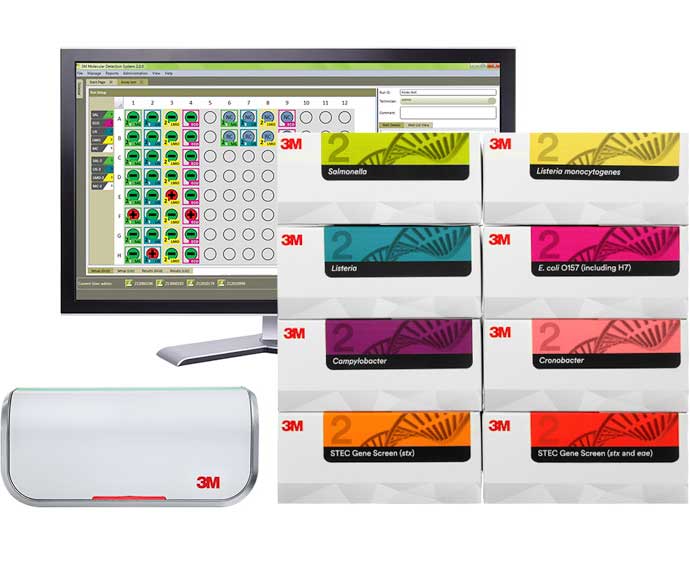 The molecular method that 3M Food Safety develops and uses is called the 3M Molecular Detection System (MDS), a process that has brought the cost of testing down.

“3M’s Molecular Detection System uses Loop Mediated Isothermal Amplification, or LAMP, technology to test for the DNA of pathogens,” Thevenet said. “The MDS system has been chosen by USDA’s Food Safety and Inspection Service to be used for testing for Salmonella and Listeria monocytogenes in poultry and meat. It’s very user friendly and efficient, and customers get more accurate results, more quickly, than by using a traditional culture method.”

Thevenet explained that traditional testing methods still have their place and role in pathogen testing. The traditional culture method still nails the evidence down.

“Rapid testing gives you a presumptive positive, but you still need to confirm that positive. And for that, you would use a culture method. In that sense, the culture is still the gold standard,” he said.

He added that rapid-testing methods are especially important when testing for Salmonella in poultry.

“The reason we don’t eat rare chicken or poultry is that it’s likely that Salmonella is still there. So, if a ready-to-eat chicken product will be going to a grocery store, the product probably will be held until there is a confirmed test result,” Thevenet noted.

Thevenet cites two benefits to testing, “We’re trying to create safe products for consumers. Also, brand security – to prevent poultry and meat brands from having to do recalls.”

Rick Kanaby, sales director for meat and poultry diagnostics at Neogen Corp. in Lansing, Mich., added, “Rapid pathogen testing technology has given to meat and poultry processors a major advantage when looking for a specific target pathogen that can cause food safety and health problems. Rapid testing technology shaves days off the time traditional methods take. Some of these methods can take up to four, five or six days for results.”

Chuck Bird, senior director of product management and marketing for Neogen, said the effects of rapid testing go beyond finding positives for target pathogens in meat and poultry products. “Rapid testing helps create and promote a food-safety culture in the processing company or business where the testing is taking place. It helps to promote a positive work environment. It is helping to train the people who work there in food safety awareness – as well as the people who run the processing companies. That’s a great benefit.”

Kanaby explained that it costs more to run samples in a meat or poultry plant by rapid methods than culture methods.

“But the great advantage is that companies can move the product faster,” he said. “What’s become faster in molecular technology is it can be done in less than 20 minutes. In a production plant, every bit of uptime is money made. Downtime is money lost.

“So for example, often you need a 24-hour enrichment process to detect pathogens. But we’ve developed a process where no enrichment is needed to find Listeria species. It is called Listeria Right Now. We get environmental results in one hour. If you can get results back in one hour, you have created a technology where you are operating ‘right in the moment.’ It has AOAC approval, a major step for rapid testing.”

Neogen also has tests for Salmonella, E. coli O157:H7 and Campylobacter, with results in 16 to 32 hours.

Kanaby noted that even with rapid testing, food safety begins with sanitation.

“You have to have a HACCP plan, sanitation standard operating procedures. The basic sanitation steps have to be there.”

He explained that meat and poultry processing leads the food industry in safety.

“That’s because it has ongoing USDA inspection. Unlike other inspection elsewhere in the food industry, where the regulators come in only when there’s a problem,” Kanaby said.

“This is a proven and safe pathogen testing method for producers, processors and food manufacturers, including meat and poultry,” Hogan said. “It offers faster time-to-results, flawless test results and all at a low cost.”

The media are effective against E. coli O157:H7, which is part of a group of bacteria known as Shiga toxin-producing E. coli or STEC; Salmonella and Listeria.

Hogan said FoodChek’s Actero Elite Enrichment Media are a good choice because inaccurate test results can cause false positives and false negatives from testing. This media is a new product created by FoodChek and is universally compatible with any food testing system.

The Actero Enrichment Media offer three distinct advantages in the bacteria growth phase available in the market today: a single-step enrichment; fastest “time-to-results”; and targeted accuracy, he said, including 30% faster for E. coli and Listeria and 70% faster for Salmonella.

“It reduces test and hold time for meat and poultry products to hours, instead of days,” Hogan pointed out. “It’s AOAC-approved and comes in six formulations: E. coli, Listeria, Salmonella and E. coli, STEC and mTSB.

“We can do Listeria in four hours; Salmonella in 10 hours; and E. coli in six hours for enrichment to take place.”

Once the enrichment is done, processors use a PCR reader to find out if there are any foodborne pathogens in the products.

“In 15 or 20 minutes, you can have sterilized enrichment media,” he noted. “And we’re looking for ways to make it even faster.”

There are two phases for achieving food safety: enrichment and then reading, with PCR. The enrichment phase is critical, Hogan explained, because chemicals must be mixed to create enrichment media.

“For Listeria, for example, we mix 11 chemicals to make our media. Rapid testing is certainly an improvement over doing cultures, which can take four or five days. And the PCR is just as accurate. And if our media is being used, it’s even faster,” Hogan said.

Rapid testing technology for foodborne pathogens for meat and poultry processors allows test results to be known by processors and slaughterers much quicker, opening the way for them to move their products to the markets. That way, they aren’t stuck holding products for long periods of time, which can affect both the freshness of products and their business operations.

“With rapid testing, we can have presumptive results and confirmation of those results, as fast as seven to 10 hours,” explained Season Xie, meat and poultry applications scientist for Bio-Rad Laboratories Food Science Division in Hercules, Calif.

“Carrying out test-and-hold requirements can be especially difficult when products have a relatively short shelf life,” she noted. “And the rapid-testing result is presumptive – there still needs to be culture reading to ensure what the testing shows.”

She also pointed out that processors must go beyond pathogen testing for food products to carry out their food safety responsibilities. HACCP food safety plans are required, as are good manufacturing practices and sanitation standard operating procedures.

“Traditionally, testing for pathogens in meat and poultry sought to find if any target pathogens, like Salmonella, Listeria, E. coli O157:H7 or Campylobacter were present, and if so, which ones,” she said. “But now, USDA has become much more interested in the quantity of pathogens – how many might be present. By enumerating the pathogens, that gives the company a much better idea of the safety of its products. It also measures the virulence of the pathogens – how harmful and severe they are to consumers.”