Anyone growing up in Eastern Pennsylvania probably enjoyed Lebanon Bologna (bologna, not baloney). The lunch meat is as common in a sandwich as turkey or ham and is found in deli counters in groceries and supermarkets, as well as in farmer’s markets, or anywhere sliced deli meat, cheese and similar sandwich products are sold.

And while “baloney” means “nonsense,” Lebanon Bologna is a smoky and sometimes sweet luncheon meat. 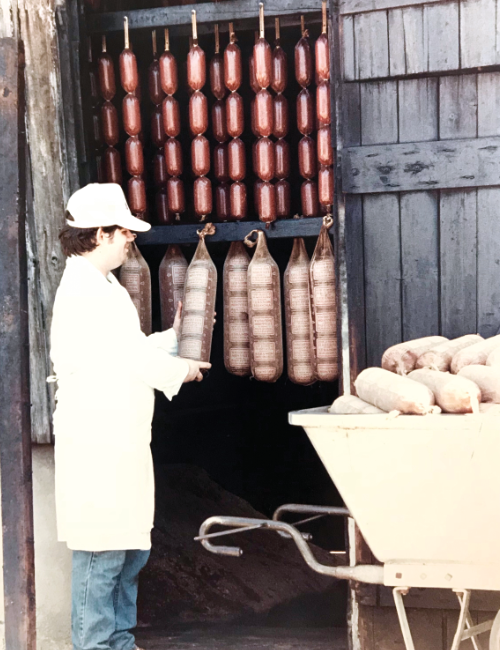 The biggest and one of the best-known makers of Lebanon Bologna in the United States is Seltzer’s Smokehouse Meats, in Palmyra, Pa., in Lebanon County. The company was founded by Harvey Seltzer in 1902, and the recipe he invented has been handed down ever since.

Setting Seltzer’s apart is that the Seltzer family continues to produce their Lebanon Bologna in the traditional way, in 12 outdoor wooden smokehouses, each 30-foot tall, over hand-tended fires – the wood coming from a local lumberyard. Each smokehouse can hold over 15,000 lbs of meat. The smoking process takes two to three days. At Seltzer’s, the meat fermentation process uses lactic acid as a starter culture.

“In the darkened smokehouses, billows of smoke pervade spiced logs of aged beef,” said Austin Wagoner, a fourth-generation member of the Seltzer family whose title is vice president of operations.

The company makes five different varieties of Lebanon Bologna – from very smoky to sweet. Jason Heilman, who is the company’s marketing manager, said Seltzer’s Lebanon Bologna is mostly sold in the Northeast United States, but also as far away as Fort Worth, Texas, Atlanta, Detroit and Seattle.

The product is believed to have been invented in the 1700s by Pennsylvania Germans who largely settled the area, possibly adopting the product style from German and summer sausages. Originally it was a regional specialty, then spread to New Jersey and Delaware. Most of the bologna was originally sold within 200 miles of Lebanon County, Pa. But now, consumers in other parts of the country have gotten interested in this meat treat. However, it is made only by a few processors in Eastern Pennsylvania. Each of the companies making it follow their own style – with different spices, for example. So, bologna from one company does not taste exactly like the bologna from another.

“I’ve taken it to trade shows and the people there love it,” Heilman said. He said there’s an increasing interest in this meat product all over the United States. “We have fans all over the country, and we do our best to sell it in as many places as possible.”

The company’s goal, Wagoner said, has been to transfer Lebanon Bologna from a regional food to a product with much more mass appeal.