We use cookies to provide you with a better experience. By continuing to browse the site you are agreeing to our use of cookies in accordance with our Cookie Policy.
Home » Turkey bacon maintains its popularity

Since the craze for bacon shows no signs of letting up, it’s not surprising the number of types and varieties of bacon available on the market continues to grow. One of the fastest growing varieties is turkey bacon.

Butterball LLC, based in Garner, North Carolina, is the world’s largest turkey producer, producing more than 1 billion lbs. of turkey a year. Not surprisingly, the company, an iconic name in turkey, is the biggest producer of turkey bacon and has been expanding its production of this bacon variety. A $20 million project at Butterball includes a new production line for turkey bacon in Raeford, North Carolina, which has taken over the operations formerly held by the House of Raeford brand. This is where all of Butterball’s turkey bacons are made and is a very important part of the company.

“Turkey bacon is a form of bacon prepared from chopped, formed, cured and smoked turkey, so it’s different from typical bacon, because there’s no belly on a turkey,” says Kyle Lock, senior director for retail marketing at Butterball. Why has turkey bacon taken off in popularity the way it has? “Well, we market it as a low-fat alternative to pork bacon,” Lock says. “And there’s also a demand for turkey bacon as a substitute for bacon where religious restrictions people follow forbid the consumption of pork.”

But what may be a surprise to many people is that turkey bacon is not a new product that came about with the takeoff in bacon popularity. Actually, turkey bacon has been around for a long time. “I’ve been in the turkey business for more than 25 years, and we were making turkey bacon back in the 1980s,” Lock says. “The idea has been to make the appearance and what it’s like to eat similar to pork bacon. We mix light and dark turkey meat, and it’s cut in strips like bacon. There’s a swirl of different colors, like pork bacon, but the ingredient, of course, is turkey.”

Lock says a lot of consumer research was carried out by Butterball in order to come up with the idea of turkey bacon. “It served the needs and desires of consumers back when we began making it, as well as now in 2019. Turkey bacon is better for you health wise – it contains 68 percent less fat than pork. In addition to being lower in fat, it’s lower in sodium, which is a health concern for many people today. All these health concerns go back to the 1980s, when people began asking, ‘What is a healthy diet?’ People wanted to reduce the number of calories they were taking in. In turkey bacon, there are fewer calories than in traditional bacon.” 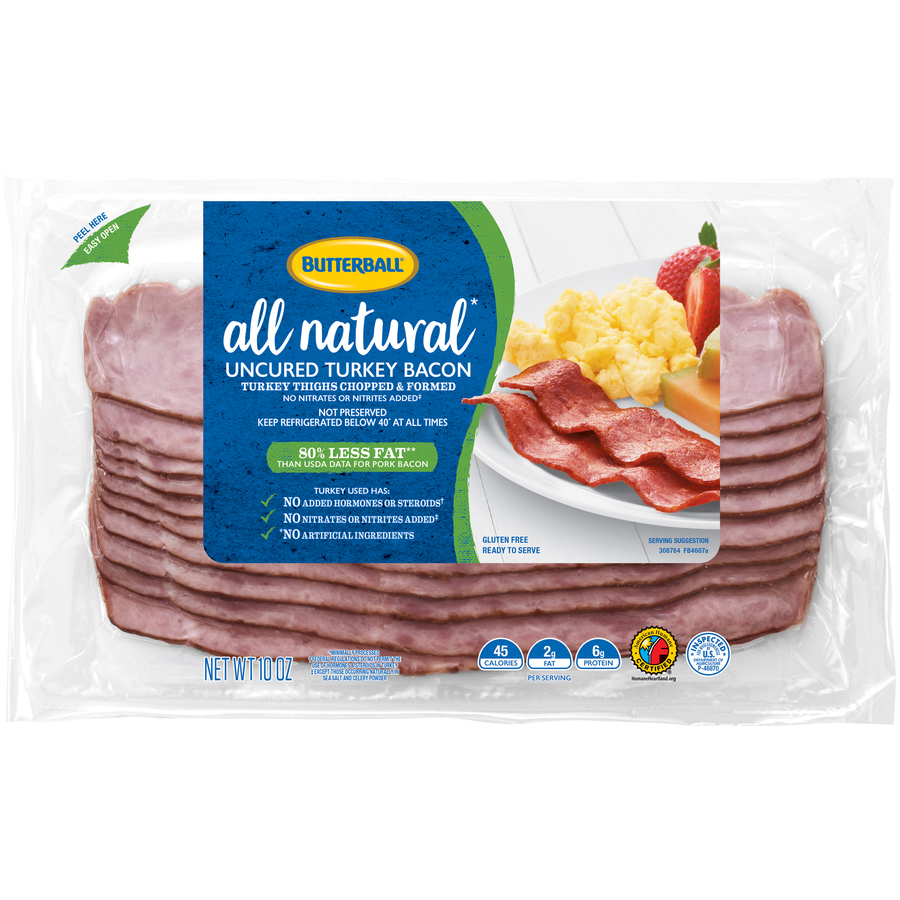 Lock says turkey bacon is unique and has become a big market because the product ties together the cultural phenomenon of bacon with eating healthy. “So, you can have the best of both worlds,” he says. “Some people think pork bacon is salty and greasy, and of course, turkey does not contain a lot of fat, so that’s certainly helped turkey bacon’s appeal.”

Then there’s the religious issue. “For religious reasons, some people don’t eat pork. And it’s not just Jews and Muslims. There are other people who for various reasons don’t want to consume pork. This way, they can still have bacon on their plate – bacon and eggs, bacon on their burgers, wherever they want to have bacon,” he says.

Turkey bacon is not made with just one cut from the animal, like bacon being made from pork bellies. “We actually form a ‘belly’ of sorts from the parts of the turkey, light and dark meat,” Lock says. “Then we cook it, slice it, and package it, just like regular bacon.” But like other kinds of bacon, Butterball makes five varieties to appeal to consumers who want turkey bacon: Original Turkey Bacon, All Natural Uncured Turkey Bacon, Thin and Crispy Turkey Bacon, Lower Sodium Turkey Bacon, and Fully Cooked Turkey Bacon. 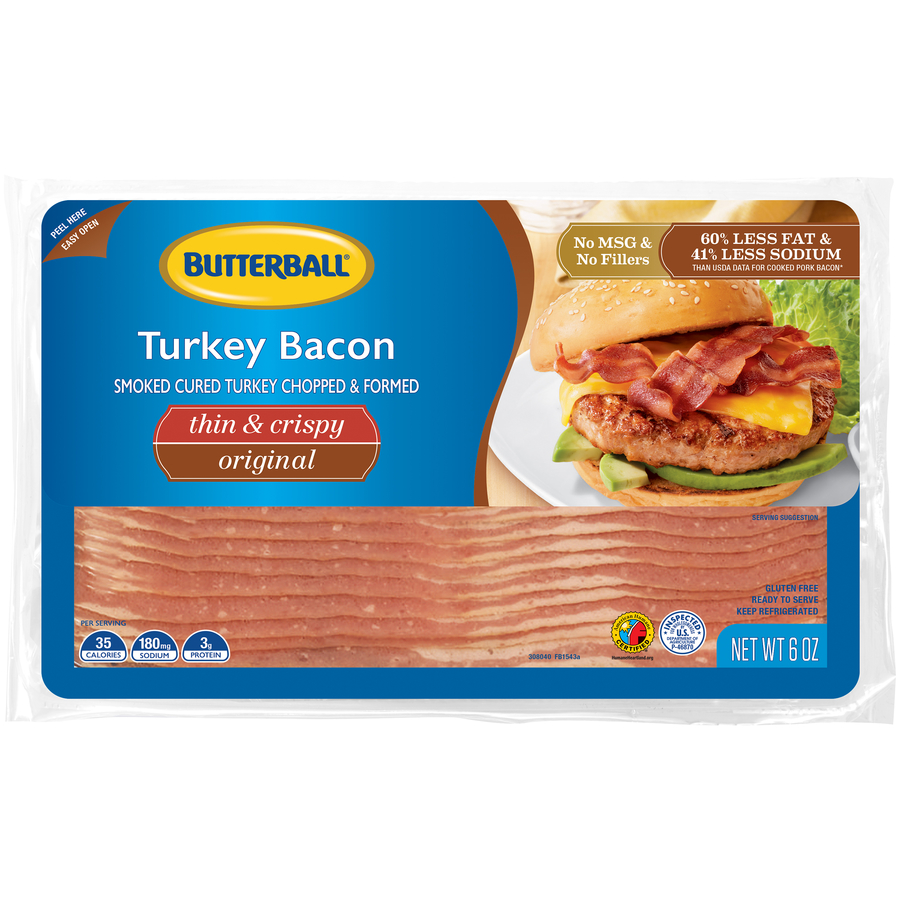 “We’ve made the Original Turkey Bacon for a long time,” Lock explains. “It contains 65 percent less fat than regular pork bacon. The Thin and Crispy Turkey Bacon is sliced extra thin like a traditional bacon. The All Natural Uncured Turkey Bacon has no added hormones and no added nitrates or nitrites. The Lower Sodium Turkey Bacon contains 40 percent less sodium and is offered in the regular and thin and crispy varieties. The Fully Cooked Turkey Bacon is very popular for people who don’t want to go through the cooking process, and in in foodservice,” he points out. Butterball sells a lot of its turkey bacon to foodservice customers, but more in retail, Lock says.