We use cookies to provide you with a better experience. By continuing to browse the site you are agreeing to our use of cookies in accordance with our Cookie Policy.
Home » Meat sells at first sight

Dented cans, smashed boxes, faded meat and poultry, these are all reasons to put a product back on the shelf after picking it up during a grocery trip. All it takes is one look. And while these aesthetic observations are not necessarily indicative of quality or safety, they often are reason to send the product to the department of misfit foods.

“Retaining color is imperative to a product’s freshness appeal,” says Jerry Moehn, senior meat technologist with Wixon, St. Francis, Wisconsin. “When faced with the choice between a bright, vibrant, oxygen-rich product and a pale, oxidized product, consumers will naturally gravitate to the bright, vibrant product.”

Amanda King, technical manager with Kemin Food Technologies, Des Moines, Iowa, says, “Consumers view color as the determining factor in the quality of meat and poultry. They expect fresh meat to be bright red, cured meat to be light pink and ground poultry to be light or dark pink.”

Lamb is a darker cherry-red than beef, while raw pork has a grayish-pink hue. Raw whole muscle poultry can vary from a bluish white to yellow, with a hint of pink, with color closely associated with the bird’s diet.

“Any variation from these colors deters the consumer from buying the product,” King says. “Therefore, it is imperative for manufacturers to prevent color loss in their meat and poultry products in order to keep consumers coming back for more.”

Ron Ratz, senior vice president of Wixon says, “Preserving color is vital to processors as it’s a point of brand differentiation, especially in the retail sector.”

With so many products to choose from, appearance, and of course price, are serious purchase considerations. In fact, according to the 2018 Power of Meat study, price-per-pound has the highest influence on the ultimate meat and poultry purchase. Only appearance comes close to the importance of price.

“While meat coloration gets consumers to initially purchase a product, the consistency and stability of the product’s color is essential to category leaders whose customers expect the same product from purchase to purchase,” says Zak Otto, senior research and development manager at Wixon.

Austin Lowder, applications scientist with St. Louis-based DuPont Nutrition & Health, says, “The shelf life of a meat product, whether fresh or cooked, can be extended by delaying discoloration, thereby reducing the number of markdowns, consumer complaints and product returns to the processor.

“All classes of retail and foodservice meat products can suffer from discoloration to some degree,” Lowder adds. “The highest impact area for color stability, however, is in fresh red meats, especially ground beef.”

The science of red color

The reddish-pinkish color associated with most product is formed when myoglobin in the meat is exposed to oxygen. This converts the myoglobin (blue) to oxymyoglobin (red). Think how enclosed veins are blue and exposed blood is red. Different species of meat have different concentrations of myoglobin in their blood, which is why there are varying intensities of red in meat.

Beef, for example, has about four times as much myoglobin as pork. With poultry, the white meat is virtually void of myoglobin while dark meat gets its name because of its myoglobin content.

“The color of meat is determined by the ratios of the forms in which myoglobin can be present,” King says. “Stable oxymyoglobin imparts the bright red color that is considered a mark of freshness, and is formed and maintained in an oxygen-rich environment. Over time, the continuous oxidation transforms the myoglobin into metmyoglobin, imparting a brown color, a cue to consumers that the meat is no longer fresh.”

Fresh beef, because of its high concentration of myoglobin, may show a greater observable difference between oxymyoglobin and oxidized metmyoglobin. Ground beef, as is, or formed into patties, is even more susceptible to discoloration. When flavorful ingredients are added to make gourmet burgers, discoloration risk increases.

Given the unlikelihood of finding a single compound that performs all the functions of synthetic antioxidants in complex food matrices such as meat and poultry products, more than one antioxidant is often used to increase efficacy against different mechanisms of oxidation. Alessandra Pham-Mondala

“The process of grinding introduces oxygen throughout the product,” King says. “Inclusions such as cheese, bacon, visible dried or fresh herbs and spices, bring additional complexity and pro-oxidants into the system.

“Pork sausages, especially fresh dinner sausage and breakfast sausage marketed in clear film with view of the product, are especially susceptible to discoloration because of exposure to light,” King says. “Also, many of these products are frozen during distribution. This may further contribute to oxidation.”

“Color stability in further-processed meat products, such as dry-fermented type sausages, is just as important as color retention in fresh meat products,” she says. “These products are highly susceptible to oxidative changes, especially when sliced and stored.”

Think sliced-to-order deli counter meats as well as the sliced meats used in packaged sandwiches. Many of these sandwiches sit in open refrigerated cases in gas stations and convenience stores where they are exposed to bright lights and temperature fluctuations.

There are many technologies to assist with slowing color loss. This includes modified atmosphere packaging, reducing exposure to in-store lighting and addition of ingredients that stabilize desirable color. There are conventional generally recognized as safe (GRAS) additives and clean-label options.

The most common solution is the addition of antioxidants, which slow or retard oxidation of myoglobin by sacrificing themselves to the oxidation process. Butylated hydroxyanisole (BHA), butylated hydroxytoluene (BHT) and tertiary butylhydroquinone (TBHQ) are well-recognized antioxidants and have long been used to preserve color in meat and poultry. Because of their chemical, synthetic nature, many of today’s processors are turning to the growing number of more label-friendly options in the marketplace, namely plant-based extracts from rosemary, green tea and acerola cherries. They can be used alone or combined in synergistic blends, often designed for specific applications. They may be identified by name or often a simple declaration of “natural flavor” in the ingredient legend.

“Given the unlikelihood of finding a single compound that performs all the functions of synthetic antioxidants in complex food matrices such as meat and poultry products, more than one antioxidant is often used to increase efficacy against different mechanisms of oxidation,” Pham-Mondala says.

The underlying principle behind this strategy is that when added together under optimum conditions, the different antioxidants exhibit additive or synergistic interactions for enhanced effectiveness. This results in lower usage levels and potentially some cost savings, as compared to using one clean-label antioxidant alone.

King says, “The ascorbic acid in acerola extract works as a reducing agent. It helps keep the iron in myoglobin in its ferrous (reduced) state. Once it’s oxidized to a ferric state, the meat appears brown.”

In addition to preserving color, antioxidants perform other functions. Acerola extract, for example, also acts as a cure accelerator in natural cure formulations.

Lipid oxidation can lead to foul odors and off flavors. This is not observed until the package is opened at home, resulting in consumer dissatisfaction that can damage a brand or retailer’s reputation.

“Texture may also be impacted, as oxidation will cause physical crosslinking of proteins that eventually makes the meat tougher to cut and chew,” Lowder says. “These factors can lead to a negative sensory experience for the consumer. Utilizing antioxidant ingredients protects the sensory quality and improves shelf life through multiple avenues.” 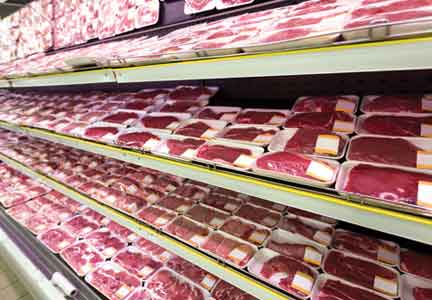 When identifying the best antioxidant blend and use level, the processor must take into consideration the desired shelf life. This includes time in distribution, the possible number of days sitting under retail lights as well as the number of days the consumer may want for home storage.

In addition to plant extracts, certain spices, fruits and vegetables are associated with preserving the color of meat. Dried plum ingredients are such an example. Not only are they a source of antioxidants, they contribute to a desirable red hue. Thus, they can be used to enhance color, often in conjunction with other ingredients.

There’s a trend with incorporating finely diced or chopped mushrooms into ground meat matrices to make lower-fat, flavorful burgers, meatballs and other meat dishes. Though the mushrooms have not been shown to exert any antioxidant coloring-preservative effect, they do contribute a desirable brown color to both fresh and cooked ground meat products. Thus, they provide another way to improve the appearance of meat and poultry.

“Known as ‘super spices,’ both annatto and turmeric not only provide vivid orange-red and yellow colors but have strong antioxidant properties and benefits,” Otto says. “Paprika and beet juice powder may also be used in fresh and fully cooked products to impart color in applications such as Italian sausage and topical rubs. We can combine these ingredients with natural antioxidants to slow down the rate of fading.

“Per US Dept. of Agriculture guidelines, if an ingredient is used to impart color it has to be labeled as such on the ingredients panel,” Otto says. “These regulations have been used for the past 20-plus years to ensure transparency between producer and consumer.”