“You gotta do this,” his hunting and fishing buddies told him repeatedly. “You need to open a Cajun-style meat shop” in the Texarkana, Arkansas, area where people enjoy the great outdoors. After a few years of coaxing and pleading from family and friends, Lagniappe Specialty Meats was born.

For Bobby Duhon, the meat business in Maurice, Louisiana, was in the rearview mirror after his father sold the family plant. The place where he worked with his dad from the age of eight had been sold and later failed under the direction of new owners.

It was hardly two years into razorback country before Lagniappe Specialty Meats regularly began drawing Cajun meat lovers from as far away as Dallas and Little Rock, and, of course, plenty of those Southeast Louisiana folk who want that taste of home when they travel up to Arkansas.

Lagniappe is pronounced “lon yop” and it translates to “something special,” which is appropriate for what has blossomed into a combination specialty meats shop featuring premium cuts and a retail store and plated take-out hot luncheon deli meals that smack of all things Cajun. 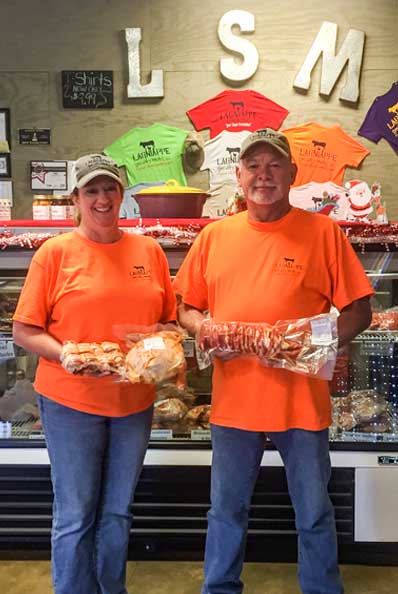 Name the meal...turducken, shrimp or crab stuffed etouffee, and even staples like gumbo...and see that this place exemplifies Acadiana.

Their website, lagniappespecialtymeats.com, is as tasteful and enticing as the varied dishes and meats itprepares.

“We love the shock on their faces when new customers come in and they are amazed by what we have for them and the quality of what they can’t find anywhere else in the region,” Duhon beams. “They feel what is a genuine feeling that we are glad and excited they are here. The next time we see them back they are bringing coolers to fill for their freezers, their friends and their families.”

The 61-year-old owner shares responsibilities with his wife Christina, who also helps with cooking, ordering, stocking shelves, filling orders, taking care of accounts and bills...and did we mention that she is also the chef?

Duhon says there is a secret to “real Cajun” cooking and making meats.

“The real secret is that there is always something different about every specialty meat or dish we make. No two are ever alike. My father was called the ‘black pepper king’ for his extreme use of seasonings. I guess that’s something he passed along to me. But in truth, you have to use really good and consistent quality in the seasonings. We make some of our own and some we buy from vendors and doctor them up a little bit. Now that makes it real Cajun.”

Duhon elaborates a tad about his success through making some sophisticated meals that can be simply prepared in an uncomplicated way at home.

“Some days it’s turducken,” he offers. “That’s the chicken wrapped in a layer of turkey, pork stuffing, duck breast, pork stuffing, chicken breast and then cornbread stuffing and then all sewed up. Then we may also stuff sausage, shrimp, crawfish, or other varieties of items we think they might like.

“You know when I started the meat shop here, I figured everyone looking for Cajun meats would want boned duck or chicken. Here in Arkansas I was surprised that they wanted so much in beef and pork filets.

Duhon whips up so many meats and flavors of the Cajun stripe that he always seems to hold a surprise or two for customers. He may feature deep-fried Cajun turkey, boudin stuffed pork chops, seafood ranging from jumbo Gulf shrimp to oysters or catfish. His andouille is as authentic as they come. But if it’s alligator filets, gator or frog legs you seek, you’ll find them inside the shop as well.

Not long ago they began serving a take-out lunch that has grown to about 50 meals a day, sometimes topping 100. He warns customers on his billboards, website and the Facebook sites to “get here early before we run out.” He genuinely treats his customers like they’re coming to dinner. The lunch crowd knows he only serves those meals Monday through Friday. 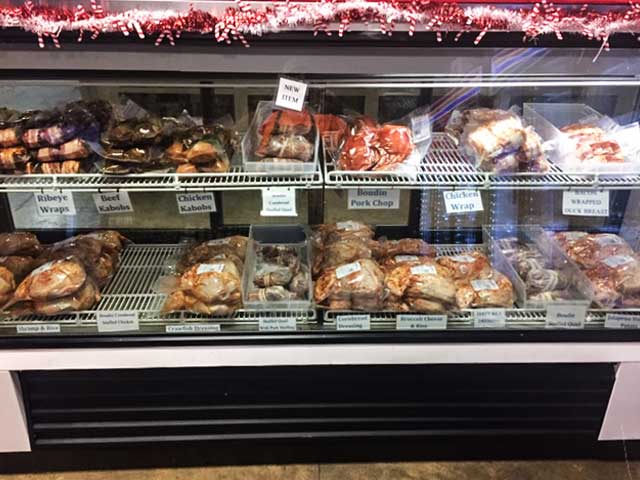 The specialty meat shop operates under state retail store inspection and is located just off Interstate 30 but ships its products across state lines to eager customers.

Lagniappe isn’t fancy in its equipment, with Bobby attesting to the fact that most of it was purchased second-hand and does the job. He and his wife operate the business along with eight employees.

Catering is one area where they find themselves in a normally unenviable position of not knowing what they’ll have available very far out.

“Sometimes we have to let customers know our menu might be changing in a day or two,” Duhon notes.

“We’ll let them know of a couple of beef, pork, poultry or seafood options we will have available on the day of their event. Most will stop by to pick up their order, but for some larger events we’ll bring the food to them. We slow things down in catering after the fall begins, but there are always special days or holidays when they want us to prepare food for their special event and we try to accommodate them.”

He admits that he still has a crawfish pond farm in Louisiana but prefers to buy his own locally because of the shipping costs and constraints.

Social media is abuzz about the shop and its dynamic offerings and selections, including gift box ideas. Duhon found it to be advantageous to offer gift certificates promoting foods from Cajun Country rather than to limit the value to one specific item. He claims it offers them more variety and often customers will spend more than the value of the gift certificate they received.