Children ages 4 to 12 were eligible to compete in three separate age groups – 4- to 6-year-olds, 7- to 9-year-olds and 10- to 12-year-olds. Each contestant was given the task of making a creation out of the food supplies provided including lunch meat, hot dogs, cheese, bread, olives and vegetables. A “weiner” from each age division was chosen. 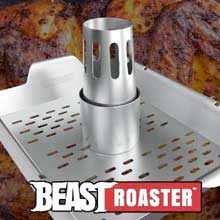 Consumers looking for better-for-you beer can chicken might consider the Beast Roaster from Grill Beast.The Beast Roaster is a stainless steel vertical chicken roaster that simulates the beer can chicken cooking method of roasting chicken. What’s missing – besides the beer can – is BPA, a chemical that prevents foods reacting to aluminum and that has been the subject of health concerns.

“Although there are differing studies and opinions regarding the amount of BPA that may leech into your food from an aluminum can, and the health risks associated with BPA, why take that risk?” says Grill Beast founder, David Johnson.

“It’s a little like ‘Indiana Jones and the Temple of Doom.’ We’re kind of at full capacity right now, and we’re trying to figure out how we take the gold idol and get the sand on there at the same time, just a perfectly equal balance.” — Gordon Klemp, founder and president of the National Transportation Institute on rising freight costs during a presentation at Sosland Publishing Co.’s Purchasing Seminar

WeWork Cos., a provider of shared workspaces and other services, will no longer pay for any red meat, poultry or pork at WeWork events and won’t allow employees to expense meals including meat, according to a Bloomberg report. In response to this type of policy in the workplace, the North American Meat Institute (NAMI) is offering resources on its new IChooseMeat.com website. Among the resources are “Top Ten Ways to Sneak Meat into the Office” and “Best Excuses to Get Out of Your Office’s Meatless Lunch.”