We use cookies to provide you with a better experience. By continuing to browse the site you are agreeing to our use of cookies in accordance with our Cookie Policy.
Home » Yum! Brands tweaking delivery model for KFC, Taco Bell

LOUISVILLE, Ky. — Already owning delivery experience through its Pizza Hut brand, Yum! Brands Inc. still is in a yellow-flag, cautious mode when it comes to delivery for Taco Bell and KFC. A scaleup in the marketing of delivery services for those two brands could get the green light soon, though.

Louisville-based Yum! Brands and Grubhub, an online and mobile takeout food-ordering company, announced their partnership in February to drive incremental sales to KFC and Taco Bell restaurants in the United States. The partnership is still in its “early days,” said Greg Creed, chief executive officer of Yum! Brands Inc., in an Aug. 2 earnings call to discuss second-quarter financial results.

Yum! Brands wants to get the delivery integration done right and test it before unleashing marketing dollars, Creed said.

“We’re fairly sophisticated when it comes to the subject of delivery,” said David W. Gibbs, president and chief financial officer for Yum! Brands. “We know delivery well from our Pizza Hut business. So, getting Taco Bell and KFC in, we have very high standards for where we want to ultimately get to … We’re pleased with where we’re at right now on the journey. We know what ultimately the kinds of times and accuracy that you need to deliver in delivery. We’re not there yet, but we’re on that path to getting there with Grub right now.”

Chicken delivery issues in the second quarter forced some KFC restaurants in the United Kingdom to go without chicken for a short while.

“All of our stores in the UK opened for business offering their full menus beginning mid-May, with advertising beginning at the end of May,” Gibbs said. 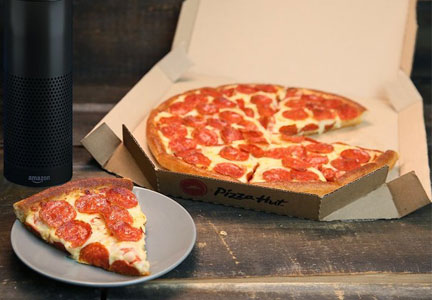