It’s both a look back at meat industry history and an out-of-the-way location where shoppers can find and take home perhaps the most genuine in Cajun and Southern meat specialties available anywhere.

The retail meat processing house is known as Bourgeois Meat Market, located in Southern Louisiana in the quiet community of Schriever along Bayou Terrebonne. It features traditions that reach back to the founding of the family business in 1891.

Beau Bourgeois, the 35-year-old, fourth-generation owner and manager of the business, remembers coming into the shop to work alongside his father at the age of six.

“I’m sure I wasn’t much help at that age, but I was always watching and learning,” he said. “When I turned 12 years old, I must’ve been enough help to actually get paid. But I learned and never forgot that this was a family business that had a cultural heritage and legacy. I wanted to keep those values and pass them on to my three children (with another on the way) who I hope will be the fifth generation to run this business.”

The meat enterprise began more than 130 years ago when Beau’s great grandfather, Valerie Jean-Batiste Bourgeois, started slaughtering one pig or cow at a time, cut it up and deliver the meats house to house along the bayou by horse and carriage. It was not until the 1920s when refrigeration was introduced that he opened a storefront shop next door to the family home and made his own hog’s head cheese, boudin, smoke sausage and a few other local favorites.

Valerie passed the shop on to his son Lester when he returned from fighting in World War II, and Lester made the decision to move the shop and slaughter facility across the street to Bayou Terrebonne. Lester died a year ago at the age of 96, but not before he had turned management over to his son Donald in the 1980s. Donald’s son, Beau, took over in 2018, but was there years before that to help and later oversee as many as five different expansions to the plant.

“With all the expansion, there was really no modern design to the building. As we got busier over the years, the inefficiencies of the building design started to show and get worse as we grew the business,” Beau said.

“A few years ago, we began to make plans to open a second, more modern facility in Gray, a town about five miles down the bayou, along Interstate 90,” Beau said. “COVID-19 wreaked havoc on those plans and we found ourselves shorthanded and unable to maintain the strong workforce we are accustomed to. We also had a Mustang crash into the front of the shop at 50 miles an hour. Luckily, there were only minor injuries, and our neighbors came over to help us clean things up. We were able to reopen the next day. Then there was the April 2020 thing known as Hurricane Ida, which absolutely devastated our town. I’ve gone through Hurricane Katrina, but it was nothing like Ida for our community.”

Beau explained that after a two-year delay, he and first cousins Shane and Brody agreed that they should pull the trigger on plans for the new facility, which will have nearly 9,000 square feet of space and is set to open in early 2023. 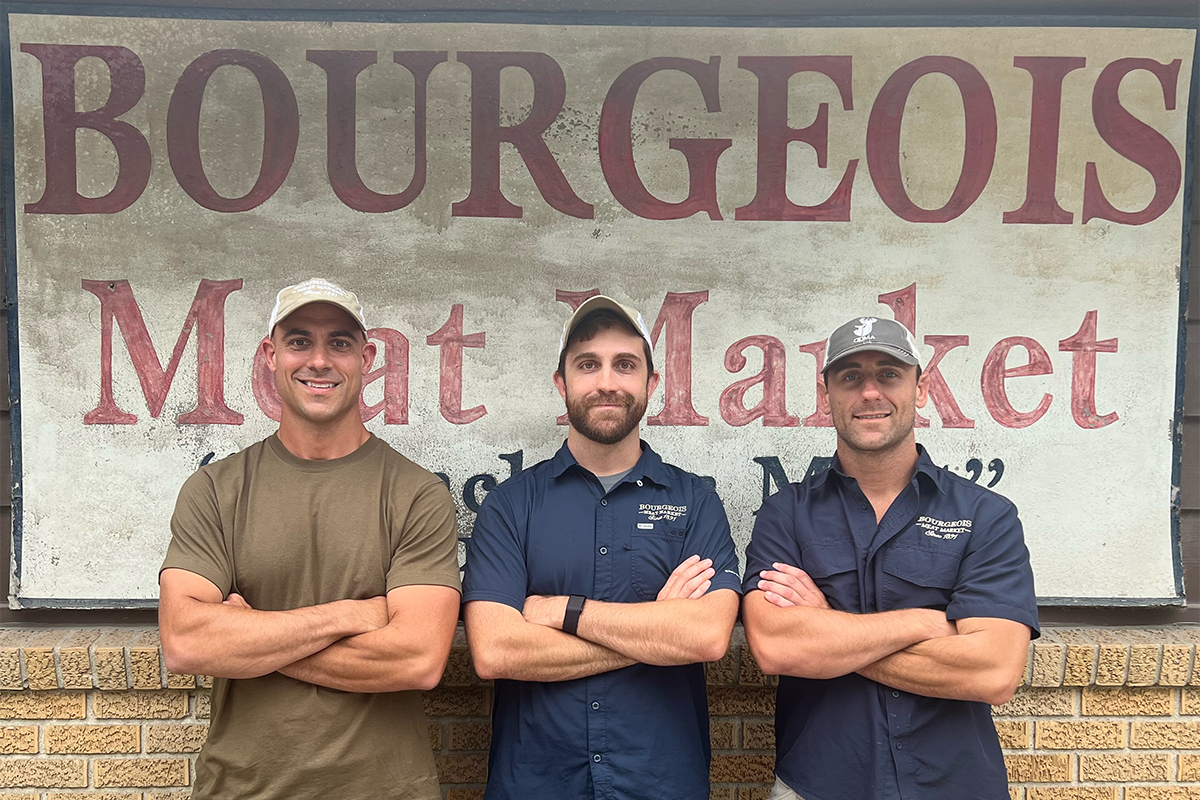 With higher interest rates and the cost of building materials soaring, what is it in the Bourgeois Meat Market mindset that is driving this leap into expansion to a second, twice as large, new facility? Beau explained:

“When my dad, Donald, was in line to take over the business, my grandfather Lester had warned him about trying to expand the product line because they were too busy to take on new things.”

Despite the cautioning, he experimented with making some beef jerky in the early 1980s for himself and some friends. He passed along a sliver to a customer named Chick Breaux, a silver-tongued salesman who sold cranes to oil companies offshore in the nearby Gulf of Mexico.

“Mr. Chick said the jerky was so good that he asked him to make him some of it. He turned 20 lbs of round steak into a smoked Cajun jerky. Mr. Chick returned the next week and wanted another 20 lbs. He was using the jerky strips as a personal calling card to get into the oil field offices. Six months later my dad began making 10-lb batches for his regular customers.”

Today this small family shop turns out 1,000 lbs of jerky a week.

The company slogan reads “Miracles In Meat Since 1891” and this latter day jerky was rated No. 1 in Garden & Gun magazine’s feature titled “100 Southern Foods You Absolutely, Positively Must Try Before You Die.”

Another journal (Taste of the South) lists the virtually hidden shop in its list of “The Absolute Best Meat Markets in the United States.”

“We really don’t do much advertising,” Beau pointed out. “We go to some sports shows and enter some local competition cook-offs and similar contests, but the word has gotten out about what we have, and customers keep coming back for more.”

While the Cajun beef jerky is the linchpin of the Bourgeois Meat Market product specialties, a look at the shop’s website will introduce visitors to some others such as their fixings and recipes for andouille gumbo, shrimp and tasso pasta, mock turtle soup, white boudin and boudin burritos, crawfish boudin, summer sausage, spicy turkey cheese, many other sausages from their inventory, and a little about their Slap ‘Ya Momma Jambalaya. They also make many of their own seasonings and sauces. Beau regards the shop as old-fashioned in many ways. He said there are not a lot of pre-packaged products sold at the store, but the service counter staff will eagerly cut fresh meats or wrap items like sausage or cracklings precisely to the customers’ specifications. Even pets seem to like the treats the shop offers. 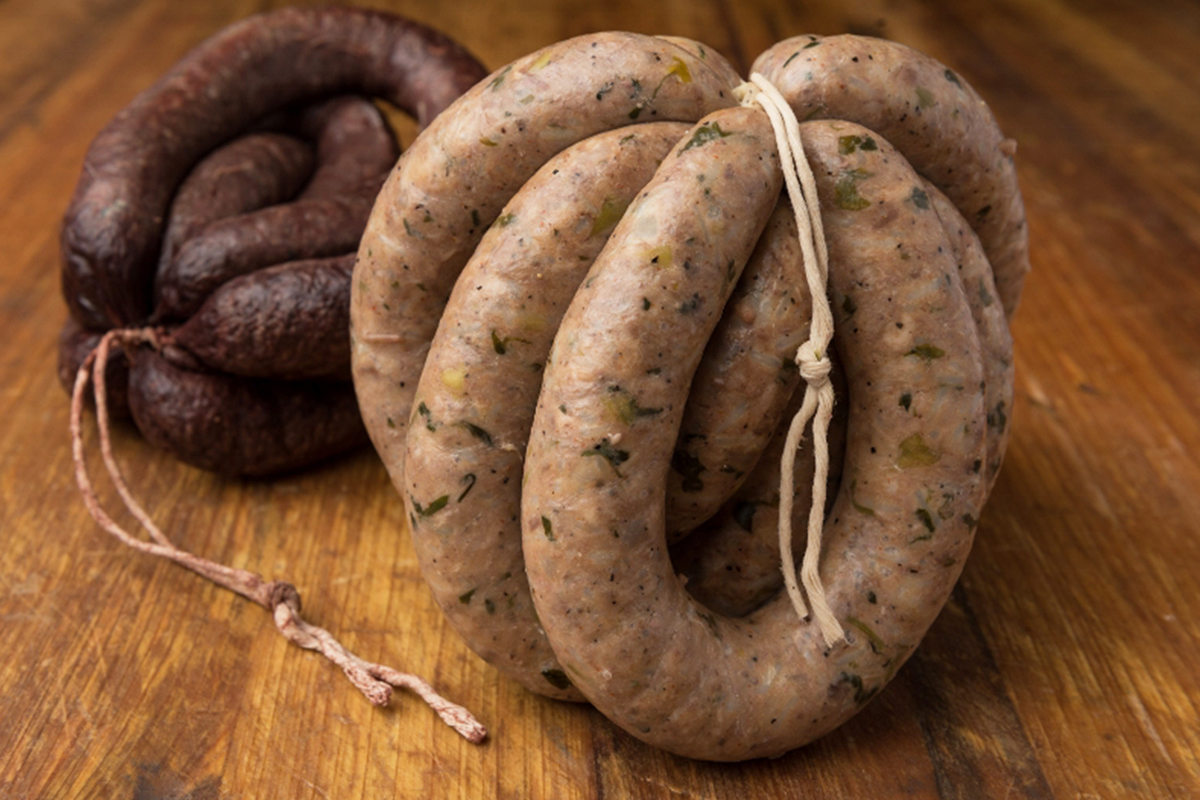 White boudin is made from pork roasts simmered in a black iron pot then flavored with vegetables, rice and seasoning. The mixture is stuffed into a natural casing. (Source: Bourgeois Meat Market)

The family-run shop operates under Louisiana state inspection as a retail store, but also takes in plenty of wild hog and deer from hunters who want their game meats turned into those Cajun specialties. And their assortment of gift boxes offers authentic Cajun cuisine and are seamlessly shipped during the Thanksgiving and Christmas holidays.

The business employs 30 workers and will be hiring about 65 more to help staff the new facility in Gray. That operation will have a kitchen for plate lunches as well as an expanded menu of hot food items from the shop. Beau said they will also focus on more pre-seasoned products that customers can take home and cook without much preparation. He said many of the ideas for new products are based on recipes family and employees use to make meals for themselves and those ideas are adopted by the store.

Beau reflected on where many of the Bourgeois signature recipes came from, commenting that he asked his grandfather about their origin and was told that he just tried formulations and spices until products tasted right to him and wasn’t surprised when customers liked them as well.

“It’s hard work the way we make things here,” he said. “We light fires and keep them going all day. We don’t take shortcuts. Some of the new equipment on the market would make things easier, but we’ve been doing things the old-fashioned way for over a century, and, you know, it seems to still be working.”