Chappell Hill, Texas, a small town off US Highway 290 about 60 miles west of Houston, is known for its beautiful bluebonnet fields, annual scarecrow festivals and its history-rich Main St. One of the town’s best-known and most successful family-owned businesses is Chappell Hill Sausage Co., which was started in 1968, after Frank and Clara Cone moved from Houston and purchased what was then known as Brazos River Processing, a very small custom slaughtering plant serving the area’s farmers. The purchase of the plant, which sits on about 15 acres of farmland, afforded the couple the opportunity to grow corn or hay on the property to sell locally when times were slow in the meat business.

A few years after the husband-and-wife team bought the business, Frank began making sausage at the plant and offering direct-store delivery to small, independent grocers in the Houston area. What started as a way to supplement the product offerings at the plant in the 1970s, evolved through the years, becoming a more prominent profit center.

The Cones had four children who grew up helping their parents by working at the plant as kids, during breaks in school and during college. That experience would pay off as they all would go on to help run the company full-time, in various roles as adults.

David Cone, the family’s oldest son who now is the company’s president, graduated with a degree in agricultural business from Sam Houston State University in 1987 and came to work in the family business to help his father. His mother was unable to work after getting sick and battling an illness for about two years before she died that same year.

“I still hadn’t figured out what I wanted to do [as a career] so I came back and helped him out and never left,” Cone said.

In fact, Cone and his three siblings are each doing their part to keep the family business not only surviving but thriving. His younger brother, Doug, joined the company after graduating from Texas A&M in 1989 with a degree in agriculture economics. After receiving his diploma, Doug’s older brother asked him to come help run the business, so he stepped in and never looked back. Today Doug is the company’s vice president and works alongside his brother to oversee daily production as well as focusing on raw material and ingredients purchasing and serving as the company’s IT expert. Meanwhile the brothers’ two older sisters, Diana Stepan and Tricia Cone handle billing, payroll and other accounting and administrative duties and are involved in the daily operations in support roles. David said one of his many roles includes serving as the face of the company at industry events while also working in a sales capacity to keep the company growing.

While the company’s second generation has made their careers of keeping the family business alive, Cone said the succession plan for who might run the company after the siblings remains to be seen as nobody in the third generation currently has plans to take the torch. With one of his sisters planning to retire in the next year, the topic looms large among the others as they look to the future.

“We need to figure that out,” David said of the succession plan. 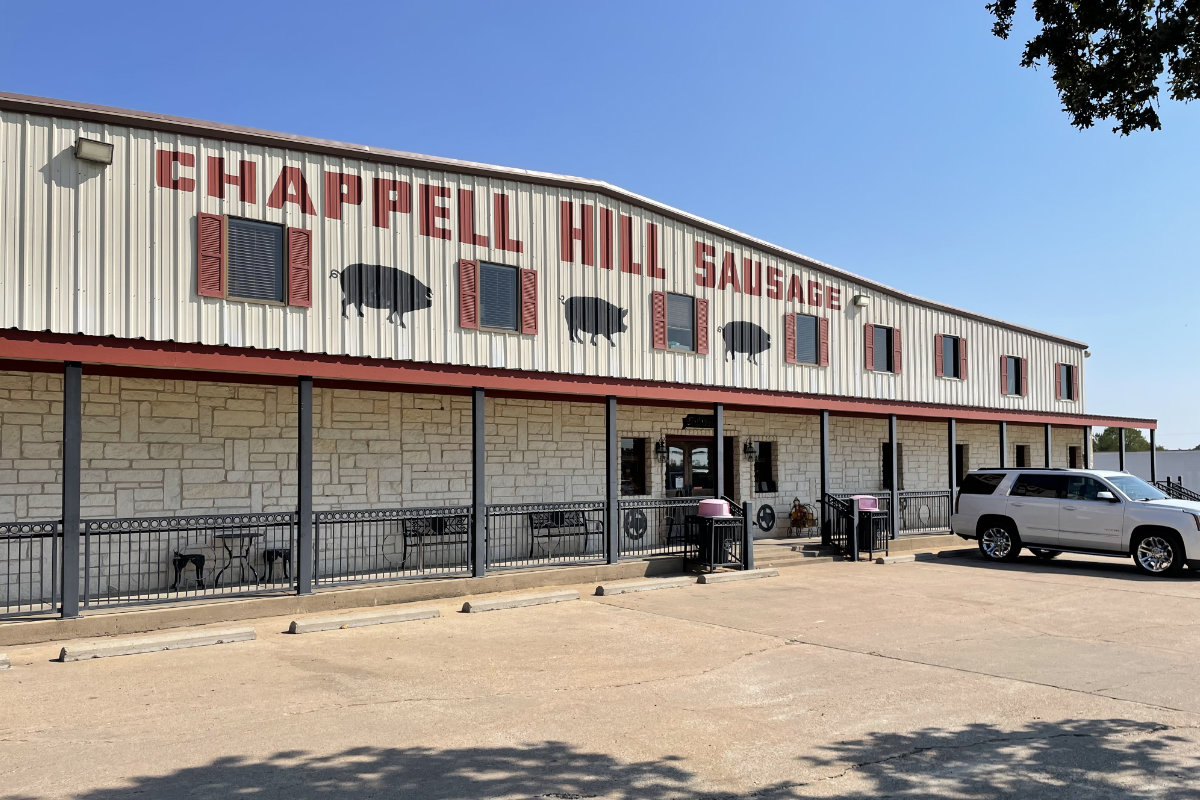 Chappell Hill's current plant was built in 1993, on what is now known as "Sausage Lane."

In about 1989, with the brothers both working alongside their father, the team realized that demand for the company’s sausage had grown to the point that custom slaughtering at the plant wasn’t the best use of the space or resources. The Cones decided to shut down its slaughtering operation and use that part of the plant to make even more sausage. That switch allowed the company to utilize what was the slaughtering floor to add a dedicated sausage kitchen, including more smokehouse space. Cone said it was then that the company, which had marketed the products under the trademarked name of Chappell Hill Sausage, officially changed the business name to match its signature line of products, and Chappell Hill Sausage Co. was born.

By the ‘90s, the original building, which sat where the company’s parking lot is today, was showing its age and the Cones realized it wasn’t going to be feasible to work out of that facility for the long term. By then, the laser focus of the business was on sausage production, and to grow to the next level, operations at the facility would need to comply with standards required to be a federally inspected plant, which wasn’t feasible using the aging structure.

“We built this plant in ’93 because the original plant was so old,” Cone said.

But swaying his father to agree to invest in building a new facility was a hard sell, Cone recalled, because he was convinced it would be too expensive. The elder Cone was only convinced of the need to build a new plant after his son took him to see a brand-new sausage plant, Southside Market in nearby Elgin, Texas.

“When I took him there and he saw it, that sold him,” Cone said. “My dad said, ‘OK, get the ball rolling.’” Unfortunately, Cone’s dad passed away just a year after the new plant opened, but the siblings kept the business moving forward.

One important aspect in the design of the new facility included a retail meat case and a restaurant situated in the front of the building with the sausage processing floor in the back. Customers can shop in the store’s butcher shop or eat breakfast or lunch at its cozy restaurant six days a week. Given the location adjacent to the highway, many commuters between Austin and Houston are drawn to the store to purchase fresh meat or for a roadside meal.

Cone said the retail store and the restaurant serve as effective test marketing tools for trying out new products because customers will provide immediate feedback.

“I use this as my testing ground,” Cone said.

Chappell Hill specializes in small-batch processing, with production runs of 200 lbs of product at a time and the company employs about 40 workers.

Daily production capacity is 25,000 lbs during an 8-hour shift, but typical daily production is about 15,000-20,000 lbs. Chappell Hill uses two Alkar smokehouses with a total capacity of 12 trucks in addition to one Enviropak smokehouse, all of which are used all day, every day. The smoke of choice for Chappell Hill products comes from real pecan wood or a pecan blend.

About 18 months ago the Cones updated the processing line with Vemag sausage stuffing equipment, which consolidated multiple lines to a single production line while increasing the volume of products made at the plant.

Two Multivac thermoforming machines are used to package the sausage at the end of the production line.

The company specializes in five core flavor profiles, including: Original, Garlic, All Beef, Pork and Venison and Jalapeno. It also makes occasional batches of niche items, such as jalapeno and cheese, hatch chili and some summer sausage. Most of the products from the plant are a blend of 80% beef and 20% pork. 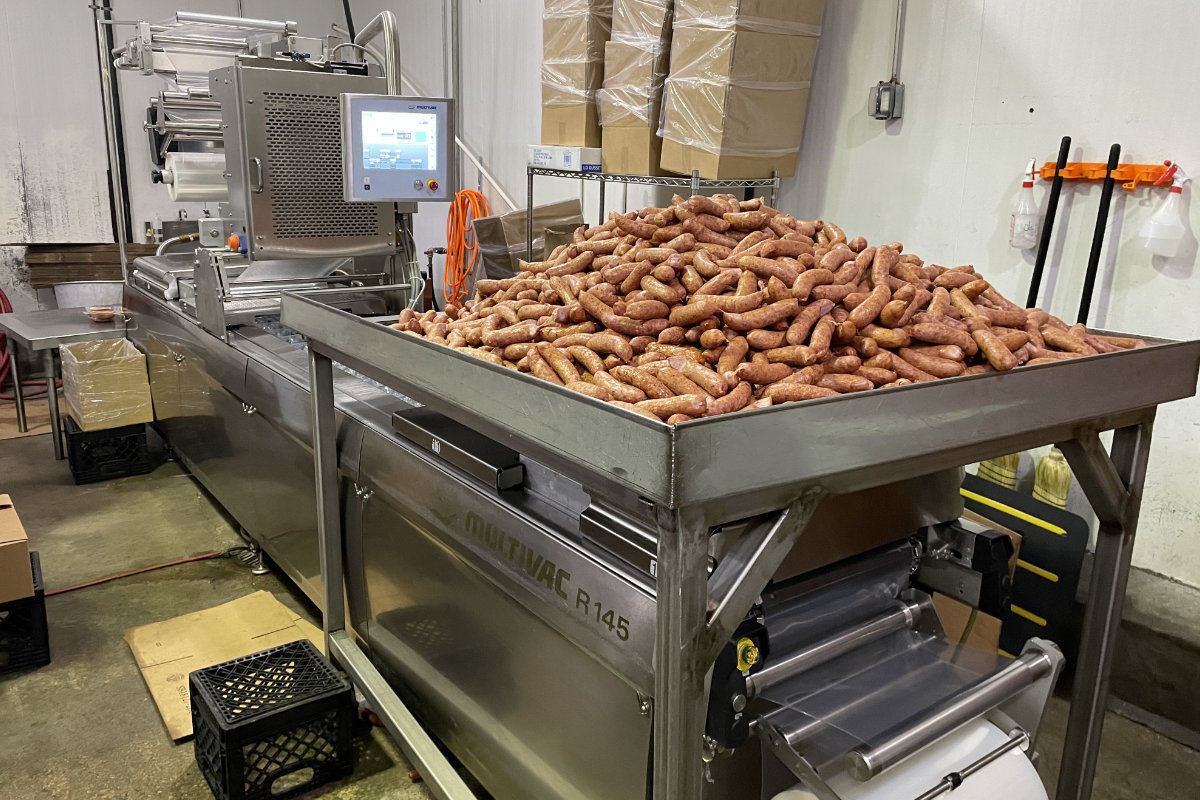 The products are sold at independent grocery stores, but Chappell Hill products are also delivered to warehouses to be sold regionally at Kroger, HEB stores and Walmart locations. Chappell Hill’s retail-heavy focus paid serious dividends as retail demand reached historic levels during the height of the pandemic but has since come back down to earth. While about 90% of the company’s business targets retail customers, the Cones are considering partnerships that would increase its production for foodservice customers beyond its somewhat limited current customer base that includes delivering its products to barbecue restaurants and Czech-style donut shops in the region, Cone said.

As of a few years ago, the company resumed its custom deer processing on a limited scale. Cone said game processing can be lucrative and for Chappell Hill, it has served to level out some of the seasonality of the business. During the holidays, Chappell Hill also sources hams from Morrilton Packing and sells spiral-sliced, honey-glazed hams to local customers. Morrilton is the same source for Chappell Hill’s bacon sold from its meat case.

“That is a good source of extra business during the winter months,” Cone said.

Private label opportunities will also likely be a part of future production at Chappell Hill, he added.

“In years past we kind of avoided it, but now we are starting to get more and more [private label] requests, so we’re starting to look at ways to figure out that piece of the business. I think that would be the next step in our growth.”