Meat processing and dairy companies struggled to attract, hire and maintain a qualified and consistent workforce before the COVID-19 pandemic. But current workers aging out of the workforce, lower labor participation rates and other factors combined make demand for skilled labor more acute, according to a recent report by the American Immigration Council (AIC), a non-profit organization that provides legal counsel to immigrants, and public education through research and analyses.

The report titled “Tending to America’s Food Supply: The Essential Role of Immigrants in America’s Meat and Dairy Industries” argues the current labor crisis highlights the vital role immigrants occupy in US food production. The AIC examined labor trends within the meat processing and dairy industries and discovered how those trends ultimately impact the prices consumers pay for meat and dairy products.

Steven Hubbard, PhD, is a senior data scientist with the Washington, DC-based AIC. Hubbard’s father is a retired country veterinarian who raised livestock in Iowa, so immigration issues are of particular interest to him and the research team at the AIC.

“I wanted to look at those workers who work with livestock, those who process the meat, those who transport the meat, and then dairy,” he said. “The biggest (finding) for me were those who raise our livestock are generally getting older, especially the people who are born in the US. Those who are foreign born are generally younger who work in livestock. Thinking about my dad back home, a lot of the hog farmers and cattle ranchers are getting older. Who’s taking the place of those workers?”

According to AIC research, more than 90,000 workers breed, raise, and handle animals on farms, ranches, livestock yards, and other facilities across the United States. One in five of these workers, or 20%, are foreign-born, a significantly higher percentage than the national share of foreign-born workers for all industries combined.

The “Tending to America’s Food Supply” report states, “Many livestock workers are also approaching retirement age. In the next 10 years, 29.8% of livestock workers will have reached the age of 65. Most of these older workers are US-born; only 11.1% are foreign-born. Of the workers who will not reach age 65 in the next 10 years, almost one in four (24.0 percent) are foreign-born. As such, the meat industry will increasingly rely on immigrant workers to take care of the animals that eventually reach America’s kitchen tables.” 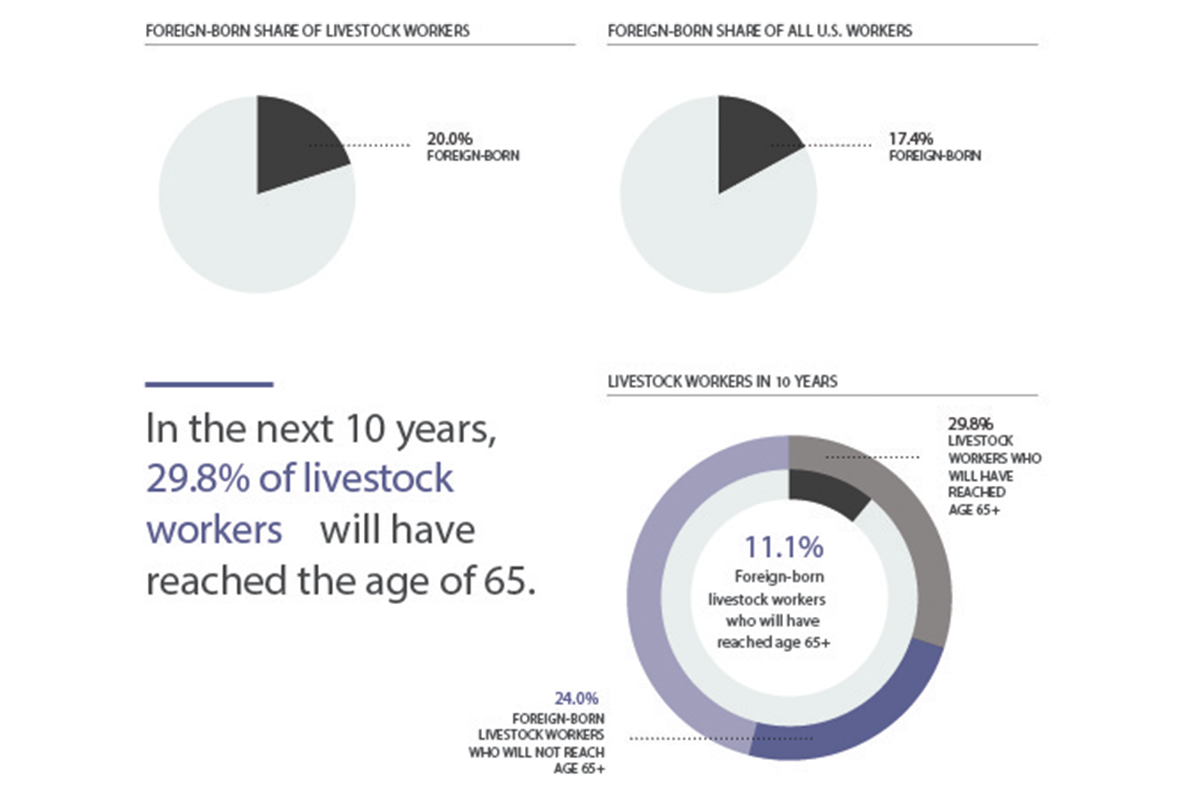 US meat processors historically have relied on immigrant labor. In the early 20th century, many foreign-born workers came from Europe. Today, processors employ people from many different countries in Africa, Asia, Central and South America. The AIC noted that in the meatpacking industry, foreign-born workers made up 45.4% of the workforce during the early days of the pandemic — 28 percentage points higher than the average share for all industries combined. But since then, the labor participation rate among meatpackers has fallen.

“This can be seen in the significant increase in online job postings,” AIC said in its report. “From 2017 to 2021, the number of unique online job postings for meatpacking workers increased by 86.4%, according to Ems/Burning Glass labor market analytics. For an industry already suffering from labor shortages before the pandemic, the Great Resignation has exacerbated supply shortages and, in turn, raised meat prices.”

Citing additional data from Emsi/Burning Glass, AIC said wages for workers in the meat and dairy industries have jumped since the start of the COVID-19 pandemic.

Leading processors have exemplified this trend in order to stabilize workforces. Livingston, Calif.-based Foster Farms announced in August that the company increased its entry-level wage to $19 per hour at its Kelso, Wash., poultry processing plant. Foster Farms added that employees also qualify for a comprehensive health care plan, disability and life insurance coverage.

Tyson Foods Inc., Springdale, Ark., began offering incentives to raise job satisfaction among its employees by offering more accessible health care, flexible schedules and childcare at some plants in addition to implementing a paid sick leave policy. In 2021, the company disbursed $50 million in year-end bonuses to front-line and hourly workers. Tyson had already invested more than $500 million in wage increases and bonuses.

To be sure, higher wages and benefits are a positive development for workers, although consumers bear some of the costs of these incentives.

The AIC, organizations representing meat processors and processors themselves have argued that expanding temporary work visa programs and long-term immigration reforms are critical to stabilizing the meatpacking workforce and prices for food.

For example, the National Chicken Council’s policy for immigration reform focuses on border security; simple improvements to the E-verify system; clarity in anti-discrimination laws; and an occupational visa category that could be tied to local or regional employment. NCC also advocates for a safe harbor to protect employers from liability unless the government can prove beyond a reasonable doubt that the employer failed to use worker verification tools in good faith.

Hubbard said the AIC works with local governments in rural communities with small populations that need more workers to support local economies and growth. It’s the economic piece of the immigration picture that gets lost in policy debates at the state and national levels of government.

“When we talk about the state and national levels, we get the political discussion – border insecurity and those type of things – instead of thinking about the economic benefits,” he said. “I think that needs to be interjected into our national and state-level politics.”

But, as Hubbard noted, progress toward immigration reforms has been erratic.

“There are some trends that are worrying. In 2016, we got more restrictive in our labor policies and then the pandemic happened,” he said. “I think workers are coming back, but we don’t know yet how many will be coming back and that’s a bit worrying.”