We use cookies to provide you with a better experience. By continuing to browse the site you are agreeing to our use of cookies in accordance with our Cookie Policy.
Skip To Content
Home » Soybean, corn production remains uncertain with various global circumstances

By Crystal Futrell and Ron Sterk

KANSAS CITY, MO. — The US Department of Agriculture’s August Crop Production report typically is the key piece of the year’s grains and oilseeds supply-and-demand “puzzle” that allows analysts to fine-tune forecasts and ingredient buyers and sellers to map out plans for the rest of the year and into next year. But dynamic factors like war, logistics, weather, lingering effects of the COVID pandemic and possible recession have complicated those efforts this year.

What is known is that the USDA forecast record-high US soybean production in 2022, corn production is forecast lower, the winter wheat crop is known with seemingly good quality across the board and the spring wheat crop is much larger and in far better shape than a year ago as harvest gains momentum.

Soybean oil and soybean meal have traded the spotlight in driving the soy complex. Wheat, corn and oilseeds are again flowing from Ukraine’s Black Sea ports even as the war in Ukraine drags on. The value of the US dollar that was near 20-year highs not long ago has been waning and now may provide a boost to US exports. Crude oil prices are well off recent highs, possibly dampening demand for biofuels, especially corn-based ethanol. Freight rates are down across most modes of transportation, but logistics remain a challenge.

Hot, dry weather has challenged fall crops in the United States and Europe but recently has improved in the United States, while late-season weather surprises can never be ruled out. And finally, on-again, off-again assessments of domestic and global recession continue to cloud the broad economic picture, adding uncertainty to the demand picture.

The war in Ukraine has been the dominant factor in the world’s grain markets since Russia’s invasion on Feb. 24. The immediate disruption of exports from a region that supplies nearly 30% of the world’s wheat and significant amounts of corn and oilseeds (mainly sunflower seed and products) quickly sent prices soaring and aroused fears of food shortages, a result of both supply and price, especially in Middle East and North Africa countries that are highly dependent on lower-priced shipments from the Black Sea region. Shipments by sea from Ukraine shut off almost immediately. Grain exports from Russia continued, but logistics were complicated by high insurance rates and other factors. India stepped up quickly and then backed out just as quickly as a heat wave slashed wheat crop prospects after several years of record-high production. An expected (hoped for) significant boost to US wheat exports never materialized as US prices generally remained too high even as global export prices soared.

The world breathed a cautious sigh of relief when Ukraine, Russia, Turkey and the United Nations on July 22 signed a pact to allow the safe transit of shipments from Ukraine’s Black Sea ports. The first 12 vessels to leave contained corn and oilseeds or oilseed products. The first vessel containing wheat (3,050 tonnes) arrived in Turkey on Aug. 14, according to the Joint Coordination Centre based in Istanbul, Turkey. As of Aug. 15, a total of 18 ships containing various grains and oilseeds had left Ukrainian ports after nearly a five-month hiatus. A ship with the first humanitarian food aid cargo from Ukraine since the war began loaded with 23,000 tonnes of wheat left Ukraine’s Pivdennyi port earlier this month with an unknown arrival date in Ethiopia. The UN-chartered shipment was funded by donations from the World Food Program, the US Agency for International Development and private donors.

But the impact of the war remains with total grain production in Ukraine forecast at about 50 million tonnes in 2022, down 42% from a record 86 million tonnes in 2021. Grain exports in 2021-22 (which ended June 30 for Ukraine) were 48.5 million tonnes, up 8.5% from 2020-21, but exports so far in 2022-23 were only 2.65 million tonnes, down 46% from the same period a year earlier, according to Ukraine’s agriculture ministry, with 36% of the 2022-23 total exported in the first half of August since the signing of the export accord. The export pact as well as the war itself remains a major concern for grain markets.

“Russia-Ukraine is not going to get solved tomorrow,” said Stephen Nicholson, global sector strategist – grain and oilseed, Rabo AgriFinance, adding that the conflict will continue to increase volatility in the grain markets. “I expect prices for corn, soybeans and wheat to remain very strong over the next two to three years, above the last 5- to 10-year averages.”

In the shorter term, he noted price support for corn, soybeans and wheat from strong basis levels, while a combination of good demand and production uncertainty will result in tighter ending stocks for all three commodities than indicated in the Aug. 12 USDA World Agricultural Supply and Demand Estimates (WASDE) report.

“The higher US dollar is negative to commodity and grain prices,” said Steve Freed, vice president of research at ADM Investor Services. “The key to US export demand is 2023 South America crops, Russia wheat exports and Ukraine corn exports.”

“We think the bump in the yield was premature,” said Brian Harris, executive director and owner, Global Risk Management. “We still have a few weeks to go before we can determine what this number is going to look like.” 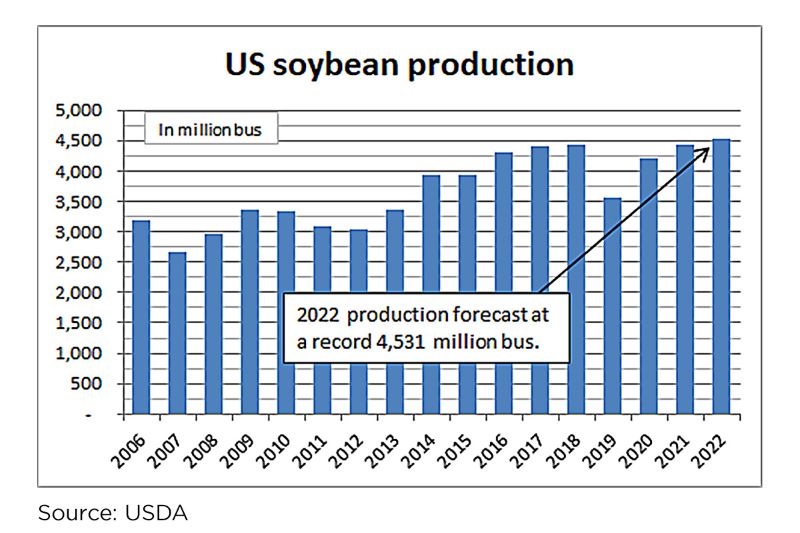 Nicholson agreed, saying he “was a little surprised they (USDA) took the soybean number up.” Soybeans in Iowa “look ragged,” he said, based on recent observations, noting that the crop improves in the eastern Corn Belt. He expects the USDA soybean yield forecast will come down.

The USDA in its weekly Crop Progress report rated the soybean crop in the 18 major growing states at 58% good to excellent as of Aug. 14 compared with 57% a year ago. The crop was 74% through the pod-setting stage that is key to determining yield potential.

It seemed the market was in agreement with the analysts. After the Aug. 12 Crop Production report was released, soybean futures fell sharply only to recover all of their losses before ultimately settling higher on Aug. 12.

“From our perspective, we’re plugging in 49.6 bus per acre as the national yield, which is clearly below the 51.9 bus per acre that the USDA published, but our number is based off of our old-school, boots-on-the-ground technique where we talk to different farmers and clients across the regions to get a feel for what they’re seeing rather than relying on satellite imagery like the USDA does,”  Harris said.

Some analysts, however, feel the satellite data is more reliable, pointing to historical accounts where farmer surveys were consistently below the final yield and production numbers.

“If we use our projected yield number, then I disagree with USDA raising the soybean ending stocks number by 15 million bushels,” Harris said, adding he believed the final amount would be closer to 170 million bushels.

One standout in the soy complex that has garnered much attention from analysts lately is the crush margin. For several months the soybean oil portion of the crush has been well above historical levels, but soybean meal futures have soared recently as the demand for both domestic and international usage has intensified. In August, the USDA noted a private sale of 103,400 tonnes of soybean cake and meal for delivery to Mexico during the 2022-23 marketing year. Also, before the August soybean future expired, it reached a new contract high of $17.40 a bushel, indicating margins were high enough on the backend to cover firm prices on the frontend. Nearby soybean meal futures, meanwhile, have been trading at multi-year highs.

From analysts’ perspectives, the main things to watch for in coming months are weather, geopolitics and what’s being planted in South America.

“It’s all about the weather for the soybean complex,” Harris said, who projected November soybean prices to range from $12.50 to $12.75 a bushel. “Even with ideal weather, the odds of pushing up over 51.9 bushels per acre are pretty slim. But if we do have any weather problems, then you’re definitely going to take out those $15.75 a bushel highs.”

The slowing economy in China, the world’s leading importer of soybeans, could also have an impact on prices.

“If anybody wants to get overly bullish with the soybean complex over poor weather, you’ll have to consider the demand from China,” Harris cautioned. “It’s going to take China a while to rebuild its economy, maybe a minimum of six months, especially if they continue enforcing their zero-COVID policy, which isn’t good for long-term demand.”

Weather and faltering export demand weren’t the only concerns for the soy complex.

“It’s important to keep in the back of your mind any disruption or aggression beyond what we’ve already seen from Russia,” Harris said.

After six months of active warfare, the markets have somewhat settled into a new normal, and analysts don’t expect major price swings related to the conflict unless hostilities increase.

The early planting and growing season for South America also was expected to be critical for the soybean complex.

“We’re about a month away from the Brazil crop going into the ground, and most projections have raised the 2022-23 crop production by 18%, and the USDA raised its forecast for Argentina’s 2022-23 soybean crop by 16%,” Harris said. “So, there’s a lot of optimism for South America because we’re all counting on them to get us back out of the hole that we’re currently in because our global ending stocks are still relatively tight on soybeans, even with the USDA’s large projection for the current domestic crop. But all that optimism could start to turn sour for either of those countries during the winter growing season.”

Some western Corn Belt production areas struggled with hot, dry weather in recent weeks, although temperatures have since cooled and some much-needed rain has fallen. Corn area in drought as of Aug. 9 was 28%, with 72% in Nebraska, 74% in Kansas, 31% in Iowa and 19% in Minnesota. Only 6% in Illinois, 4% in Indiana and none in Ohio.

“I think the USDA corn production and yield numbers are not so bad,” Harris said. “If anything, we might be a touch lower. Weather hasn’t been horrible this year, but it’s certainly been less than ideal especially in the western region. We’re pretty much done with pollination now, so it’s just a matter of finishing weather.”

Again, Harris said he thought the corn carry over number was “pretty close” to expectations. 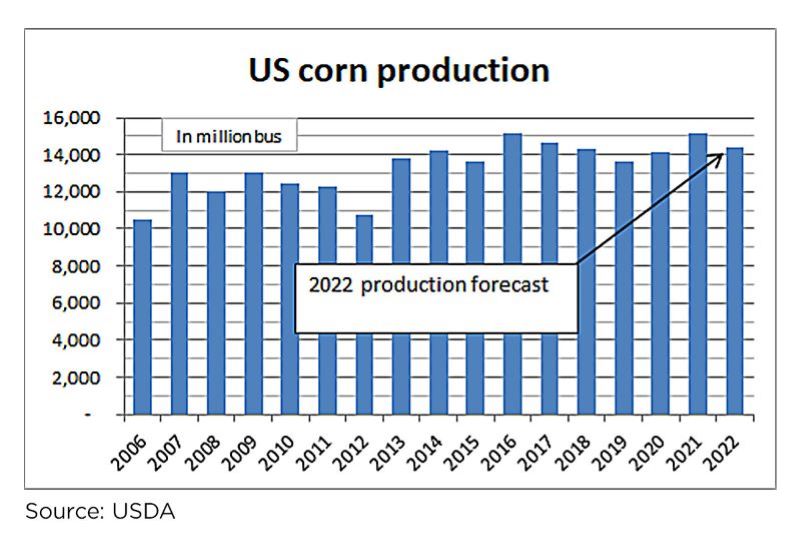 The USDA lowered its 2022-23 US corn export forecast by 25 million bushels from July. The resumption of Black Sea exports by Ukraine initially were corn and oilseeds, not wheat. While much talk has been about wheat exports from the Black Sea region, rightly so because wheat is a food grain, Ukraine actually exports about 30% more corn than wheat in typical years.

Corn prices have fluctuated during the Ukraine-Russia conflict like those of soybeans and wheat. Freed expects December corn futures to range between $6 and $6.50 per bu.  Harris thought December corn could drop to the $5.50 to $5.75 per bushel range as harvest begins, down from about $6.20 recently.

Analysts will continue to debate corn and soybean supply and use until revised estimates are issued by the USDA in the coming months and up until the final estimate is released in January 2023, with Freed noting that the August USDA forecasts are the only farmer surveys that have been below final estimates over the last three years. For wheat, the USDA’s Small Grains Summary will offer a final US production estimate. The demand side of the equation remains hard to call for all three commodities, and this year war, weather, recession and other influences make it one of the most difficult ever to forecast. And the analysts tend to agree that weather and (geo)politics are the key things to watch over the next few months.

Operations Markets US Dept. of Agriculture
Subscribe to Our Newsletters