“We want to be known as a company that would offer our customers only food that we know is good enough to feed our own family.” With that statement Joe and Cherilyn Davis make it clear that quality and consistency is a virtual bylaw at their Davis Meat Processing business in Jonesburg, Mo.

The family owned and operated processing plant they started in 1984 was built from the conversion of a pole barn and today has grown through six expansions into an 11,000-square-foot center for custom slaughter and processing, private labeling, and retail meat sales.

Their measure of success can be counted in many ways, such as the more than 1,000 awards they have won in cured product competitions at state and national levels. Their professionalism is so well regarded that in recent years they’ve dialed back entering some competitions and volunteer their time judging at such events.

Most of their products are sold under the Pride of the Prairie label, a nod to the Prairie Township where Joe was born. But the pride factor isn’t just in their products and creativity. It is also apparent when asked for their titles at the business. Joe, Cherilyn and their daughter Jennifer Witthaus call themselves “members,” meaning members of the corporation that own the business.

Originally a custom kill and processing plant for livestock owners, Davis Meat Processing has never abandoned those roots, bringing in farm animals from as far as 90 miles away. They went under state inspection more than 15 years ago and in 2020, began operating under federal meat inspection. Today 22 accounts have Davis private label their finished meats for sale at farmers markets and other retail areas. The demand for Davis’ custom service has the company booked for processing custom livestock for at least a year out. Joe, 66, estimates that about 90% of the hogs they process are designated for sale under the producers’ private label.

Joe, who once worked for a packing company and later partnered with a friend to operate a processing business, explains that when he and Cherilyn bought the Jonesburg pole barn, they planned their expansions with an eye toward future growth.

“We needed more room and had to improve our product flow from the kill floor all the way through to the finished product area,” he said. “Then we took out an older cooler area and expanded our chill space and made a larger kill area.

“We didn’t want the facility to look like a set of small buildings, so we extended our roof area to cover everything and give our red and white plant a different look. We are located just off Interstate 70 about halfway between St. Louis and Columbia and from a distance it can be more readily seen and identified.”

When asked about their roles as members, Cherilyn, who handles the financial records and accounts, said there is redundancy at the critical positions in the plant:

“Joe does most of the meat cutting and equipment repairs and maintenance. Our daughter Jennifer and I also cut meat and can take over other roles as needed. That’s very important. Jennifer, a graduate of the University of Missouri, holds a degree in biological engineering with an emphasis on food processing. She’s the smart one,” Cherilyn said.

Davis Meat Processing is run by a family that is totally knowledgeable in every aspect of its operations. Joe claims he learned the trade from “the school of hard knocks.” They all assert that they learned processing and operational techniques from attending state and national trade shows where other small processors were eager to share their knowledge.

“I don’t know how many times I had a problem and needed help and could just pick up the phone and contact another small plant owner who gave me expert advice,” Joe said.

Not only do the Davis’ feature three generations of its own (a total of five family members) in the operation but have nine other employees as well.

And when it comes to appreciating other processors and associations for the help they’ve received, they also give back with a flourish. Cherilyn was president of the Missouri Association of Meat Processors in 2002; Joe served in that capacity in 2012, and Jennifer led the group in the same role in 2017.

Davis Meat Processing operates a website davismeat.com. They also use two billboards to promote and direct traffic to their plant. In addition to their support of local groups like the 4-H and Future Farmers of America, they also allow use of their plant for meat science students at the University of Missouri to sharpen their skills and knowledge in areas like carcass judging and evaluation. They promote their meats at product and home shows where handing out tasting samples has greatly boosted their retail sales. 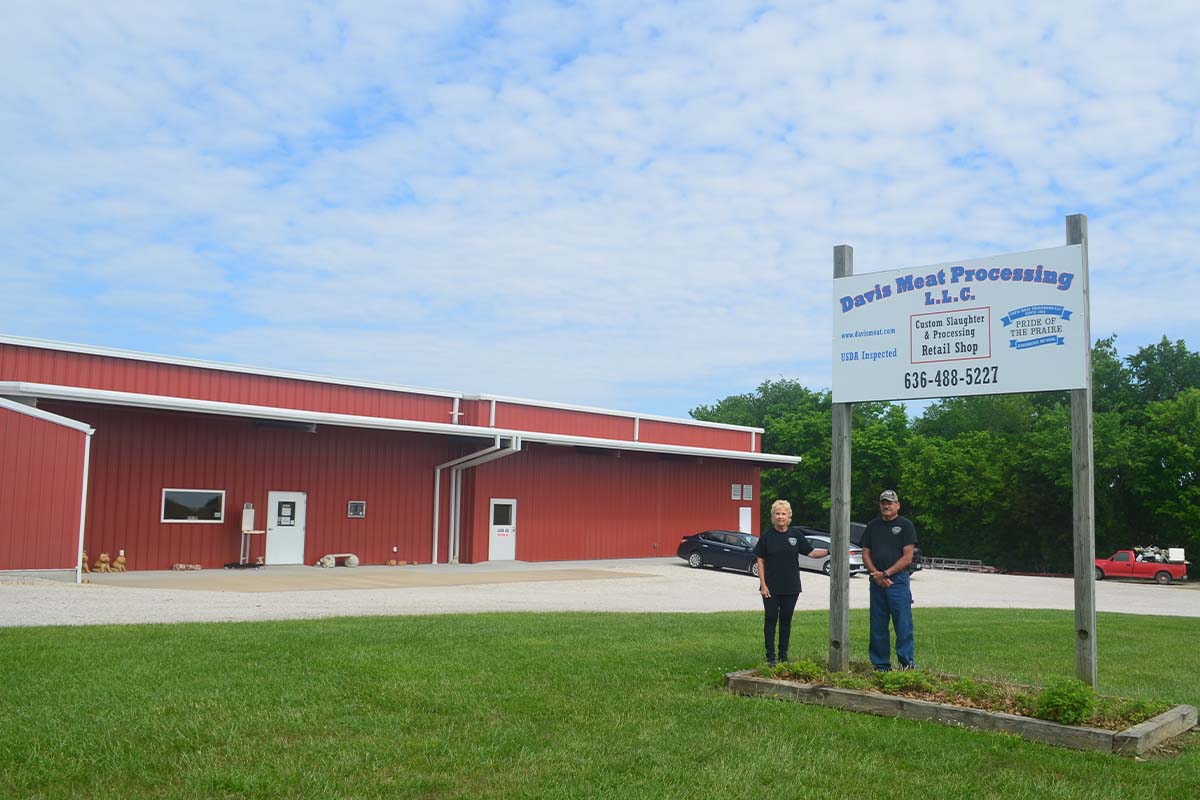 Joe and Cherilyn noted that they do a brisk game processing business and are one of the few plants that still accepts whole, unskinned deer carcasses. They have been known to process more than 1,000 deer for customers.

The Davises admitted that continuing to grow is part of their strategy, but getting reliable help is difficult.

“We get some folks who want to quit after a week or even after a day,” said Joe. “It’s hard work and in today’s society, too many people just want to do something easy.

“Another impediment is finding replacement parts for old but very reliable equipment. You just can’t get those parts when you need them or maybe at all. That’s a complaint we hear from many other processors who are almost forced to buy a new machine, while the one needing a part or two is what they really want to use.”

In 2015, a renovation added 1,500 square feet of retail area to the operation, a change the Davises said was a dream come true.

“That was one thing we always wanted to do to help us show off our products,” Cherilyn said. “We get a lot of traffic from the Interstate highway, but we’ve backed off on the idea of shipping products to retail customers because of the exorbitant shipping costs everyone experiences today.”

A trip around the retail area at Davis Meat Processing is indeed a trip on the yellow brick road to culinary heaven. The plant’s hickory smoked bacon is one of its best sellers with flavor profiles that include cinnamon rubbed, pepper and Cajun BBQ bacon as well as a country cured version.

While competitions haven’t been a big push as of late, Davis made one entry recently that shined. In April the company participated in a competition by entering its old-fashioned summer sausage that earned the company the Best of Show award in the Hermann Sausage Festival, a prize fight for bragging rights in one of the nation’s top specialty cured meat-maker battlefields.