It’s in the can

Mennonite Central Committee is a faith-based organization, headquartered in Lancaster County, Pa., with offices across the United States and Canada. It carries out a somewhat unusual means of meat processing that helps provide food to people around the world who don’t have enough to eat.

The group makes use of large numbers of volunteers and some staff who cook and can meat, all under federal meat inspection. This meat canning project began right after the end of World War II.

Amazingly though, MCC has been carrying out a mission to help people much longer – for almost 100 years – dating back to 1920. And that 100-year history is tied to today.

“Mennonite Central Committee was formed almost 100 years ago in response to requests for aid from Russian Mennonites living in what is now modern-day Ukraine. They were being plagued by violence from the Russian civil war,” explained Joe Miller, interim coordinator of the canned meat project for MCC.

Some of the canned meat is going to Ukraine today. The product also feeds people in Ethiopia, Syria, Haiti and Ecuador. Over the years, it has also fed people in Somalia and Sudan. Today, the organization cans meat to help feed people, no matter their national or political background. Since 1946, volunteers have gathered to cook and can meat that MCC sends to hungry people across the globe, including refugees in camps and victims of natural disasters.

The mobile canning takes place across the United States and Canada – in Pennsylvania, New York State, Kansas, and other states and Canadian provinces.

“The meat is processed, cooked, sealed in cans and labeled by volunteers who work on the meat canning project,” Miller said. The meat includes, beef, pork, chicken and turkey, which this spring, was being processed and canned in New Holland, Lancaster County. Many of the volunteers in that area are Mennonites and Amish, but volunteers of all backgrounds work on the project.

Every year, the MCC Mobile Meat Canner travels across the United States and Canada, meeting volunteers who will prepare cans of meat. More than 30,000 people a year volunteer to fill, weigh, wash and label every can.

When the mobile cannery arrives at the designated location, it is unfolded and attached to the building. The boneless and skinless meat arrives in boxes encased in ice at a temperature of 35 °F. Then, the meat is ground or cut by hand into 1x1-inch chunks. The meat is brought onto the canner and emptied into a large steam-jacketed kettle, which heats the meat. The meat is stirred with large plastic stirring sticks and salt is added.

Once at the correct cook temperature, volunteers put the meat into cans. The cans are weighed, and volunteers add or remove meat until the cans weigh between 1.92 and 1.97 lbs. Next, a volunteer takes the weighed cans and puts them through the sealing machine. Volunteers stack the cans in baskets, and they are placed in a large retort, a pressure cooker where the canned meat cooks for 13 minutes at 246 °F at a pressure of 15 psi. After the cooking is complete, the baskets are cooled using a continuous flow of water until the cans are safe to handle.

The cans are hand washed and dried by volunteers who then apply a label to the can indicating what kind of meat is inside. The labeled cans go through a printer which applies production and expiration dates, before they are placed in boxes, with 24 cans in each box. In a brief stay at a warehouse, the canned meat is incubated and held to make sure the product is safe. Then the meat is sent by MCC around the world to those in need.

This past year, for example, 550,440 lbs of canned meat were shipped to Burkina Faso, Ecuador, Ethiopia, Jordan, Syria, Zambia, and the United States, including Puerto Rico. 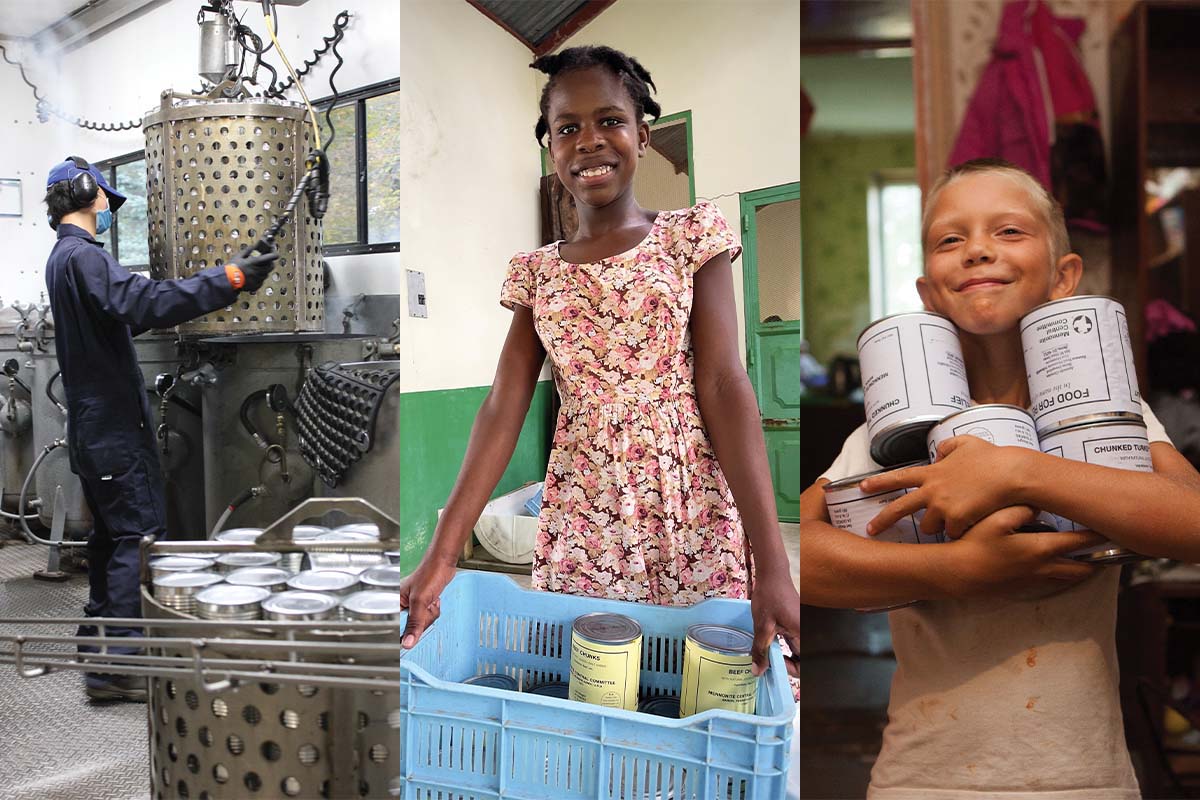 John Hillegass worked with Mennonite Central Committee’s mobile canner for more than 13 years, including overseeing the design and construction of a new mobile cannery seven years ago. Currently working as a consultant to MCC’s canning project, he is trained in food safety and thermal processing of food, with certifications from Louisiana State University and Pennsylvania State University.

He explained the Anabaptist religious denominations, which include Mennonites, Amish and Brethren, wanted to help allay the onset of hunger in Europe and other areas after World War II. “Since there were shortages of meat especially, canning and shipping of meat would be a good way to overcome hunger, especially among refugees in camps in bombed cities after the war,” he said.

“At first, glass jars were used in wooden boxes,” Hillegass explained. “But since the journeys for the food were pretty rough, one in four jars containing meat was broken on the ships. There were big messes, smell and waste. People in the program were wondering if there was another way to do this. Mennonites are accustomed to canning. So how about using metal cans for the meat?” Instead of each church buying equipment, why not do it using a mobile canner, on the road, with a wagon or trailer to tow it?”

The project started in the Shenandoah Valley in Virginia, then expanded across the US, then to Canada, with about 34 locations, traveling more than 10,000 miles a year, creating canned meat from chicken, turkey, pork and beef that happen to be the four major meat species processed in the US and Canada.

Which makes sense, because the meat comes from federally inspected plants and is obtained through donations. Like the plants the meat comes from, the whole process is done under federal inspection because of the cooking and further processing that takes place.

“The canning season extends from October to May. We stop during the summer, because of the heat,” Hillegass said. “During the season, we create over 600,000 cans of meat, which comes out to be about 1 million lbs. We’re the world’s only meat canning factory on wheels, built on a tractor trailer chassis.”

One of the major locations for the meat canning is North Newton, Kan., about 30 miles from Wichita. During the onset of COVID-19 in 2020, the canning project faced special challenges, like the spacing out of volunteers. North Newton could handle those challenges.

There was also distribution of canned meat – including the United States – where people were affected adversely by COVID-19, through isolation, job loss and school closures.

During 2020-2021, according to Hillegass, 320,000 cans or 480,000 lbs of meat were distributed, about half the total of a normal year. “We are grateful we were able to do that, considering what was going on,” he noted. “Everyone having a lot of grace and understanding – not just the volunteers, but also the meat suppliers and the can suppliers.”

Jason Unruh, who was a canning operator and who lives in Peabody, Kan., 15 miles east of Newton, is a wheat, corn and soybean farmer with his dad on a 2,000-acre Century Farm when he isn’t doing meat canning.

“I don’t remember exactly what put meat canning in my head, but I had heard stories from other people who were doing it, and from volunteers who got involved with it. I knew I wanted to perform some kind of service, something where I could help people, and this seemed like something I could do that would make sure people have enough to eat,” said Unruh, who is 33 and a member of Tabor Mennonite Church in Newton.

Canning operators travel with the mobile canner, which Unruh did right after he graduated from Kansas State University. He is still involved in meat canning, but now works as a volunteer at the Newton site. He encourages other people to volunteer on the canning project and he recruits people to become canning operators. “I know that some people want to go overseas to help people. But meat canning provides food for people who need it. I’ve never been hungry in my life, so when you do this, it really means something to you and to them.”

“It was great to be a meat canner,” he says. “We traveled together, we worked through any issues we faced, and we solved problems. We stayed in homes; people hosted us. That was good.”

“And we ended up meeting people across the country. I went to 17 states, as far southwest as Oklahoma and as far east as Pennsylvania and New York State. Canadian provinces, including Manitoba and Ontario. Now, I like being a volunteer, rather than traveling as a canning operator.”

Linda Espenshade, US news coordinator for Mennonite Central Committee, reported recently that 500 cartons of canned meat were sent to Puerto Rico. Some went to feed Haitians on the island, while a majority went to churches to serve people in need in communities in inland Puerto Rico. 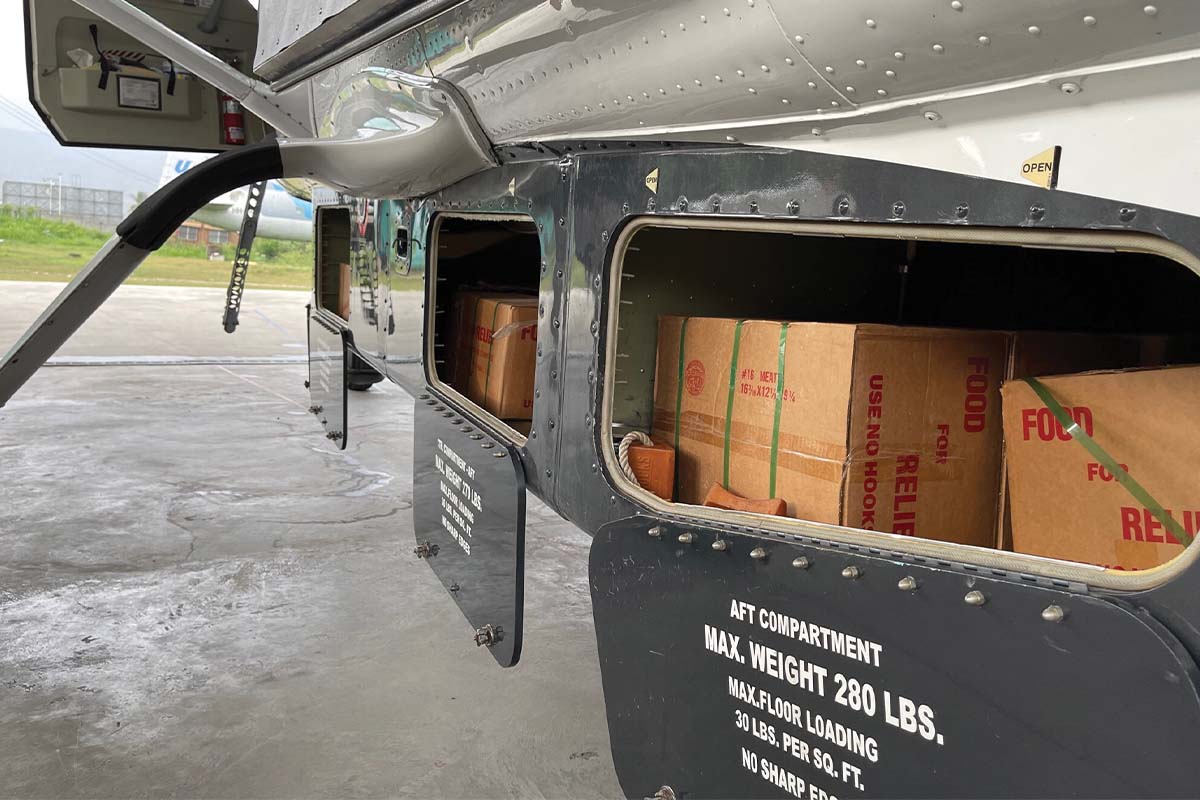 “Haiti is in the midst of dealing with government turnover, economic crisis, pervasive gang violence and another earthquake,” she said. “As a result, some Haitians are fleeing their country. It’s a good example of our meat being used to help people in crisis.”

Last November, several dozen Haitian immigrants had arrived in Puerto Rico – considered a gateway to the United States – and were being detained by border patrol, Coast Guard and US Immigration and Customs Enforcement (ICE), according to Jean Carlos, Arce, Puerto Rico program coordinator for MCC.

After the Haitians are released by border patrol, Haitian Catholic priest the Rev. Olin Pierre Louis, helps feed and house the immigrants until they can contact family on the US mainland. Arce says in the past, a lot of Dominicans were coming to Puerto Rico. But now, it is mostly Haitians. “There was a great need for canned meat in Puerto Rico, due to Hurricane Maria and earthquakes in 2020. A month ago, we received about 15,000 cans of meat here – a lot going to churches for their food banks – so it worked out for the Haitians, as well,” Arce said.

Father Olin, pastor of San Mateo (St. Matthew) de Congrejos Catholic Church in the Santurce neighborhood of San Juan, said he tries to help the immigrants when they arrive or are released by US officials.

“When the Haitian immigrants arrive here, they get detained by ICE and they call on me to help them,” Father Olin said. The priest was contacted by ICE, and the agency asked if he could translate for them, because Haitians speak Creole, not Spanish. After the earthquake in Haiti 12 years ago, he came to Puerto Rico and organized two large shipments of canned meat to be taken to Haiti.

“When the meat arrived, the Haitian people prepare their meals in many ways,” he said. “With rice, corn, plantains, with macaroni, spaghetti – the people are very happy with the meat that they are able to get through this ministry. And they always ask me, where do you get this meat? It is so good!”